Spanning the roughly 226 square miles that make up Tucson, Arizona, are plenty of scenic views, but many who live in the desert mecca are in need of help.1 The city is also home to a large number of people who are dependent on drugs and alcohol. 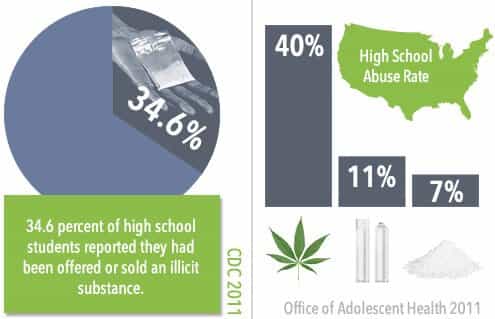 Substance abuse rates are higher among Arizona residents than the rest of America combined, and Tucson bears no exception. Around 31 percent of adult Arizonans reported lifetime illicit drug use in 2010.2

Rates of drug abuse are specifically concerning among teenagers in Arizona. In 2011, 42.8 percent of high school students reported ever using marijuana.3 In addition, 12.7 percent had used inhalants, 10.5 percent reported lifetime cocaine use, 4 percent admitted to having used heroin, and 5.2 percent had used methamphetamines at some point in time.4

Parents are often surprised by the high rate of substance abuse among teens, but these drugs are often not difficult for young people to obtain. Also in 2011, 34.6 percent of high school students in the state reported they had been offered or sold an illicit substance by someone at school at some point.5 Nationwide, rates of substance abuse are lower among teens than in Arizona. National statistics for marijuana use by high school students in 2011 reached 40 percent; inhalants use was at 11 percent, and cocaine use at 7 percent.6

In 2003, Tucson was leading the nation in the number of annual drug arrests, and the figure was only continuing to escalate, especially among specific racial demographics. Between 1980 and 2003, the increase in drug-related arrests in Tucson was dramatic, at 887 percent.7 During that timeframe, arrests of black people for drug-related crimes rose by 1,184 percent.8

Marijuana is the most commonly reported drug of abuse in the state with 91 percent of individuals who reported substance abuse in 2010 citing marijuana as a favored drug.9 This is significantly greater than the 76.6 percent of people who abuse drugs reporting marijuana abuse nationwide.10

Marijuana is often thought of as the safest drug of abuse, but it comes in tow with a hefty list of adverse side effects and unhealthy outcomes. In younger individuals who use or abuse the drug, studies have reported impaired brain development as a consequence.11

In addition, younger age groups are being seen more frequently in emergency rooms for issues stemming from abuse of many illicit drugs. Abusing synthetic drugs like spice can be deadly. In 2010, 11,406 cases treated in emergency rooms across the nation involved synthetic marijuana, and 75 percent were among individuals aged 12-29 years old.12

Substance abuse carries many risks. Normal side effects of substance abuse range from headaches, nausea, and constipation to paranoid thoughts, delusions, hallucinations, psychosis, depression, suicidal ideation, and other emotional and cognitive symptoms that can ensue within minutes of using certain drugs. Nonetheless, these may not even be the most severe outcomes. For example, heroin addicts may develop skin infections or contract STDs from unsafe needle-sharing practices. Cocaine abuse imposes serious risks of cardiac arrest and malnourishment. In 2013 alone, 327 people died in Pima County, Arizona, from drug-related overdoses.13

Drug-related criminal activity is highly prevalent in the Tucson area. In federal prisons alone, 94,700 inmates who were incarcerated as of July 2015 had a history of drug-related offenses.14 The state’s inmate population is expected to hit 43,000 people by 2016.15 Nationwide, 1,561,500 people were being housed in correctional facilities at the end of 2014.16

Most of the time, law enforcement is well aware of trafficking practices and the people involved in them. The immediate goal isn’t to arrest every single person who is transporting a bag of marijuana across state lines. If a dealer can lead law enforcement to bigger prospects with links to the international drug trade, officials may just keep a watchful eye on those individuals until they can make a large-scale drug bust.

Admissions to treatment within the High Intensity Drug Trafficking Areas of Arizona in 2010 were numerous. Cocaine use was cited by 492 people admitted to treatment that year, in addition to 1,660 citing marijuana abuse, 1,585 citing heroin use, 572 citing abuse of other opiates, and 1,679 citing methamphetamine abuse.17

Possession of marijuana can carry sentences of two years in jail while narcotics impose heftier sentences of 3.75 years. Trafficking illicit drugs like methamphetamine can bring long prison sentences in addition to fines.18 Trafficking harder substances like cocaine and heroin can result in sentences of over 12 years in prison.19,20

The Downfall of Drinking 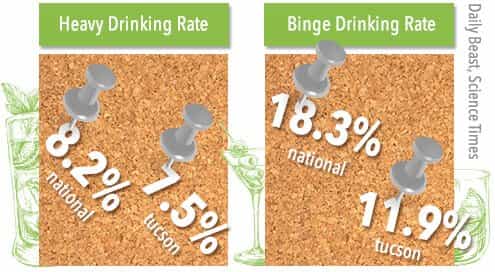 The desert city ranked 26th in a listing of the nation’s drunkest cities.21 With residents consuming an average of 12.57 drinks per person every month, typical drinking rates in Tucson are below the national average of four drinks per week.22,23 When it comes to those who admit to drinking heavily, the rate in Tucson is 7.5 percent compared to national rates of 8.2 percent in 2012.24,25The rate of binge drinking is also lower in Tucson at 11.9 percent versus 18.3 percent nationally.26,27
Every year, four people for every 100,000 living in Tucson die from alcoholic liver disease.28 Deaths stemming from alcohol use in the entire US, not including accidents and homicides, reached 29,001 in 2013, and those from alcoholic liver disease totaled 18,146.29
Alcohol is often overlooked as a cause of criminal activity, but it is a highly prevalent substance of abuse in the southern Arizona region, and its use contributes to crime. On the upside, DUI arrests are down in New Mexico. In 2013, 29,163 people were arrested for driving under the influence in the state, down from 32,171 the year prior.30 In Tucson specifically, 2,686 DUI arrests were made in 2013, down from 2,470 the year before.31

Mental illness runs rampant among the substance-abusing population. Common disorders that co-occur with substance use disorders include:

Some 294,000 of the 6.5 million people living in Arizona suffer from at least one mental health disorder.32 That’s around 4.5 percent of the state’s population. Treatment is highly encouraged for anyone suffering from any type of mental health issue. Without it, many mental health conditions can worsen, as can substance abuse habits.

In 2006, 979 people took their own lives in the state of Arizona.33 Many of these individuals were suffering from episodes of depression, anxiety, and other mood stability issues.

For some people, it can be tough to imagine getting help for substance abuse. Of the 22.7 million who needed rehabilitative services in 2013, just 2.5 million got them. The reasons for which treatment isn’t sought or secured vary greatly, but there are ways to overcome most barriers to treatment so individuals can get the help they need.34

Nine out of the 10 facilities providing treatment for substance abuse and mental health issues in Tucson offer outpatient care.35 Several of these facilities also provide financial assistance to their clients, with a handful offering sliding scale treatment options. This enables those individuals who are struggling financially to still proceed forward in getting help. With sliding scale options, the cost of treatment is based on the individual party’s income. This type of treatment does generally require some form of employment and is often only offered on an outpatient basis, which facilitates people in keeping their respective forms of income flowing. Tucson is also home to 29 sober living facilities.36

The way treatment is rendered is at the discretion of state and federal governing agencies. When it comes to mental health, just 18 percent of the state’s residents who struggle with severe forms of mental illness – like schizophrenia and bipolar disorder – actually receive treatment.37 Contact the Arizona Department of Health Services, the National Alliance on Mental Illness, Southern Arizona Chapter, or the Amistades, Inc. for more information on treatment options in the Tucson area.