The Drug and Alcohol Abuse Climate

Annual averages from the period of 2005-2010 pinpoint 125,000 people engaging in past-year use of an illicit drug, which accounts for 17.2 percent of the area population.2 In comparison, the rate for the entire state was 15.9 percent while the rate for all of America was just 14.7 percent.3 Spanning the entire United States, some 24.6 million people were currently using illicit drugs at the time of a 2013 survey.4 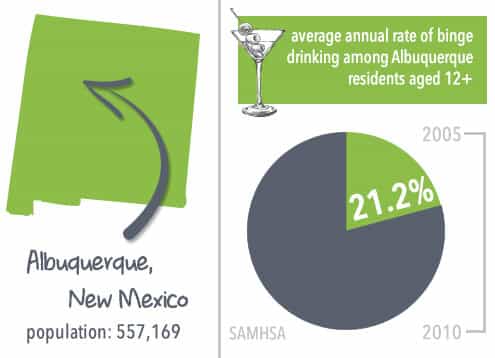 From 2005 to 2010, the average annual rate of binge drinking among Albuquerque residents aged 12 and older was 21.2 percent.5 Comparatively, Americans everywhere are binge drinking at alarming rates. On a 2013 survey of past-month alcohol consumption habits, 60.1 million people admitted to binge drinking.6

Of the 6,611 people admitted to treatment facilities in New Mexico during 2012, 2,581 reported alcohol as their only substance of abuse.7 Another 843 reported alcohol abuse in conjunction with the abuse of other substances.8 Marijuana was responsible for the most admissions among illicit drugs at 574 that year, heroin held second place at 373 admissions, and other opiates came in third with 285 admissions.9

New Mexico holds the number two spot for drug overdose deaths in the nation.10 In 2013, 23.8 per 100,000 people lost their lives to drug overdoses in the state of New Mexico, compared to 46,471 nationwide.11,12 In addition, alcohol-related deaths reached an annual average of 1,042 in New Mexico between 2006 and 2010, making the state number one in the nation for this cause of death.13 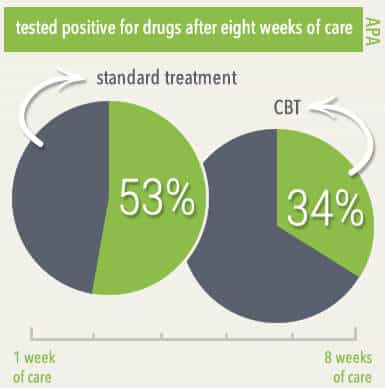 Albuquerque officials have made it their mission to decrease rates of untreated mental illness in the city. A variety of resources exist to help remedy these issues in the area, particularly for the homeless population, for which rates of mental illness and substance abuse are both notably higher. Approximately 10.3 percent of Albuquerque’s adult population suffers from one or more mental health disorders.14 Nationwide, mental illness impacts around a quarter of all adults.15

In cases of co-occurring substance abuse and mental illness, specific treatment modalities may be more beneficial to these clients. Cognitive Behavioral Therapy is an option that treats both issues of mental illness and substance abuse. This method of therapy focuses on changing the sometimes irrational feelings that can spur certain reactions. The overall goal is to eventually change or limit the reactive behavior. CBT has proven itself as an effective measure in reducing substance abuse and mental illness outcomes. A 2008 study touted impressive results, as 53 percent of individuals who received standard treatment tested positive for drugs after eight weeks of care, while only 34 percent of those who were treated with CBT modalities did.16 CBT has also shown promising results in reducing harming behaviors, anxiety, and mood issues in individuals affected by borderline personality disorder.17

Motivational Interviewing is another option. It is a collaborative approach for getting individuals to examine reasons why they engage in drug or alcohol abuse and the positive reasons they have to instigate change.

Self-medication is common among people with mental illness who just want to feel some relief and a sense of normalcy. In some cases, the very medications prescribed to treat certain mental health disorders become the substance of abuse. For instance, someone who is taking Xanax to treat panic disorder may grow dependent on the drug over time and start taking more of it than prescribed as tolerance kicks in and the usual dose isn’t as effective. With over 47 million prescriptions being filled for Xanax in 2011 alone, this is not a rare scenario.18

Prescription benzodiazepines are often abused and quite frequently in conjunction with prescription opioid pain relievers. Nationally, 89,310 people were treated in emergency rooms in 2011 for issues stemming from the use of benzodiazepines, and another 50,561 cases involved both benzos and opioid painkillers.19 Prescription opioid abuse is highest in Albuquerque out of the entire state with 8.6 per 100,000 people citing abuse of the drugs.20

Around 40 million people suffer from anxiety disorders in America.21 All of them are at risk of dependence on benzodiazepines if these drugs are used for longer than a few weeks. Untreated mental health disorders combined with substance abuse can lead to overdose and suicide. In addition to the increased risk of self-inflicted deaths, people who fail to treat their mental health symptoms spend twice as much time incarcerated.22

Ready to leave addiction behind?
Call now to speak to a consultant about your treatment options
(702) 848-6223

Both the possession and the trafficking of heroin and cocaine are felony charges in New Mexico.23,24 Individuals caught in possession of up to 8 ounces of marijuana only face misdemeanor charges, but those can still come with a year in jail and a $1,000 fine.25 If you have more than that amount, sentences increase to 1.5 years and $5,000.26 Manufacturing and selling marijuana in the state imposes even heftier sentences of up to 18 years in prison and $15,000 in fines.27
There is hope that the drug-related overdose death trend is declining in the state. In 2011, 25.9 per 100,000 people died from drug-related overdoses in New Mexico.28 A year later, that figure dropped to 24.2 per 100,000.29 In addition, 20.4 per 100,000 people die as a result of suicide in New Mexico every year.30

The Outlook on Treatment

Several treatment options in the city manage substance abuse disorders — 19 to be exact.31 Likewise, 11 of these facilities cater to the needs of the 94,000 of New Mexico residents who suffer from mental illness.32,33 New Mexico has a strong understanding of how mental health disorders impact a person’s life. There is acceptance for this group of people and a reasonable outlook on the confounding factors that stem from living with mental illness, like not being able to hold down a job or turning to drugs and alcohol to try and cope with symptoms.

Paying for treatment can be hard for many individuals. Those afflicted with substance abuse and addiction problems often don’t have steady income. Private insurance was actually only accepted at 65 percent of treatment facilities in operation as of 2012.34 Medicaid was accepted at 58 percent of these facilities, which makes it a vital aid for many who are living on low incomes or who cannot work.35 That same year, 62 percent of treatment units in the country reported the use of sliding scale programs to accommodate their clients’ financial needs.36 These programs allow clients to submit proof of income and thereby base their treatment costs off what they can actually afford to pay.

Fortunately, there are guidelines that govern who can render treatment to individuals suffering from substance abuse or mental illness. All counseling licenses in the state require a master’s level education or higher, in addition to examinations, 3,000 hours of supervised work experience, and payment of licensing fees.37 More information can be found at these sources: