Written by: Amanda Lautieri
Reviewed by: Ryan Kelley, NREMT
Updated: Dec 27, 2022
Fentanyl has fast become a huge national concern, making headlines in recent years for its increased role in the nation’s overdose epidemic.1,2 If you’re struggling with fentanyl abuse or addiction, we can help. Call us for immediate, confidential assistance at .

Did you know most health insurance plans cover addiction treatment?
About Fentanyl

Fentanyl is an extremely strong synthetic (made in a lab) opioid. Fentanyl, which was created as a prescription medication, is also made and sold illegally.3 Illicitly manufactured fentanyl, or IMF, is increasingly being used as cheap filler or added to other illicit drugs and counterfeit pills and has played a major role in the country’s opioid overdose epidemic.2

What Is Prescription Fentanyl Used For? 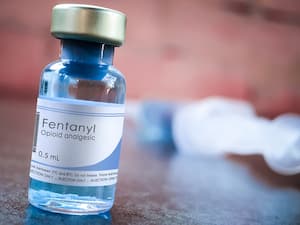 Prescription fentanyl is mainly utilized for the management of severe pain, such as pain associated with surgical procedures, or for chronic pain in patients who have become tolerant to alternative opioid painkillers.5

Fentanyl is sold and prescribed in several forms (e.g., lozenges, patches or injections) and under many brand names such as:6

As a very powerful prescription opioid, fentanyl does have a high potential for misuse, which can mean:7

Prescription fentanyl may be diverted for illicit use by those seeking it for its euphoric effects, but the major growing problem in the U.S. is fentanyl and fentanyl analogues (chemicals that are structurally similar to fentanyl and have similar effects) that are manufactured illegally and then added to other street drugs such as heroin, meth, cocaine, or MDMA to increase their potency. Illicitly manufactured fentanyl is also increasingly being found in counterfeit pills sold on the streets, such as counterfeit Xanax, OxyContin, and Adderall. Drug users with little to no tolerance for fentanyl who unknowingly use fentanyl-laced substances can easily overdose and die.5

Beginning in 2013, the U.S. began to see a steep rise in overdose deaths involving both prescription and illicitly manufactured fentanyl, a trend which unfortunately is not letting up. Drug overdoses in the U.S. rose by 30% between 2019 and 2020, with officials reporting that fentanyl played a significant role in the increase.1 Of the nearly 70,000 opioid overdoses in 2020, approximately 57,000 involved synthetic opioids such as fentanyl.1

Risks of Fentanyl Use

Fentanyl has some significant health risks, whether taken a prescription or used illegally. Appropriate prescription use monitored by a medical professional will mitigate many of the inherent dangers of fentanyl; however, any misuse of either prescription or illicit fentanyl introduces numerous health risks, including opioid dependency, addiction, and overdose.5

Immediate Health Effects of Fentanyl Use 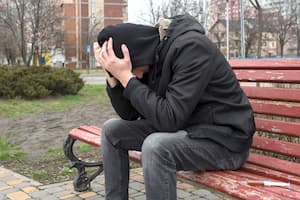 Like other opioids, fentanyl binds to the body’s opioid receptors to produce pain relief, relaxation, and euphoria.5 The less-desirable side effects of fentanyl are also similar to other prescription and illicit opioids and include:3, 5

An overdose occurs when a person takes more of a drug than their body can tolerate. Unfortunately, it can take very little fentanyl to cause an overdose. Fentanyl-laced drugs may contain far more fentanyl than would be deadly for the average person. For example, just 2mg of fentanyl can cause a fatal overdose in many people, and the DEA has found more than twice this amount in counterfeit prescription opioid pills.8

Fentanyl can have a synergistic effect with other opioids including heroin, which means a person who takes prescription opioids or who is addicted to heroin has an increased risk of overdose when combining with fentanyl (knowingly or unknowingly).9

Someone exhibiting these or other signs of fentanyl overdose needs immediate medical attention.11 If you suspect someone has overdosed, call 911 immediately and wait with the person until responders arrive.11 If you have naloxone (Narcan or Kloxxado) available, administer a dose.11 Because fentanyl is so potent, additional doses of naloxone may be needed.12 If the person does not resume breathing in 3-5 minutes, administer a second dose.13

Place the person in the recovery position with their top leg and arm crossed over their body to prevent choking should they vomit.11 Do not leave the person alone, even if you’ve been using drugs too. Many states, including Nevada, have Good Samaritan laws that protect you from arrest for drug use if you’re helping someone in an overdose emergency.14

NOTE: It’s extremely important that if you witness an overdose, you call 911, even if administer naloxone. While naloxone will reverse overdose effects for 30-90 minutes, fentanyl will stay in the body for longer and the person may re-experience the effects of overdose if they don’t get medical help.12

Long-term use of opioids including fentanyl can lead to numerous health problems that include:15

One of the most serious risks of fentanyl use is the risk of opioid addiction, a chronic and progressive disease with devastating consequences.5,15 A person who struggles with an addiction to opioids will prioritize the seeking out and using of fentanyl and other opioids, even when doing so harms their health, their relationships, their finances, or other key areas of their life.5

Someone who uses fentanyl long-term may also be dependent on the drug. Dependence is a physiological adaption that is common in those who are addicted but that can occur independent of addiction, as well.16  Dependence to fentanyl can make quitting extremely difficult, as very uncomfortable withdrawal symptoms will arise upon any attempt to significantly cut back on use. Fentanyl withdrawal symptoms include:5

What Are the Signs of Fentanyl Abuse?

Someone prescribed fentanyl or other opioids may begin to misuse them. Signs of prescription opioid misuse include:17

Someone who has lost control of their fentanyl use may exhibit the signs of an opioid use disorder, which include:18

All of these are representative of a compulsion to use opioids despite the resulting harm. Without treatment, consequences of this compulsive may continue to grow in severity. Fortunately, treatment for opioid use disorder is effective, and it has helped many people recover from addiction.18

The idea of treatment can be daunting when you’re starting to think about recovery from opioid addiction. But it doesn’t have to be. Here’s what you need to know.

First, the process for opioid addiction treatment often begins with medical detox. This is because withdrawal symptoms from opioids such as fentanyl can be very intense and uncomfortable. In some cases, symptoms such as severe electrolyte imbalances or dehydration may need the immediate attention of doctors and nurses.19

In medical detox, you can receive medications to alleviate your withdrawal symptoms and help prevent any medical complications.19 Medical detox can be performed in both inpatient and outpatient environments. At Desert Hope, we offer inpatient medical detox and around-the-clock medical support. 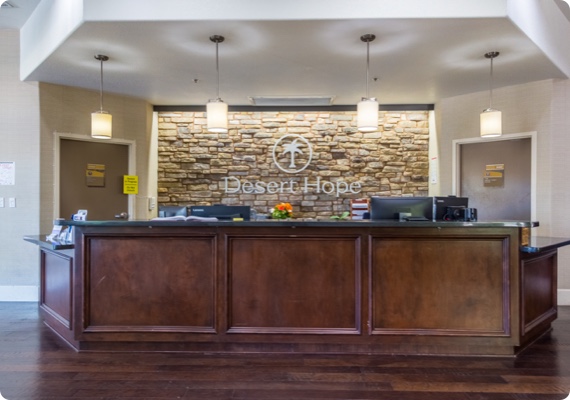 After detox, treatment should continue with a shift in focus from your physical dependence on opioids to the psychological issues that underlie your addiction. Therapy in both individual and group settings can help you uncover and learn new coping skills to deal with past traumas, negative feelings like guilt and shame, ambivalence about recovery, and any other issues that keep you using fentanyl.20,21

Medications may also be a part of your treatment.22 When combined with therapy, medications such as methadone or buprenorphine, can bolster your recovery. Both drugs are effective in retaining people in treatment longer, reducing the risk of opioid overdose, and helping to enable patients to live self-directed lives no longer controlled by opioids.22

Treatment after detox may be inpatient or outpatient, depending on your needs and how much support you have for your recovery at home. Your doctor or treatment team can help you determine which type of program is right for you.

Inpatient programs in Vegas offer a live-in recovery environment with a great deal of support and structure. The lifestyle of active addiction is often a chaotic one, and the structure of this type of program can be hugely beneficial in removing the chaos and creating a supportive environment conducive to introducing healthy habits needed for long-term sobriety.

At Desert Hope, we offer every treatment option from medical detox to inpatient rehab to outpatient treatment. We can talk you through your recovery options when you call us at . We can also help you instantly check your insurance benefits with our quick online benefits check.

Your Next StepsRecovery is possible. We're here to help with your addiction.