Written by: Amanda Lautieri
Reviewed by: Ryan Kelley, NREMT
Last updated on February 15, 2021
Alcoholism, clinically referred to as alcohol use disorder (AUD), is a common, chronic, and sometimes-progressive medical condition that entails compulsive drinking of alcohol. For many people, having a beer, a glass of wine, or a cocktail can be an enjoyable part of a meal, occasional social gatherings or celebrations. For others, drinking in moderation may be more difficult and they may find themselves unable to control their alcohol use. Here we’ll provide an overview of alcohol use in the U.S., define excessive or problematic drinking, review the potential risks of alcohol misuse, and explore your treatment options if you’re struggling with alcoholism or problematic alcohol use. 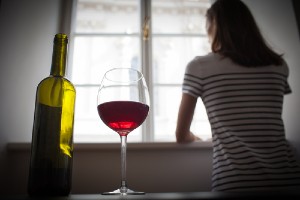 Alcohol use is common in America. In 2018, more than 2/3 of all adults reported drinking alcohol in the past year.1 And it’s not just adults; more than half of all high school seniors surveyed in the 2020 Monitoring the Future survey admitted to past-year drinking.2

While many Americans drink responsibly, excessive drinking results in an estimated 95,000 deaths in the U.S. every year. Excessive drinking includes both heavy drinking and binge drinking, as well as any drinking by a pregnant woman or person under the legal drinking age of 21.3

Binge drinking is defined as 4 drinks per occasion or more for women and 5 or more for men. The CDC reports that:3

Drinking to excess can be harmful, not only to your physical health but also to your mental health. Binge drinking and heavy alcohol use can increase an individual’s risk to developing an alcohol use disorder, commonly called alcoholism.

Alcohol’s effects on the brain are similar to other drugs of abuse, and for some people alcohol use can become compulsive.4,5 Someone with an AUD will not be able to stop drinking even when their alcohol use is causing harm to their health or to other areas of their life, such as their relationships, job, or social life. Someone with an AUD might also be dependent on alcohol, needing to drink to avoid withdrawal.5 Alcohol dependence adds another layer of difficulty to getting sober.6

An AUD is not defined by binge drinking episodes, drinking what seems like a lot on a regular basis, or even drinking to excess too often, though these of course may be signs of an alcohol addiction.

There are very specific criteria that doctors and mental health professionals use to diagnose an alcohol use disorder. Meeting 2 of the following 11 criteria is indicative of an AUD:7

The more criteria a person meets, the more severe the alcohol use disorder.7

What Are the Long-Term Effects of Alcohol Abuse? 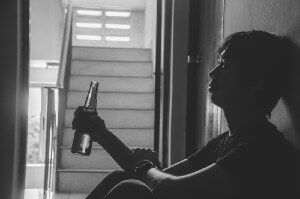 The immediate dangers of intoxication—such as the risk of accidents and injuries, as well as blackouts and alcohol poisoning—are well-known. However, excessive alcohol use over time can lead to the development of chronic illness and many other serious physical and mental health problems. Some of these include:7,8

Chronic excessive alcohol use may also result in a very serious, although rare, brain disorder called Wernicke’s encephalopathy, which arises from a deficiency of Vitamin B1 (thiamine). Symptoms include:9

Wernicke’s encephalopathy often develops into a more long-lasting condition called Korsakoff’s syndrome, symptoms of which include:9

Wernicke’s encephalopathy and Korsakoff’s syndrome occur together so often that they are believed by many to be two phases of one syndrome (Wernicke-Korsakoff syndrome), with the first being the acute phase and the second being the chronic phase.9

Signs and Symptoms of Alcohol Withdrawal

For a person who regularly drinks heavily, quitting isn’t as simple as saying no to alcohol. Sometimes, it can actually be dangerous. The alcohol withdrawal syndrome has a broad range of symptoms from mild to severe. For most people, alcohol withdrawal will be uncomfortable and may prompt serious urges to relapse in order to feel better. For others, alcohol withdrawal symptoms can be dramatic and severe, even dangerous and life-threatening.6

Alcohol withdrawal may bring about symptoms such as:5

Delirium tremens is the most severe form of alcohol withdrawal, manifested by rapid and severe changes to a person’s mental status and nervous system. Symptoms may include tremors, agitation, hallucinations, seizures, delirium (severe confusion), rapid mood changes, and sensitivity to light, touch, and sound.10 DTs is extremely rare in the general population <1% but seen in up to 2% of people diagnosed with alcohol dependence. The mortality rate from DT is about 5% and lower when recognized and treated early on.11 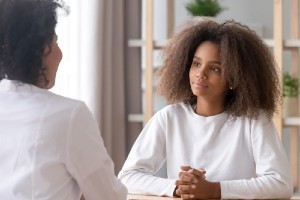 While there is no single “cure” for alcohol addiction, people struggling with alcohol misuse or undiagnosed alcohol use disorder can achieve and maintain long-term recovery. However, they may need help to do it. For many people, treatment in some form or another is effective in significantly reducing or promoting complete abstinence from alcohol. Alcohol addiction can be managed with evidence-based treatment approaches that include behavioral and pharmacological therapies.12

Alcohol treatment comes in many forms, and often people will engage with more than one type. Treatment for alcoholism may include:

Not every person’s treatment path will look the same, nor should it.6 At Desert Hope, we individualize your recovery plan to your specific needs. We’re here to help you determine what is right for you or your loved one when you call us at .

Find your community at Desert Hope. Learn the skills you need to get and stay sober while making friendships that will last a lifetime. Give us a call to get started today.