Recognizing The Signs and Symptoms of Drug Abuse

Drug abuse, simply put, is the ongoing overuse of a substance or use of an illicit substance to get a reward reaction in the brain or body, which can result in harm to health, relationships, and responsibilities. Drug abuse can range from excessive use of prescription painkillers to taking cough medicine as a hallucinogen to using cocaine.

Drug abuse can lead to drug addiction, but it can also be a danger in its own right. Understanding patterns of drug abuse can help people avoid the issues that may arise with dependence and potential overdose on drugs and alcohol.

What Is Drug Abuse?

While the difference between drug abuse and drug addiction or dependence is drawn on a fine line, abuse is different from dependence in that a person can choose to overuse drugs without developing a physical need to take the drugs. However, these definitions are often conflated. The National Institute on Drug Abuse defines addiction as any drug-seeking behavior that continues despite negative consequences. This can occur whether or not physical dependence has occurred, and it is sometimes a part of drug abuse as well as dependence.

As an example, alcohol abuse is defined by the Centers for Disease Control and Prevention as using alcohol in ways that can damage health, relationships, or responsibilities. In contrast, alcoholism is the physical dependence on the substance that causes extreme cravings and the inability to control drinking.

Drug abuse can lead to drug addiction. If a substance is misused for a long enough period of time, the body can develop a tolerance to the substance, requiring a person to take a larger dose to achieve the same results that a smaller dose achieved previously. This leads to cravings for the drug, which indicate that the body has formed a dependence on the substance.

In other words, abuse is based more on the behaviors around substance use, and addiction is about a physical, chemical dependence on the substance. Drug addiction, therefore, is a type of drug abuse under this definition; this is demonstrated by the fact that the most recent version of the Diagnostic and Statistical Manual of Mental Disorders (DSM-5) has defined both drug abuse and drug dependence or addiction as “substance abuse disorders.”

A number of factors may contribute to a person’s abuse of drugs or alcohol. Some of these factors are related to the person’s physical attributes, some to mental wellbeing, and some to environmental influences. These factors can include:

Any of these influences can factor into risky substance use behaviors. In addition, people who might not otherwise have a drug abuse problem might develop one based on use of certain prescription drugs over a long period of time, which can contribute to chemical dependence in the brain, leading to abuse and dependence.

Most Common Substances of Abuse

There are numerous substances that are commonly abused. Along with illicit drugs, these substances range from prescription drugs like painkillers and anti-anxiety medications to commonly found substances like cough syrup, alcohol, and tobacco. 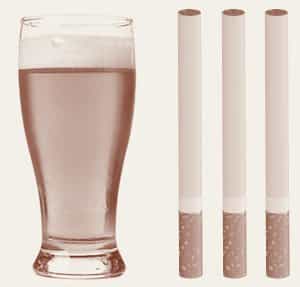 Alcohol and nicotine are substances found in legal products that are highly addictive, and they are some of the most commonly abused substances. The challenge is that smoking and drinking are generally considered to be socially acceptable pastimes, and many people take part in these activities without suffering from addiction. However, abuse of both substances is common and can lead to health issues, psychological changes, and social consequences.

Alcohol is found in many types of beverages, including beer, wine, liqueurs, and spirits. Alcohol abuse consists of excessive drinking on a single occasion, termed binge drinking, or chronic heavy drinking. Binge drinking does not necessarily lead to addiction, but a recent study demonstrates that the enzymes produced by the body during a bout of binge drinking can contribute to cravings that, over time, can lead to addiction.

Nicotine is a chemical found in tobacco that is highly addictive; it works on the body’s chemistry in ways that are similar to how opiates and cocaine work. Abuse of tobacco through smoking, chewing, and sniffing tobacco products can quickly change brain chemistry and lead to addiction.

The other common substances of abuse are illicit drugs. These drugs are illegal to possess and use due to their highly addictive nature and high risk for harm.

A large number of illicit drugs exist, and more are being created all the time, such as bath salts, flakka, and Spice or K2, which is a synthetic drug similar to marijuana. New trends in drug abuse seem to rise on a regular basis, with new opportunities for the adverse effects of abuse and the potential for dependence.

Drug abuse can lead to addiction or dependence on substances. Dependence on drugs can result in major issues for the person abusing the drug, including problems with physical and mental health and various psychosocial issues. If several of these issues are seen in an individual, it could be a sign of a substance abuse disorder.

The health risks of drug abuse vary widely depending on the substance being abused. Minor issues can be exacerbated with continued abuse and become major disease issues. With certain substances, overdose can cause the most severe physical risks, including death. Other heath risks include:

Drug abuse can have an adverse effect on social life and daily responsibilities. Signs of this include:

Length Of Stay in System 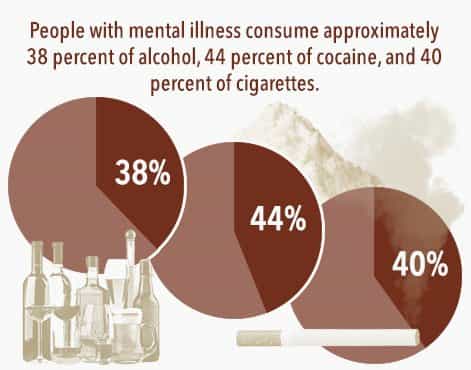 Because mental illness can be both a contributor to and a result of drug abuse, it is important to be able to provide treatment for all co-occurring conditions. Treating both the psychological issues that led to the abuse and the issue of the abuse itself is more likely to result in a positive outcome when it comes to long-term recovery.

Any substance use disorder can be treated with detox and rehabilitation. Because addiction is considered a chronic condition, and because the chance for relapse is high, treatment is part of a continuous plan to maintain recovery from drug abuse. For this reason, most professionals recommend that treatment for drug abuse and addiction be undertaken via long-term, residential treatment in a specialized rehab facility.

In these types of facilities, treatments that can be expected include: 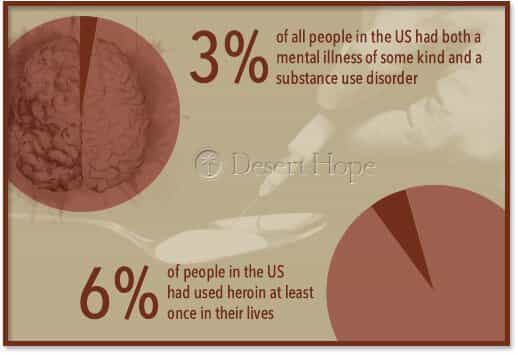 What is drug abuse?

Drug abuse is use of a substance to obtain a reward response, even at the risk of health, relationships, or responsibilities. Whether it involves legal substances, improper use of prescription or over-the-counter medicines, or illicit drugs, drug abuse ends up creating more risks than the reward of the “high” is worth. The risks created by drug abuse include:

Is drug abuse different from addiction?

Drug abuse is different from addiction in that it is both separate from and a symptom of addiction. Drug abuse is a behavioral pattern, while addiction is a physical and psychological disorder.

Patterns of drug abuse can result in chemical changes in the body that lead to dependence and addiction. The physical cravings for more drugs and the psychological inability to stop taking the drugs lead to further drug abuse.

A person who is addicted to drugs can learn to control the temptation to continue abusing drugs with proper treatment. The cycle of addiction can be broken, and drug abuse can be stopped, through medical support and therapy to manage the issues that underlie the drug abuse.

How does abuse start?

There are many contributing factors to drug abuse. These factors can be physical, psychological, or environmental in nature. Some of these factors include:

Addiction is considered to be a developmental disease that often begins in childhood, either as a response to challenging family or environmental circumstances or trauma, or through peer pressure or early exposure to the substance (use then continues into adulthood).

Some scientists believe that genetics may account for between 40 and 60 percent of a person’s potential to have a substance abuse disorder. However, as scientists learn more, there is evidence that this is more complex than the commonly held idea of an “addictive personality.”

Early childhood experiences may actually be able to change the way genes behave and contribute to addiction. In addition, drug abuse is more common in people with co-occurring mental health disorders, which indicates that more than just genetics is involved.

The action of addictive drugs in the body results in direct chemical changes to the brain that can lead to dependence on those drugs. This means that drug abuse can lead directly to addiction. This is seen in drugs like benzos that are not necessarily addictive if used for short periods of time, but that over long periods cause changes in the brain that result in the body becoming dependent where it hadn’t been before.

That said, children of alcoholics are 3-5 times more likely to become alcoholics themselves, regardless of whether or not they are raised by their birth parents. This indicates that whatever the other contributors may be, genetics does play a large role.

What are the most common drugs of abuse?

The most common drugs of abuse include a range of depressants, stimulants, and hallucinogens. These include the following:

Some of these drugs are abused intentionally, while others may be prescription drugs that are used for too long or used contrary to doctors’ instructions, leading to the chemical changes described above. These changes can then lead to dependence and further abuse.

Detox depends on the drug being used, the physical attributes and health of the person who used it, the amount of time it was used, and the dosage and frequency of use.

Detox can be an uncomfortable process, resulting in a variety of symptoms. These can include:

These symptoms can range from mild to severe depending on the factors above. Some symptoms can be more dangerous; during withdrawal from alcohol or benzos, withdrawal can result in seizures, fever, psychotic episodes, and, in the case of alcohol, delirium tremens. Some of these symptoms are potentially fatal.

Going through a professional, medically supported detox process can help to minimize many of these symptoms and keep individuals safe. A research-based, residential treatment program is the best place in which to receive this type of detox. Medical detox, followed by comprehensive addiction treatment, is recommended by experts as the method most likely to help a person reach and maintain recovery from drug abuse and addiction.

What are treatment options for drug abuse?

There are a variety of treatment options available to help a person detox and recover from drug abuse and addiction. It’s important to verify the validity of a program prior to committing to it. Programs that promise rapid detox, instant recovery, and a “cure” for addiction are promising impossibilities and unsafe practices. While rapid detox sounds great, it carries a range of health risks and there is no evidence to show that it reduces withdrawal timelines at all.

Experts generally agree that research-based, residential treatment programs provide the greatest likelihood of long-term recovery and abstinence from drug abuse. These programs provide treatments that make it possible to not only detox from drugs and alcohol, but also learn to manage cravings or triggers that could potentially lead to relapse. Comprehensive drug abuse treatment programs give clients the support mechanisms and tools they need to resist relapse and live safely and happily in recovery.