Can You Overdose on Kratom?

Kratom refers to the leaves of a tree that grows in the tropics of Southeast Asia.

This unique plant, related to the coffee plant, is used to treat pain and behaves similarly to morphine. Recently, it’s come to be used recreationally in the US and other Western nations. Because its presence is so new, there are not yet any federal restrictions on the use of kratom, though the Drug Enforcement Administration and the Food and Drug Administration have issued warnings on the intoxicating effects of the substance as well as possible dangerous side effects. 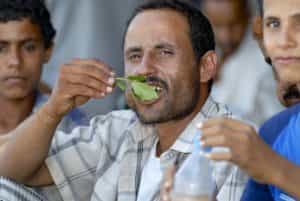 Despite acting like an opioid, kratom can have both stimulant and psychoactive effects. It’s typically ingested by chewing the leaves, brewing them in a tea, smoking them, or taking them in capsule form. According to the Centers for Disease Control and Prevention, kratom use has been increasing steadily in recent years, as have calls to poison control centers about the substance. From 2010 to 2015, there were 660 calls about the substance, with 7 percent of those poisonings resulting in life-threatening conditions.

Like with most drugs, overdose on kratom is possible, especially when mixed with other intoxicants. However, the effects of a kratom overdose haven’t yet undergone much official study due to the fact that it’s so new in this part of the world. Most of the information available is based on case reports, but the findings in these reports suggest the possibility for severe and dangerous effects from taking too much of this mysterious drug.

Possible signs of a kratom overdose include:

These symptoms can be dangerous, and that danger is compounded by the fact that there’s not yet much information on what dose is appropriate. It’s highly recommended to start out small, taking just a few grams at first to figure out how much your body can handle. What is known is that kratom produces stimulant effects at smaller doses, but as the dose is raised, it can produce strong sedative and euphoric effects. At even higher doses, it can produce hallucinations and delusions. Beyond that, overdose is likely.

Another concern about kratom is not just that it’s addictive, but its withdrawal symptoms can be very intense in ways usually only seen with more synthetic drugs. Withdrawal happens when a person starts using a drug enough to develop a tolerance, forcing that individual to make more and more of the substance to experience the same kind of high. Once this happens, stopping intake of the drug will result in unpleasant symptoms. If a person has been a heavy user for a significant period of time, these symptoms can be nearly unbearable and, with some drugs, dangerous.

Anyone addicted to kratom should consult addiction treatment specialists before attempting to quit, as there are many available programs that can make the withdrawal process much safer and easier to handle. We’re available 24/7 to help via . Call us today to learn more about Desert Hope, our drug rehab facilities in Las Vegas.

Are There Added Risks of Mixing Alcohol or Drugs with Kratom?

Low doses of kratom induce mild stimulation, while higher doses lead to feeling sedated, much like narcotics do. In fact, kratom became popular in the US as a method to help people struggling with opioid addiction endure withdrawal symptoms on their own in an attempt to quit substance abuse. However, kratom itself is an intoxicating drug, leading to abuse; therefore, it also interacts with other intoxicating, psychoactive or even medicinal substances.

For example, at high doses, kratom is a central nervous system depressant. Mixing it with alcohol, prescription opioid painkillers, benzodiazepines, sedative-hypnotic sleep aids, barbiturates, and other CNS depressants can be dangerous. This can lead to depressed breathing, so the body does not get enough oxygen. Without oxygen, cells die, organs shut down, and the person is more likely to end up in a coma or dead.

Mixing kratom and psychoactive drugs like shrooms, LSD, or synthetic marijuana can lead to more intense hallucinations, seizures, delusions, extreme confusion, and aggression toward oneself or others. Kratom mixed with stimulants like amphetamines or cocaine can cause mood swings, heart problems, liver or kidney damage, and stomach problems.

People who take prescription medications for mood disorders may suffer serious problems if the medications are mixed with kratom. The Centers for Disease Control and Prevention (CDC) note one instance in which a person took an antipsychotic, an antidepressant, and kratom, and died from poisoning.

When kratom is used recreationally, it is most often taken to enhance the experience of other drugs. This can be extremely dangerous and cause overdose, long-term hospitalization, physical harm, or death. Physical symptoms associated with kratom and other drugs include:

Long-term use of kratom can result in physical dependence, tolerance, and addiction, just like abusing other intoxicating substances. This means that the drug can affect the body and brain, causing damage. Some of the long-term effects of kratom abuse include:

It is possible that kratom damages the thyroid. Like other opioid-like substances, it is unlikely that kratom will damage the liver, especially if it is the only substance of abuse; however, people who take kratom typically mix the drug with other substances or use it to end an addiction to a more potent narcotic like heroin. Mixing drugs increases the likelihood of liver damage, while heroin can start a pattern of liver damage, which kratom use can continue. Chronic use of kratom alone has been associated with rare cases of liver toxicity.

One study also suggests that kratom can suppress some hormones produced by the thyroid, leading to hypothyroidism. Symptoms of hypothyroidism include:

The Drug Enforcement Administration (DEA) has stated its intention to move kratom to a Schedule I substance, much like heroin, because it is not believed to have an acceptable medical use; instead, it is believed to be very addictive and damaging. This announcement was made in 2016.

herbalkratom
Prefer getting help via text?
We're available 24/7 via text message. Signup below for access to our team when its convenient for you!
and many more...
Your Next StepsRecovery is possible. We're here to help with your addiction.