While addiction is an equal-opportunity disease, there are clear divides between gender that have been analyzed and documented for decades. It’s commonly known that men are more likely to experience addiction than women, but as addiction rates rise, it’s becoming increasingly common for women to seek treatment as well.

This campaign used a combination of survey results and data to look at the gender divide in addiction in real time. We surveyed 1,500 people who have abused drugs in the past and examined data from the CDC and the National Center for Health Statistics going back 2 decades. We’ve compiled the most compelling statistics below. 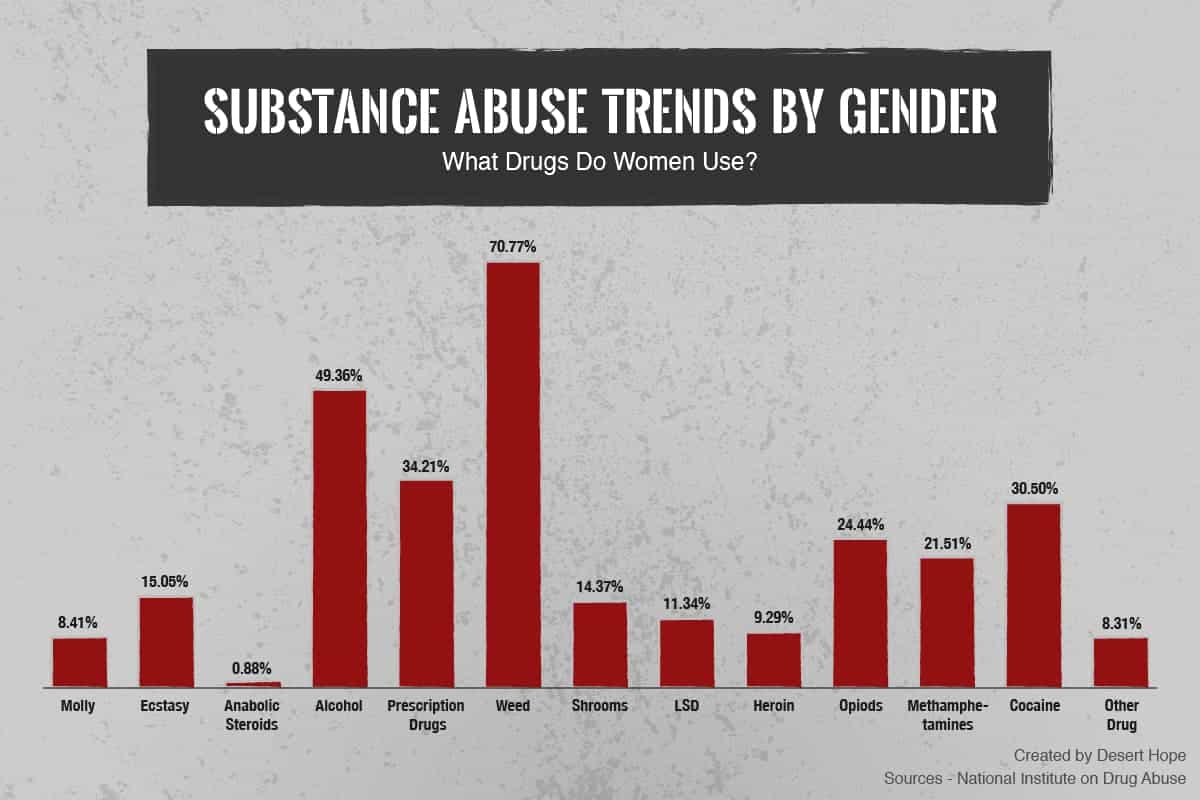 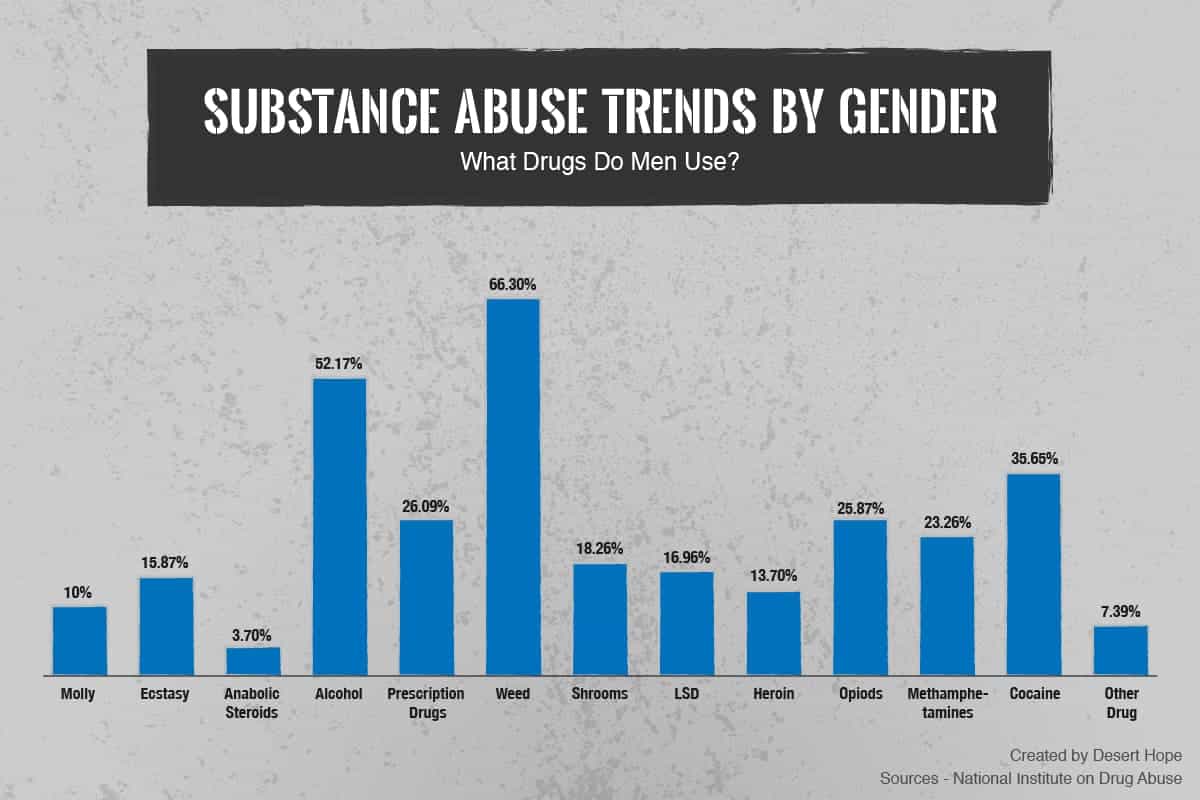 Based on survey responses, men are more likely to abuse the vast majority of illegal drugs – molly, anabolic steroids, alcohol, shrooms, LSD, heroin, methamphetamines, ecstasy, and opioids. And while the most common drug they used is marijuana, over half of the men we surveyed also admitted to abusing alcohol. 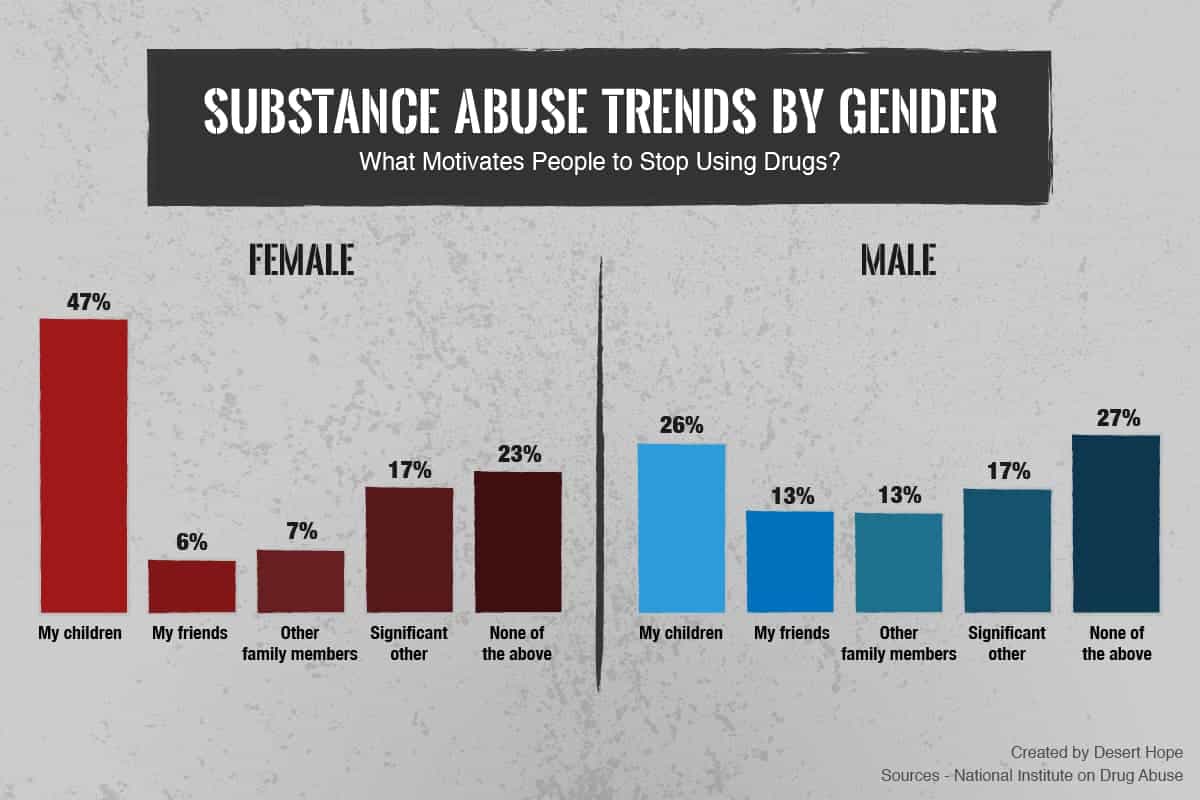 When asked what their biggest motivation to stop using drugs, respondents overwhelming named their children. The most significant demographic to respond that way, however, were women. Men were more likely to say that their children, friends, family, and significant others were not factors that encouraged them to pursue sobriety. 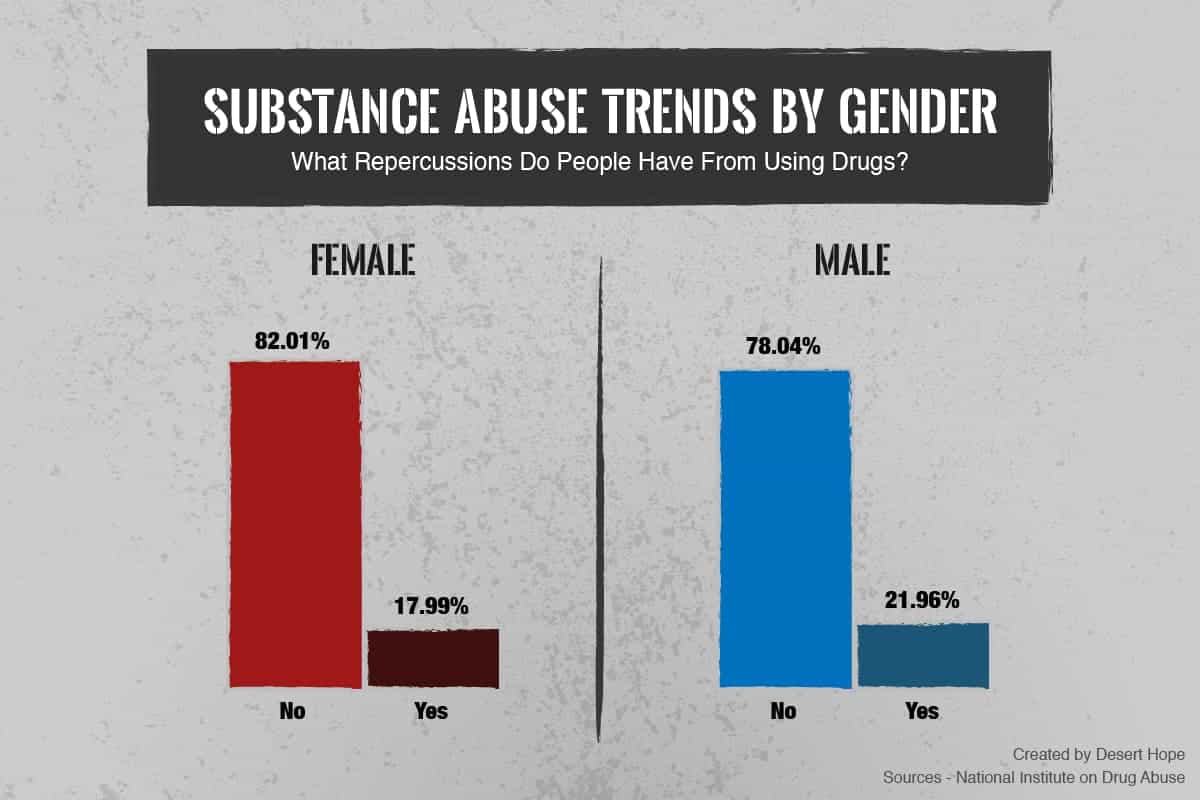 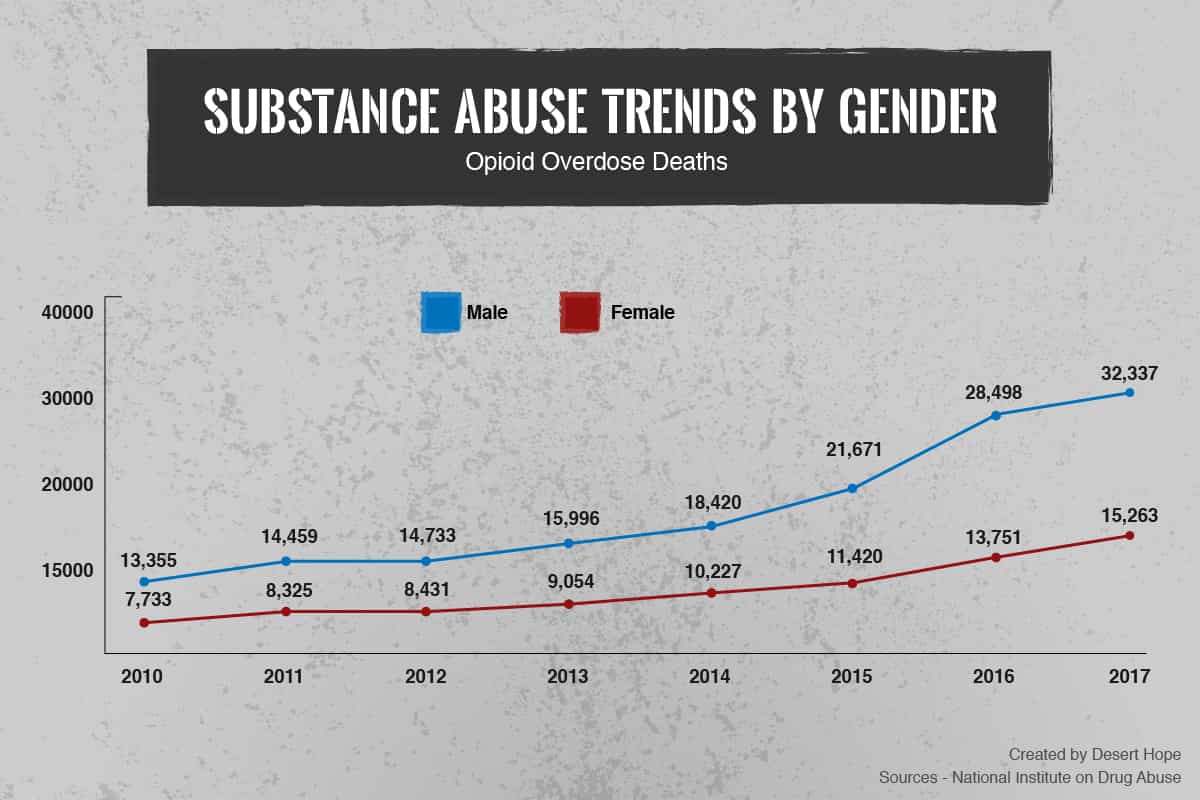 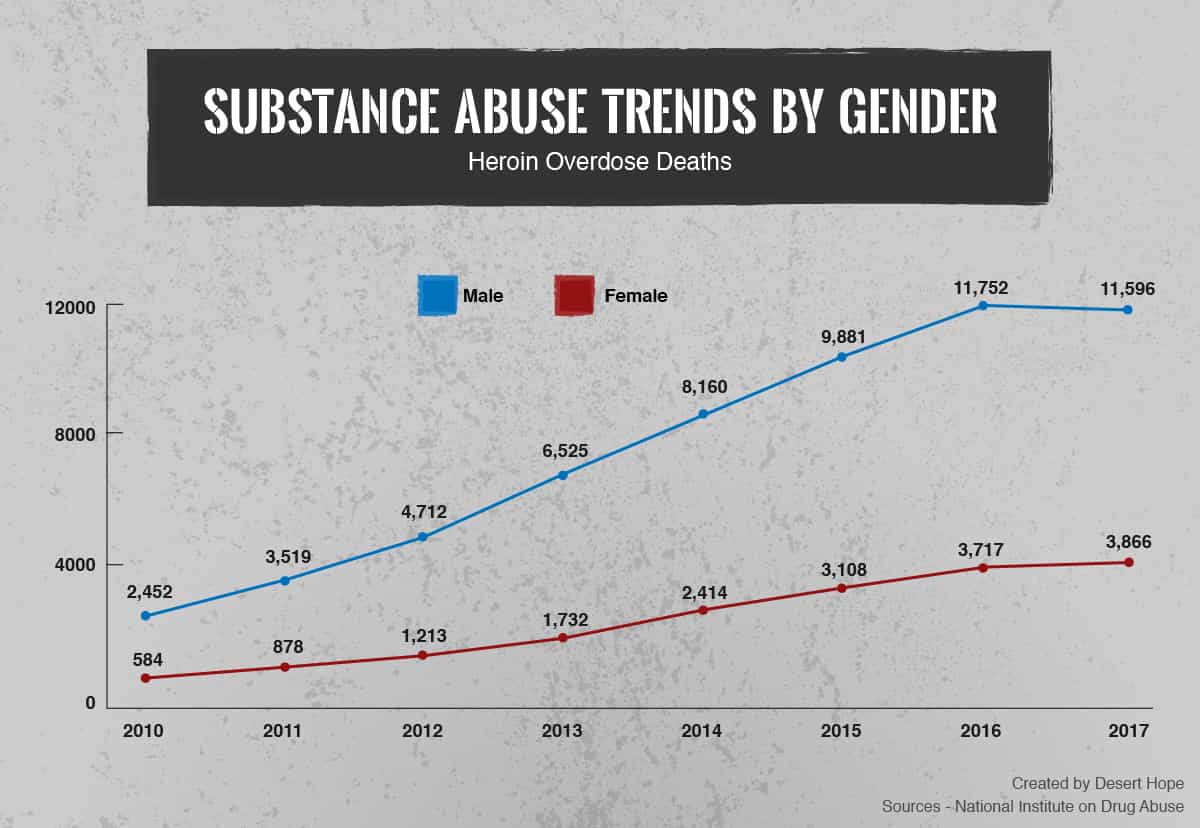 In the case of heroin, men were over 3 times as likely as women to die from an overdose. Fewer than 4,000 women lost their lives as a result of heroin abuse, while over 11,000 men died due to their heroin abuse. However, for the first time in recent years, the number of annual heroin overdoses in men decreased, which is a promising sign. 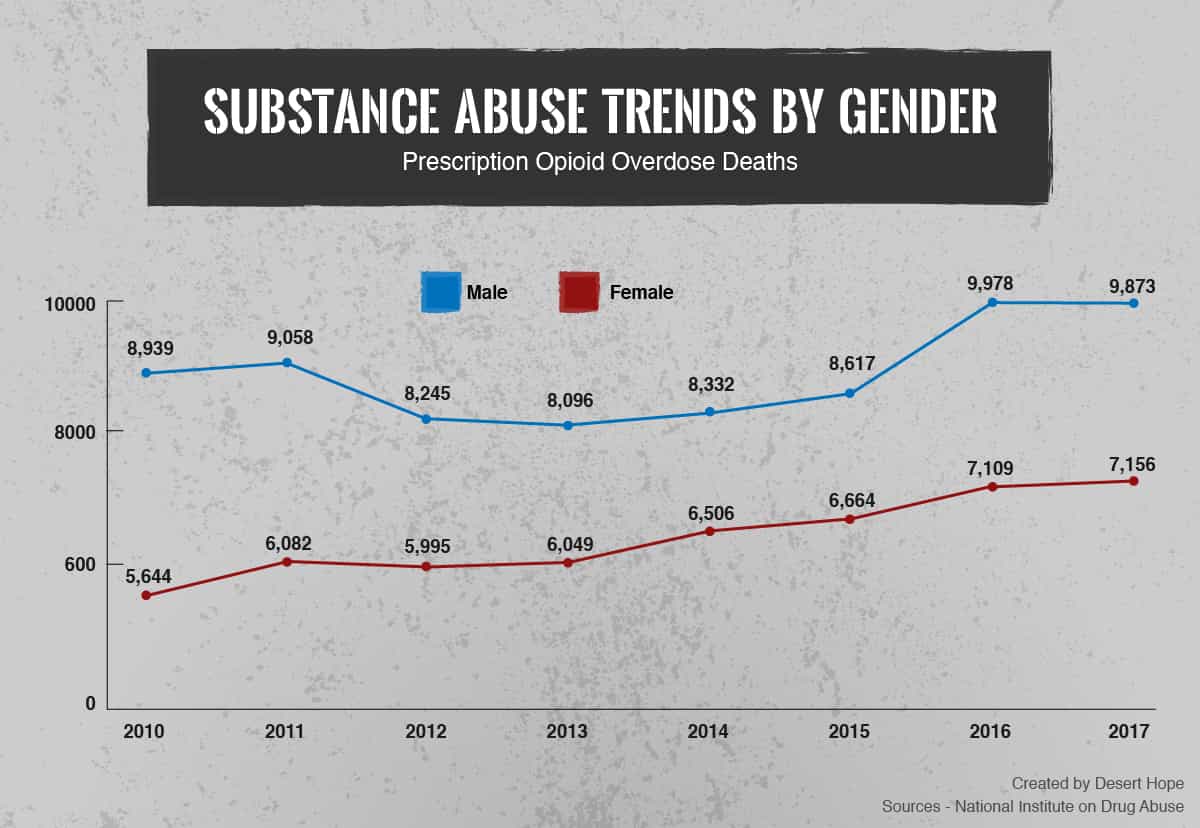 Addiction is an ongoing problem in the United States today, and the rates of overdose and substance abuse are rising every year. As this disease touches more lives, it’s important to understand how the risk affects those closest to you, including signs of addiction you can watch for. If you or your family need more information or support, visit our resource center or contact us.

statistics
Prefer getting help via text?
We're available 24/7 via text message. Signup below for access to our team when its convenient for you!
and many more...
✕
Instantly Check Your Insurance Coverage
Your information is safe & secure
At Desert Hope, we accept most types of private (non-government) insurance and offer a variety of payment options.
You can quickly and privately check your insurance benefits to see if you're covered for addiction treatment services. We’ll be able to tell you if your provider is in network with Desert Hope Treatment Center and all American Addiction Centers locations.
This means your treatment may be FREE1 depending on your policy, copay, and deductible.