Data and Statistics: The Prevalence of Mental Illness

It is also important to understand that there are many critics who find the very notion of a mental illness as a socially constructed category that has no biological foundation. There is actually some relevance to this point as the majority of psychiatric diagnoses have no formal medical tests that are designed to be used in their diagnosis. Instead, mental illness is diagnosed by behavioral observations. This has led to the notion that many normal behaviors are medicalized by organizations, such as the APA, WHO, and others. Despite these controversies, the APA’s findings and diagnostic criteria still remain the most often frequently sources for diagnosing and understanding mental illness in the United States. The figures presented in this article are taken from the APA’s current Diagnostic and Statistical Manual of Mental Disorders – Fifth Edition (DSM-5) and an associated technical companion, Kaplan and Sadock’s Synopsis of Psychiatry.

The figure that is typically stated is that about 26.2 percent of the American population experiences a diagnosable mental illness in a given year. Critics believe that this figure is abnormally inflated. Stated prevalence rates for select mental illnesses follow. 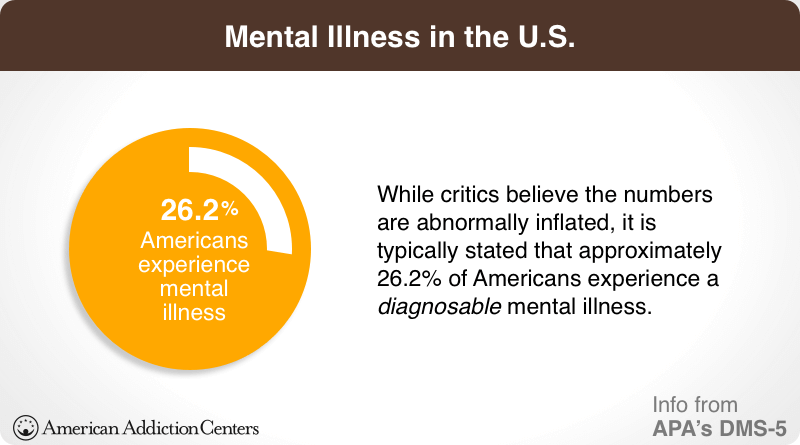 Anxiety disorders result in the dysfunctional manifestation of fear or anxiety and related behavioral disturbances. While the experience of anxiety is common in many instances, these disorders represent the dysfunctional experience of anxiety that is either out of proportion to the situation or that does not dissipate in a normal manner. The prevalence rates for the major anxiety disorder are estimated as follows:

Bipolar disorders are now in their own diagnostic category. There are several different types:

Ready to leave addiction behind?

Call now to speak to a consultant about your treatment options

Depressive disorders are disorders where depression is the major feature. There are several manifestations of these disorders. The major ones are listed here.

These disorders are often diagnosed in childhood. The familiar ones are listed here.

These are mental health disorders where there is a disruption in one’s consciousness, memory, identity, or perception.

This category represents the manifestation of the many familiar eating disorders.

This disorder is commonly referred to in other contexts as gender identity disorder. The diagnostic criteria for these disorders are markedly different for children and adults, and prevalence rates differ depending on these factors and on one’s biological gender. The prevalence rates are quite small. For adult males, the prevalence ranges between 0.005 percent and 0.014 percent, and for biological females, from 0.002 percent to 0.003 percent. Estimates for prevalence in children are not stated.

Previously, these disorders were listed as anxiety disorders, but in the DSM-5, they have their own category. The most familiar disorders are listed here.

These disorders represent the obtainment of sexual excitement through atypical means. There are number of these disorders; some the most well-known are listed here.

For the 10 personality disorders, the estimated prevalence rates are outlined below.

These are disorders related to the act of sex. The most well-known are listed here. 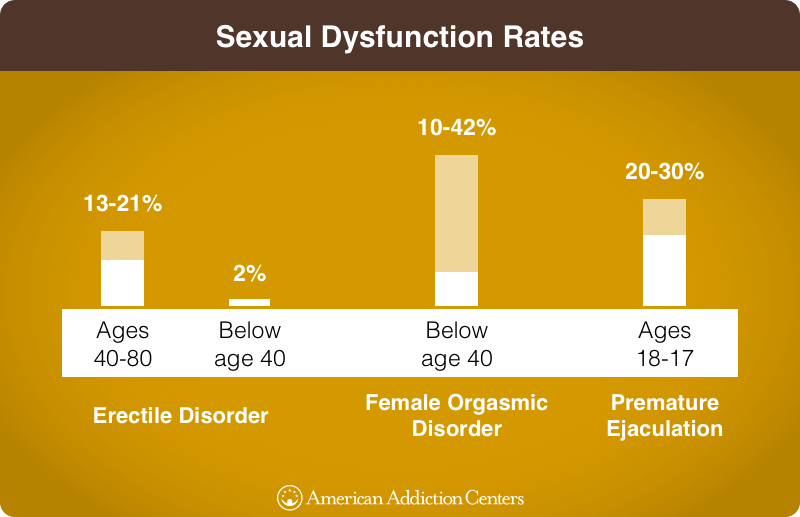 Concerned about treatment costs? Call now for a FREE insurance and payment consultation.

These are disorders of the sleep cycle. The most well-known are included here.

This group of disorders includes disorders formally categorized as meditation disorders. The better known of these disorders are listed here.

These are categorized by type.

This is a new category that includes a number of disorders that result from the experience of real or perceived trauma or stress. The major disorders in this category follow. 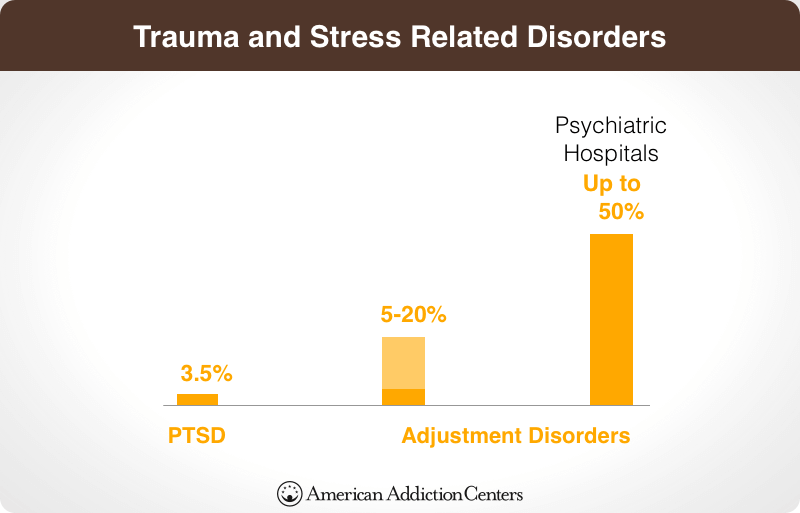 statistics
Ready to get started?
We're available 24/7 to answer questions and help you make decisions about starting recovery from drug use.
Your Next StepsDon't gamble on your addiction.