Attention deficit hyperactivity disorder (ADHD) is actually a heterogeneous set of disorders that are typically first noticed and diagnosed in children; however, new diagnostic criteria put forth by the American Psychiatric Association in 2013 allows for a diagnosis of ADHD in adults age 17 and over without a specific documented history of the symptoms in childhood.

This article will briefly discuss the symptoms of ADHD, the various types of ADHD, how ADHD is related to substance abuse, and how treatment for individuals diagnosed with both ADHD and substance abuse is often approached.

ADHD is a clinical neurodevelopmental disorder that is most often identified in children or adolescents. The formal diagnosis of ADHD for children requires them to display six or more of nine problems associated with attentional difficulties and/or six or more of nine symptoms with hyperactivity and impulsivity.

As one can see from the abbreviated list of the type of symptoms that are noted in people diagnosed with ADHD, these are behaviors that many people occasionally experience or at least occasionally engage in. In children, many of these behaviors are to be expected given their level of development. The difference between a behavioral symptom of a mental health disorder and normal behavior represents a difference in both quantitative and qualitative aspects of the behavior.

This is why a professional assessment is crucial to determining if a child or adult has a formal disorder of attention such as ADHD.

ADHD Is a Heterogeneous Disorder

When it is explained that ADHD is a heterogeneous disorder, this means that the disorder often presents quite differently in individuals who are given an ADHD diagnosis. Just saying that someone has ADHD does not communicate a whole lot about the person’s actual symptom presentation and any resulting difficulties that may be present.

In order to understand each case on an independent level, more information is needed. As a result, the American Psychiatric Association has further separated the disorder into three different presentations of ADHD that represent different manifestations of the disorder. These include:

Clinicians can also formally ascertain whether or not the presentation of the disorder is mild, moderate, or severe. In order to be diagnosed with ADHD, the symptoms cannot be better explained by another mental health disorder, the use of medication or drugs, or some other medical condition, such as a head injury or other condition.

There are also other diagnostic categories that allow for a tentative diagnosis of ADHD when someone does not meet the specific diagnostic criteria for the disorder, but is still presenting with some of the symptoms of the disorder and experiencing difficulty as a result of those symptoms.

In summary, the research shows that: 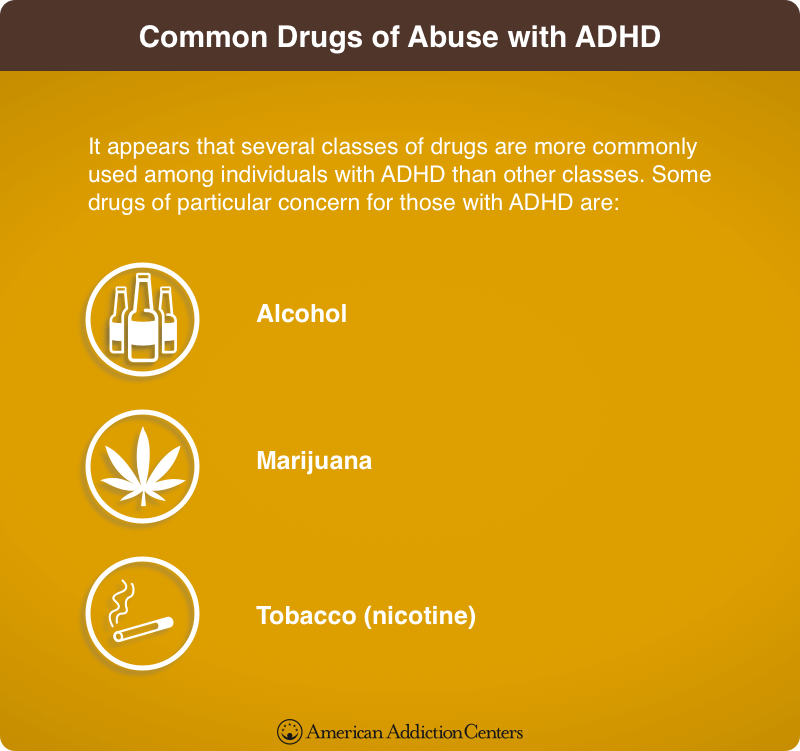 Of course, individuals with comorbid ADHD and some other psychological disorder are potentially at a higher risk for the development of any type of substance use disorder. Since using alcohol and marijuana would produce effects that would counteract hyperactivity and inattention in people with ADHD, this may be at least partially why individuals with ADHD commonly abuse these drugs. Nicotine may produce calming effects as well, but the mechanism that makes nicotine a susceptible drug of abuse for individuals with ADHD is not fully understood.

Treatment for ADHD in children typically involves some form of medication management combined with a behavioral management program. Common medications used in the treatment of ADHD include stimulant medications like Ritalin and Adderall: The manner in which these medications work seems contradictory – using a stimulant to treat hyperactivity. However, it is hypothesized that the issue with children diagnosed with ADHD is that their systems run more slowly than normal, and that hyperactivity and inattention (needing to quickly focus one’s attention back and forth) are results of the person trying to compensate. When given the stimulant medication, the person no longer needs to compensate and is able to pay attention and settle down.

Other medications, such as antidepressants, can be used to treat symptoms associated with ADHD, but typically are not first line treatments for ADHD.

There is no indication that being on medication such as Ritalin for the treatment of ADHD increases the risk that an individual will develop a substance abuse issue.

Behavioral modification for ADHD involves reinforcing limits to behavior, strictly enforcing rules and regulations, setting up a contingency system of rewards and punishments for appropriate and inappropriate behavior, and so forth.

Finally, it is important to briefly mention some issues that have stirred some controversy regarding this diagnosis.  First, the American Psychiatric Association clearly states that ADHD occurs in most cultures in about 5 percent of children and 2.5 percent of adults; however, it is clear that in the United States, diagnostic rates of ADHD in schools are significantly higher and appear to range anywhere between 9 and 15 percent, with males diagnosed significantly more often than females. These findings have questioned the legitimacy of the process of diagnosing ADHD.

Secondly, child psychiatrist Leon Eisenberg who was important in the conceptualization of many developmental disorders, including ADHD, reportedly admitted shortly before his death that ADHD was a fictitious disease.  This story received quite a bit of press. There have been a number of other articles and books written by psychologists, psychiatrists, and others claiming that ADHD is not a valid psychiatric or psychological disorder. Dr. Eisenberg’s statements were more related to his opinion that the notion of ADHD as a primarily genetic disorder was overstated and to the haphazard approach of pediatric diagnoses of this disorder as opposed to the actual legitimacy of the disorder itself.

When a child is being assessed for ADHD, the child should receive a full medical workup that can identify other issues that might explain the behavior. In addition, a full psychological/psychiatric evaluation should be included in order to better understand why the child is behaving in a manner that raises concern. Adults diagnosed with ADHD should have some evidence that is documented regarding the presence of symptoms that interfered with their functioning before they were 12 years old. Failure to adhere to strict diagnostic protocols regarding disorders like ADHD results in a high number of false-positive diagnoses.

co-occurring disorders
Your Next StepsDon't gamble on your addiction.