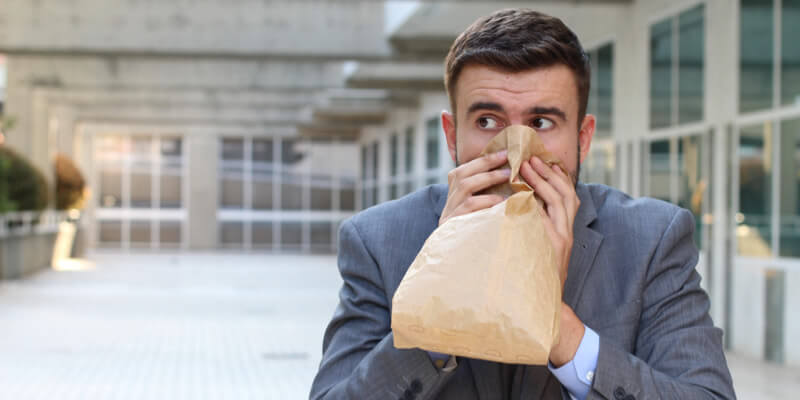 A panic attack consists of an abrupt search of intense feelings of fear that typically reaches its peak within a few minutes and consists of a set of diagnosable symptoms. According to the American Psychiatric Association (APA), there are 13 potential symptoms that can be used to diagnose the presence of a panic attack. In order for an individual to experience a formal panic attack, they must exhibit four or more of the 13 symptoms. According to the professional diagnostic manual published by the APA to be used in the diagnosis of mental disorders, the Diagnostic and Statistical Manual of Mental Disorders – Fifth Edition (DSM-5), the 13 potential symptoms that can identify a panic attack are:

According to the DSM-5, simply having panic attacks is not diagnosable as a formal mental health disorder. Panic disorder is a true psychological/psychiatric disorder where the individual experiences recurrent panic attacks and then engages in a period lasting for one month or longer of one or both of the following:

Individuals cannot be diagnosed with panic disorder if their behaviors/symptoms are due to the use of some substance of abuse or medication, some other medical condition (e.g., hyperthyroidism or hypothyroidism), or can be better explained by some other mental health disorder.

According to APA and other sources, such as the book Kaplan and Sadock’s Synopsis of Psychiatry:

The experience of having an occasional panic attack is a relatively common occurrence and is most likely not associated with the development of significant substance abuse. Many people experience transient issues with anxiety that dissipate over time. These rather typical experiences are not considered to be significant enough to dispose individuals to develop substance use disorders in most cases. In instances where the experience of occasional panic attacks is associated with individuals turning to drugs or alcohol as compensatory strategies, most sources propose that these individuals have some other co-occurring mental health condition prior to their substance use/abuse.

The significant association between being diagnosed with an anxiety disorder, such as panic disorder, and also being diagnosed with a co-occurring substance use disorder is not as simple to explain as it may appear. The notion that individuals with panic disorder begin to use substances in an effort to self-medicate their symptoms is valid in some cases, but it fails as an overall explanation of the relationship between substance abuse and panic disorder. Information provided by sources, such as APA, the National Epidemiological Survey on Alcohol and Related Conditions, and other research sources, indicates the following:

While it is true that in some cases individuals may begin to use drugs or alcohol to self-medicate and deal with their anxiety, research indicates that the relationship between substance abuse, substance use disorders, and anxiety disorders is quite complex and most likely involves significant genetic vulnerabilities interacting with experience that resulted in individuals being more vulnerable to develop any type of mental health disorder. Individuals who meet the diagnostic criteria for any formal mental health disorder are at an increased risk to be diagnosed with some other disorder, including a substance use disorder.