What Are the Dangers of Smoking and Snorting Meth?

Methamphetamine goes by numerous street names, including meth, crystal meth, and glass. The medication is still used in some cases for the treatment of attention deficit hyperactivity disorder (ADHD), for weight control, and to treat sleep disorders; however, its medical use is relatively rare. Most people identify methamphetamine as a drug of abuse.

It is a tightly controlled drug that is classified in the category of Schedule II controlled substances. The medications in this category can still be used legally with a prescription from a physician, but are at the highest level of control.

The illicit use of methamphetamine is most often associated with privately manufactured forms of the drug. It can be manufactured easily with different products that can be found in drugstores, hardware stores, and supermarkets.

As a drug of abuse, it can be taken orally, smoked, snorted, or injected. Two of the most common routes of abuse are smoking forms of the drug and grinding up the drug and snorting it.

The psychoactive effects of the drug are intense and produce euphoria, very strong feelings of invincibility, and a rush of energy that will typically dissipate rather rapidly. As a result, abusers often spend hours bingeing on the drug to maintain these effects. Over time, the euphoria may be replaced with paranoia, aggression, and psychosis.

As meth is a stimulant drug, it also can place a significant burden on numerous organ systems, on an individual’s ability to function normally within their environment, and on society due to lost productivity and the cost of treatment for those who develop stimulant use disorders as a result of methamphetamine abuse.

The Mechanism of Action of Methamphetamine

According to the National Institute on Drug Abuse (NIDA) and the DEA, methamphetamine works by increasing the availability of neurotransmitters in the brain, particularly norepinephrine and dopamine. This drug is a very powerful central nervous system stimulant drug. When abused, it results in: 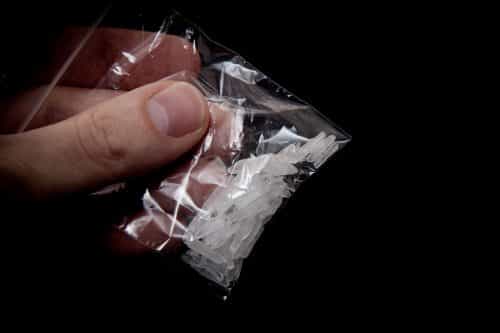 When abused, the psychoactive effects of meth are realized very quickly and wear off rapidly. The rapid onset and rapid dissolution of these desired psychoactive effects results in abusers of the drug often bingeing on it until the available amount of the drug is entirely depleted. They then attempt to find more of the drug to keep from experiencing a “meth crash.” The massive neurotransmitter release that occurs when methamphetamine is abused is followed by a massive depletion of neurotransmitters in the brain that results in the opposite effects that the drug produces.  The crash consists of:
<ul”>

The Physical Effects of Methamphetamine Abuse

According to NIDA and research studies, in addition to the psychoactive effects mentioned above, abuse of methamphetamine is associated with a rapid development of tolerance to the drug. Tolerance refers to a physical and psychological adjustment to the drug that occurs when a person begins to use a drug on a regular basis. As the person uses the drug more frequently, the individual’s system makes adjustments that counteract the effects of the drug, and the person’s perceptual awareness of the psychoactive effects of the drug become deadened.

Individuals who abuse methamphetamine, whether they smoke it or snort it, will very quickly find that they need more and more of the drug to produce effects that were similar to the effects they initially achieved when using the drug. Moreover, as a person continues to abuse the drug, they become desensitized to the desired psychoactive effects, such as euphoria.

These initial feelings of euphoria are very salient in those without a significant history of drug abuse, but according to the incentive sensitization theory of drug abuse, as the person continues to abuse the drug, they experience diminishing returns. Instead of using the drug to produce high levels of euphoria and wellbeing, they use it to avoid the negative feelings that occur when they go without the drug. As this cycle continues, the person experiences less euphoria under the influence of the drug.

Chronic abuse of methamphetamine and rapid tolerance result in the tendency to binge on the drug for lengthy periods of time.  This cycle of bingeing leads to an increase in the risk of overdose.  An overdose of a powerful central nervous system stimulant like methamphetamine can be potentially fatal. Seizures can occur that can lead to significant brain damage, or heart attack or stroke may occur.
NIDA reports various physical effects of methamphetamine abuse.

Long-term use of methamphetamine is associated with numerous health issues in different organ systems.

Methamphetamine abusers will also begin to display changes in their behavior. They may begin to opt out of important personal and professional obligations. There is nearly always a significant decline in productivity. This can occur in school, at work, or in personal aspects of life.

Chronic abuses of methamphetamine will often begin to neglect their personal hygiene and self-care. This can lead to an increased potential to contract infectious diseases or develop certain forms of cancer. Chronic use of methamphetamine is associated with the development of a stimulant use disorder.

Some of the above issues may resolve with continued abstinence from meth, whereas others may not. For instance, liver damage may resolve if the individual becomes abstinent in the early stages of deterioration of the liver, but over time, the damage may not be reversible. This is also true with damage to other organ systems.

Issues with dentition often require professional intervention in order to be corrected. Problems with the skin can resolve with treatment and abstinence, but some individuals may find they have issues with dry skin for many years following abstinence from methamphetamine.

The central nervous system consists of the brain and spinal cord. It is the control center for all of a person’s actions and bodily functions. The existing body of empirically based research investigations regarding the long-term effects of methamphetamine abuse suggests that there are numerous effects to the central nervous system.

Research studies have also found that chronic abusers of methamphetamine are more vulnerable to suffering traumatic brain injuries than individuals who did not abuse the drug. Individuals who have compromises to the brain and spinal cord as a result of methamphetamine abuse and also experience a traumatic brain injury are far less likely to experience significant recovery.

The results of chronic methamphetamine abuse on the central nervous system can lead to numerous cognitive issues.

The research indicates that many of the above cognitive issues and changes in the brain that occur as a result of chronic methamphetamine abuse may not fully resolve even with long-term abstinence. For instance, individuals with chronic histories of methamphetamine abuse are at an increased risk to develop cardiac issues or even stroke over their lifetime compared to individuals who have not abused methamphetamine. These individuals will also often continue to demonstrate problems with cognition that represent significant damage to the central nervous system such as issues with maintaining attention and problems with emotional control or impulse control.

Moreover, individuals with a history of methamphetamine abuse may be more vulnerable to developing other types of substance use disorders. This is why individuals with histories of substance use disorders should remain in recovery-related activities for many years following their initial abstinence. While the effects of methamphetamine abuse can be substantial, complete and sustained recovery is possible with proper treatment and support.