What Is Crystal Meth Made From? Ingredients & Meth Cutting Agents

Crystal methamphetamine, or crystal meth, is a glass-like substance that is smoked in a pipe but may also be snorted or injected. It is a stimulant drug that lifts mood, increases energy, and makes users feel more alert. It is very addictive and can lead to withdrawal symptoms such as depression, cravings, and nervousness.1

Producing the drug is relatively easy. There are few special ingredients required and few technical skills needed. Once the production process is complete, people have a drug that is both powerful and cheap. However, the chemicals used to make meth are toxic and dangerous and can harm people near the production area as well as the environment.

Over the past decade, production of meth has shifted from domestic labs to Mexico, largely due to crackdowns on pseudoephedrine, a key ingredient in meth found in cold medicines.

The active ingredient in methamphetamine is pseudoephedrine. It is used as a decongestant in cold medications to unblock stuffy noses and clogged sinus passages. Making pseudoephedrine into meth involves a number of different chemicals.

Most of the chemicals are not made for human consumption. They are dangerous, but people who use meth ingest these things every time they use.

For individuals making and using meth, the risk is extremely high. We can help you or a loved one recover from meth addiction. Call us at to learn about our many treatment offerings that span from medical detox to residential rehab to outpatient treatment programs.

Most of the ingredients used to extract and synthesize meth are volatile and flammable. The manufacturing process generates toxic fumes that can harm anyone exposed to them, and the process also gives off extremely explosive gases.2

The ingredients are also highly toxic. Every pound of meth can create up to 5 pounds of toxic waste that can seep into the soil and groundwater.2 The waste products from meth can make surrounding farmland and forests unusable until a hazmat team cleans it. Cleaning a lab can often be expensive and drains public safety resources.3

How Much Meth Is Being Produced in the United States?

Laws such as the 2005 Combat Methamphetamine Epidemic Act limited production of meth in the United States by reducing access to cold medications that contain ephedrine or pseudoephedrine. Currently, most of the meth in the United States is actually produced in “superlabs” in Mexico. They can cook up to hundreds of pounds of meth a day that test at 95% to 99% purity.5 However, there are still thousands of labs in operation in the U.S. 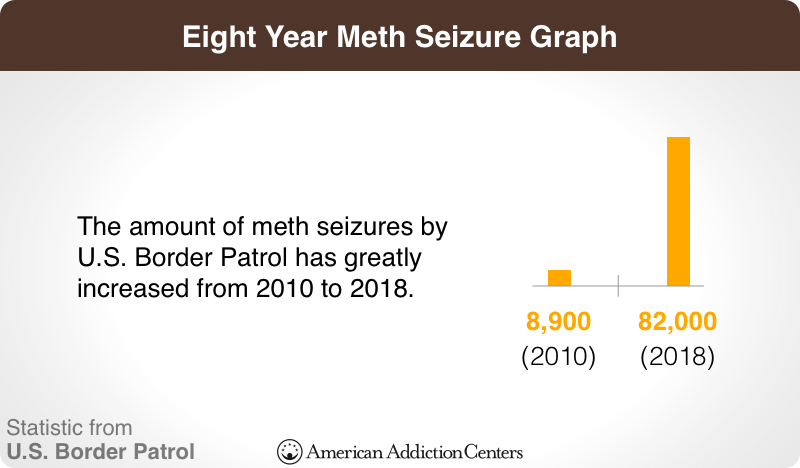 According to the U.S. Border Patrol, meth seizures increased from 8,900 pounds in 2010 to almost 82,000 pounds as of October 2018. However, lots of the meth smuggled into the U.S. is not seized, so the number is probably higher.5

This shift in meth production can be seen in the reduction in domestic meth lab incidents tracked by the Drug Enforcement Administration (DEA). Before the 2006 law went into effect, there were 24,248 lab incidents in the U.S. Since the law was passed, the number of incidents has gone down, with 9,854 incidents in 2014.6

How Hard Is It to Get Enough Pseudoephedrine to Make Meth?

It has become much more difficult to buy enough pseudoephedrine to make meth.

The Combat Methamphetamine Epidemic Act of 2005 banned over-the-counter sales of medicines that contain ephedrine or pseudoephedrine and limited sales to behind the counter. It limited the amount of pseudoephedrine that a person could purchase each month, and retailers like drug stores have to check buyers’ identification and keep personal information about them for 2 years.7,8

Different states also have more specific laws to track the sales of ephedrine or pseudoephedrine. For example:9

How Successful Has Law Enforcement Been in Stopping Meth Production?

Law enforcement has been part of a larger education initiative across the United States to help police, public works employees, hotel staff, and communities identify the presence of meth labs and report them. One of these initiatives was a successful campaign by the Department of Justice’s Office of Community Oriented Policing Services from 1998-2002.11 The campaign led to increased lab identification and formed partnerships between lab enforcement and other local agencies.

As mentioned above, this growing awareness, combined with the 2005 crackdown on pseudoephedrine sales, has led to a decline in domestic meth production.

In the past 5 years, the amount of meth seized has tripled, while seizures of other drugs have declined or seen only slight increases.

But with this decline has come an increase in production in Mexico. Law enforcement now focuses on seizing meth at border entry points and highway stops. In the past 5 years, the amount of meth seized has tripled, while seizures of other drugs have declined or seen only slight increases.12 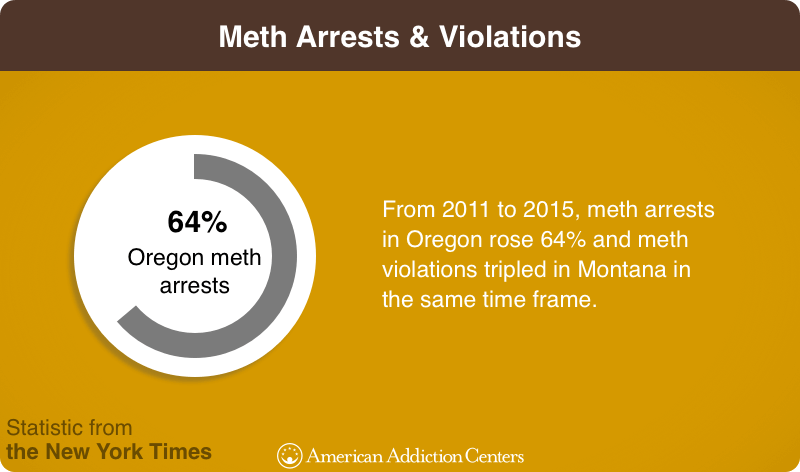 What Are Average Jail Sentences for Possessing, Making, or Selling Meth?

Crystal meth is an illegal drug, so it is tightly regulated by the federal government through the DEA.

Possessing a small amount of crystal meth may be considered a misdemeanor and could carry a minimum sentence of a monetary fine or a few weeks or months in prison. But some states have more severe penalties. Felony possession, or production, can carry large financial penalties in additional to several months or even years in jail.

In Oklahoma, the penalty for manufacturing 50 grams or more of methamphetamine can lead to 20 years to life in prison and up to $50,000 in fines.14

Crystal meth is considered one of the most addictive substances available. An analysis by Frontline suggests that a hit of meth can cause levels of dopamine—a chemical in the brain that causes feelings of pleasure—to rise to about 1,250 units. By contrast, sex causes dopamine levels to jump to 100 to 200 units, and cocaine causes them to jump to about 350 units. The effects can last between 6 and 12 hours.4 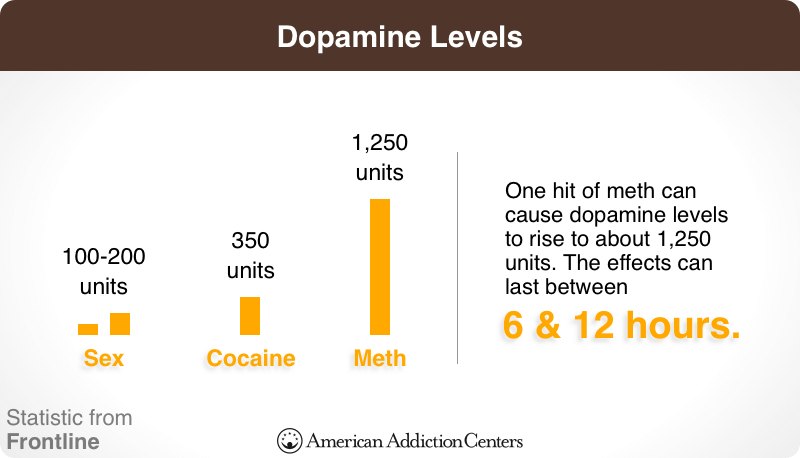 Meth addiction can be extremely difficult to beat. The most effective therapies appear to be behavioral therapies such as cognitive behavioral therapy and contingency management, which rewards people for drug-free behaviors. The Matrix Model, a 16-week program, combines behavioral therapy, family education, one-on-one counseling, 12-step programs, and drug testing.15

No medications are currently available to help people stay clean from meth. However, several are in development.15

Many inpatient and outpatient programs across the country can treat meth addiction. If you or someone you know needs help for a meth addiction, explore your options today. Don’t wait until it’s too late. We can help you discuss your treatment options confidentially. There are many options available vary from inpatient rehab to local NA meetings.

As opioids claimed America’s attention, meth use surged in the United States, reaching crisis levels. If your life or that of someone you love has been devastated by meth addiction, there is hope.

If you or someone you love is struggling with addiction and are ready to take the first steps towards recovery, call us today at . Desert Hope, American Addiction Centers’ Las Vegas meth addiction rehab center, is ready to help you get the treatment you need today.