Crystal meth is a particular form of the drug methamphetamine (“meth” for short) named for its appearance.

The production methods of this substance cause the end product to look like small crystals or shards of glass. These are often heated up to be smoked or dissolved into a solution to be injected directly into one’s veins. Based on the 2017 National Survey on Drug Use and Health (NSDUH), it is estimated that over 14 million Americans ages 12 and up have used methamphetamine at least once in their lifetimes. 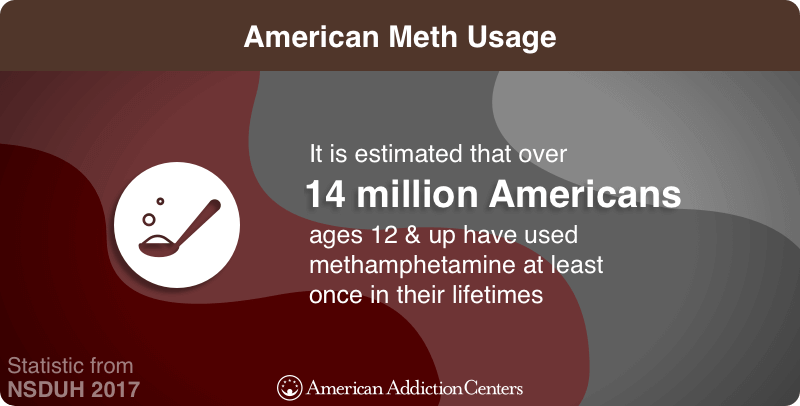 Meth is a highly addictive stimulant drug that can cause a rush of euphoria followed by the other effects of meth, such as high energy and decreased appetite. The rush often only lasts for around 5 minutes to a half-hour at most. However, the other effects may last 6 to 12 hours. To maintain the pleasant effects and prevent the “crash” that follows, in which users may experience opposite effects like fatigue and depression, people tend to take repeated doses. This behavior is referred to as “binging.”

Repeated drug use can result in the user building up a tolerance to the substance. Tolerance occurs when a substance is present in the body enough that the body begins to adjust to it. Users then need higher and higher doses of the drug to achieve the same effects. Dependence is when a person’s body only functions normally if the drug is present; individuals can become dependent on methamphetamine. When intake of the drug stops, these individuals then experience withdrawal.

Worried about your crystal meth use? Take our free and confidential addiction assessment today.

Meth withdrawal symptoms can be very intense. Though stimulant withdrawal is not as dangerous as withdrawal from some other drugs (such as alcohol or sedatives), it can be very unpleasant and potentially harmful. Cravings may last for 5 weeks or more.

Crystal meth withdrawal symptoms may include:

Psychosis, paranoia, and severe depression are some meth withdrawal symptoms that may be especially dangerous because they can lead to harming oneself or others. Anyone with serious symptoms should seek medical care immediately.

Meth withdrawal symptoms may last for only a few days or persist for a few weeks. The acute phase may be worst on the second or third day after last use. Some symptoms, such as cravings, sleep problems, and mood swings, may persist another couple weeks. Depression may even last months or a year in severe scenarios.

Many people experience a “crash” when they stop using meth, but not all of these individuals will have a full withdrawal syndrome. A crash may last a few days. Common symptoms include:

Most meth in the U.S. is manufactured in Mexico then transported to the US. To restrict meth production in the U.S., pharmacies and other stores are required by law to keep documentation of purchases of pseudoephedrine-containing products and to institute measures to limit sales of those products. Pseudoephedrine is commonly used in the manufacture of meth.

This drug is dangerous and can cause serious physical and mental harm. Meth is very addictive, but it is possible to overcome an addiction to crystal meth. Behavioral therapies, such as cognitive-behavioral therapy and motivational incentives, can treat meth addiction.

Are there medications for meth dependence?

The U.S. Food and Drug Administration (FDA) has not approved any medications for treatment of meth dependence. However, some medications may be beneficial. Here are a few that may help:

While none of these drugs have been approved to treat meth dependence, they may be useful, depending on the individual.

What is the safest way to detox from meth?

Because meth withdrawal may lead to depression, anyone going through withdrawal should be watched for thoughts of harming themselves. Individuals with other physical or mental health issues, an increased risk of prolonged or significant withdrawal, meth exposure at home, and/or unstable housing may need residential or inpatient care during detox.

How much does a meth detox program cost?

Several factors may affect the out-of-pocket cost of a detox program, such as whether the program is inpatient or outpatient, insurance coverage, and individual program pricing differences.

It can be helpful to contact one’s insurance provider to find what is covered.

How can you avoid relapsing after detoxing from meth?

After detox, an individual should engage in substance use disorder treatment. Detox only is generally not enough assistance for a person to avoid relapse long-term. One study found that 61 percent of participants reported they had used meth within a year after leaving treatment. However, they also found that a longer treatment episode and engaging in some type of addiction treatment or self-help while abstinent after treatment were both linked to longer durations of abstinence before relapse.

Relapse is often part of the disease of addiction. Relapse does not mean failure. When a person relapses, it is a sign that they need to engage in treatment again or, if they are already in treatment, need adjustments to their treatment plan.

methwithdrawal
Prefer getting help via text?
We're available 24/7 via text message. Signup below for access to our team when its convenient for you!
and many more...
Get the Info & Help You NeedWe're open across the US. Learn about your options.