How Long Does Meth Stay in Your System?

Methamphetamine is a stimulant drug that could, in theory, be used to speed up metabolism and help people feel peppy and energetic. In reality, people who take this drug often do so for entirely different reasons. These people want to feel a chemically induced sense of euphoria. Methamphetamine can deliver that feeling through a complex chain of chemical reactions that can persist within the body for quite a long time. 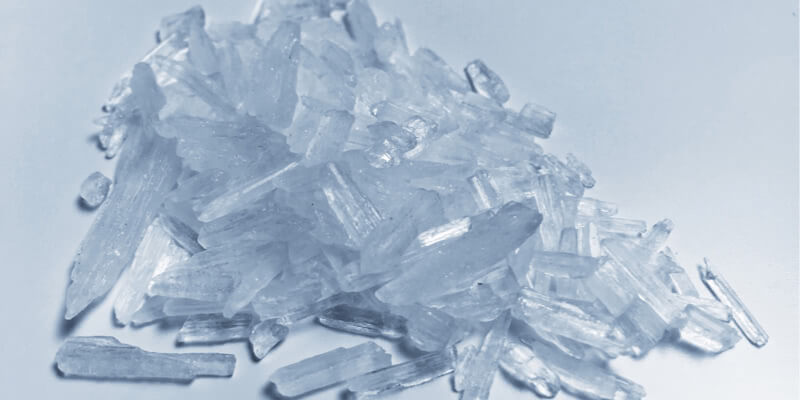 Worried about your crystal meth use? Take our free and confidential addiction assessment today.

When users take in methamphetamine — either through sniffing a powdered form of meth, by smoking a crystalline form of the drug, or by eating powdered forms of the drug — the molecules cross into the brain. Once there, they encourage brain cells to release a great deal of a chemical called dopamine. This is a signal the brain typically releases in response to happiness or joy. Meth hijacks that system and makes a person feel chemically happy.

According to the National Highway Traffic Safety Administration, meth works in much the same way, regardless of whether it is smoked or sniffed. But the speed at which meth acts upon brain cells can be influenced by the drug-use method people choose. Those who eat the drug experience sensations at a slower rate than people who snort or sniff it.

Meth in the Body

According to Project NEON, molecules of meth are metabolized by the liver. This organ works a little like a filtration system for the blood, processing the liquid and removing anything that seems unusual or foreign. But meth can tax the liver, as removing all of those particles can be difficult. In some cases, meth can cause the liver to work so hard that it actually shuts down. When the liver can no longer clean the blood, life-threatening complications can take hold. Some people die due to meth-induced liver damage.

Even when the liver is functioning well, meth can stay active within the body for long periods of time. Any remaining meth that the body cannot use is pushed through the liver and out to the kidneys, where it is excreted through urine. In a study published in the Annals of the New York Academy of Sciences, researchers report that meth can still be detected in the urine for four days after the last dose was taken. That suggests that meth could be working in the body, and changing things for the worse, for at least four days.

People who abuse meth can overcome that addiction. Treatment programs often use a multipronged approach that involves:

Treatment programs last for at least 90 days, and then the program downshifts to a less-intense maintenance phase, in which people continue to learn and grow while living at home and in their communities. At the end of a program like this, people might be well aware of the damage meth can cause. They can then be well prepared to deal with meth’s challenges in the future.

How long does meth stay in blood?

How long does meth stay in urine?

How long does meth stay in your saliva?

How long does meth stay in your hair?

How long is a meth high?

As reported by Frontline, a meth high lasts about 8-24 hours. The length of the high will depend somewhat on the method of use. The National Institute on Drug Abuse states that smoking or injecting the drug will result in a higher-intensity high that may last only a few minutes, while snorting or ingesting it will produce a milder, longer-lasting high.

The drug’s half-life, which is the amount of time it takes the body to eliminate half of the dose, is about 12 hours. It takes about three days to eliminate the drug entirely from the body.

Is there a meth comedown?

Meth causes the person taking it to feel a rush of pleasure, intense focus, loss of appetite, and the sense of being able to accomplish anything. When the individual stops taking the drug, the experience is just the opposite. The comedown from meth is often described as a “crash.” Once the high ends, the individual generally begins to experience the following symptoms:

Depending on how long the individual has been taking meth, this crash can be more or less severe. For people who have been using meth for a long time, it may take more than a year to begin to feel pleasure again.

How much crystal meth can cause an overdose?

The amount of crystal meth that can result in overdose depends on a number of factors, including:

Smoking or injecting the drug can more easily result in dangerous symptoms, as these methods transport the drug through the bloodstream to the brain much more quickly than ingesting or snorting. However, it is possible to overdose no matter the method of use. According to the National Library of Medicine, signs of overdose include:

Can having other drugs in the system affect how long it takes meth to cycle through the body?

When a person uses a drug, the body’s natural cleaning system – which operates mostly through the kidneys – has to step in and remove toxins produced by the metabolism of the drug, as described by Columbia University. The higher the level of the toxins, the harder the kidneys have to work to remove them from the body.

When a person engages in polydrug use, the kidneys and the rest of the elimination system have to work harder, which can slow down the process of elimination. This can cause meth to take longer to be eliminated from the body, as explained by Mental Health Daily. In addition, the hard work the kidneys do to eliminate drug toxins can damage these sensitive organs, resulting in other health issues.