Levels of Depression: When Is Professional Treatment Needed? 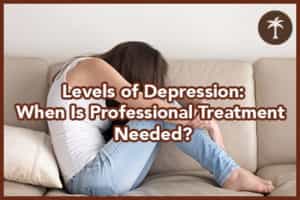 A serious and common mental illness, depression is the number one cause of disability in the world, affecting about 350 million people, the World Health Organization (WHO) reports. Within the United States, the Centers for Disease Control and Prevention (CDC) estimates that one out of every five Americans suffers from a mood disorder like anxiety or depression. According to the National Alliance on Mental Illness (NAMI), women suffer from depression more often than men, as they have a 70 percent greater risk of developing the disorder. Young adults between the ages of 18 and 25 also have a higher risk (60 percent higher) than those over the age of 50, per NAMI.

There are many levels of depression, from mild bouts of sadness to overwhelming negative and disturbing emotions that may lead to suicidal thoughts and actions. Depression can affect the way a person thinks and feels, and it can interfere with the performance of regular everyday tasks like sleeping, eating, social activities, and work or school functions. General signs of depression include:

Not every symptom from the above list will be present in everyone who battles depression. Individuals may suffer from only a handful of these symptoms. Most people likely feel “blue” at some point in their lives, but it is when these feelings start to impact daily life and persist for two weeks or longer that it may be diagnosable as a major depressive episode. Someone suffering from a major depressive episode likely gets little to no relief from the feelings of sadness, malaise, and depressed mood, as these feelings may pervade their thoughts consistently. The National Institute of Mental Health (NIMH) publishes that in 2014, over 15.5 million American adults (aged 18 and older) suffered from one or more major depressive episodes in the previous year.

The Depression and Bipolar Support Alliance (DBSA) publishes that close to 80 percent of those who receive treatment for depression show improved symptoms within a month or so. Early diagnosis and professional treatment can help to alleviate even mild symptoms of depression. Cognitive Behavioral Therapy (CBT) and the use of antidepressant medications can help to break patterns of negative thoughts and decrease depressive episodes. As a result, depression is a highly treatable disorder, Psychology Today reports. Anytime depressive symptoms persist for at least a two-week period, it may be a sign that it is time to seek professional help.

Depression is not caused by one specific factor or incident, but rather, it is most often due to a number of contributing factors. Genetics and biology may certainly play a role in the onset of depression, as brain chemistry and regions of the brain responsible for feeling pleasure, processing reward, and garnering motivation may not function as they should. Environmental factors, like experiencing a trauma, chronic exposure to high levels of stress, and childhood neglect and/or abuse, may predispose someone to suffer from depression. Stress causes levels of the hormone corticotropin-releasing factor (CRF) to increase, for instance. The Brain & Behavior Research Foundation reports that studies show heightened levels of CRF in individuals diagnosed with depression. Other parts of the brain, such as the hippocampus and frontal lobe, may also be impacted by both stress and depression.

Abusing substances like drugs or alcohol, which also interact with the brain’s circuitry and chemical messengers, can also increase the risks for developing depression. NAMI publishes that of those who struggle with issues related to substance abuse, about 30 percent also suffer from depression. Substance abuse and depression, when combined, form a complicated picture, as each may predispose a person to the other disorder. It may also be difficult to discern which may have come first, the depression or the substance abuse. Regardless of which came first, however, substance abuse can complicate treatment and exacerbate depressive symptoms, just as depression may increase the risk factors and side effects of drug and alcohol abuse, and interfere with treatment measures. When depression and substance abuse co-occur and a dual diagnosis is made, an integrated treatment model that manages both disorders at once is generally thought to be the most beneficial.

Getting Help for Depression 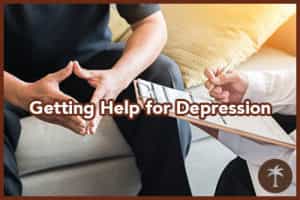 Suicide is a potential risk factor for depression, and self-destructive thoughts or behaviors may be heightened when drugs or alcohol are added to the picture as well. The CDC reports that in 2013, close to 4 percent of American adults reported suicidal thoughts in the previous year, and suicide was 10th on the list for leading causes of death in the United States.

Depressive symptoms can be treated with a variety of methods in many different settings. For example, clinics, hospitals, physicians’ offices, counseling centers, community outreach facilities, outpatient programs, residential facilities, and substance abuse treatment centers may all be places where someone battling depression can get help. Mental health professionals, such as psychiatrists, counselors, therapists, and psychologists, can all provide services for those suffering from depression. When someone also struggles with issues surrounding drug or alcohol abuse or addiction, a substance abuse treatment facility may be the optimal choice for care. Behavioral therapies, including CBT, are often coupled with medications, like antidepressants, and holistic measures, such as mindfulness meditation, during treatment for depression. In the case of substance dependence and/or addiction, medical detox in a safe and secure facility may be beneficial initially as well.

No two people will react to treatment in exactly the same way, so it can be very useful to undergo a complete and comprehensive evaluation and assessment before entering into a specially and individually designed treatment program. The Substance Abuse and Mental Health Services Administration (SAMHSA) provides a Behavioral Health Treatment Services Locator tool that families and individuals can use to find local services.

Insurance may cover services related to both depression and substance abuse, and insurance providers and professionals at substance abuse treatment facilities can be wonderful resources in determining how to go about using insurance coverage for these services. Many insurance plans may require individuals to remain in-network, and choose a provider from a specified list, as well as first obtaining a referral from a primary care physician. Making an appointment with the primary care provider can be a great place to start discussing potential depressive symptoms and determining what the next steps may be. These professionals can also provide referrals to specialty services when needed or as required for insurance purposes.