What Is Sertraline (Zoloft)?

Sertraline is the generic name for a popular selective serotonin reuptake inhibitor (SSRI), a type of antidepressant most commonly prescribed under the brand name Zoloft. The medication is prescribed to treat major depression, obsessive-compulsive disorder, panic attacks, social anxiety disorder, generalized anxiety disorder, post-traumatic stress disorder (PTSD), and, sometimes, premenstrual dysphoric disorder (PMDD). Zoloft was first marketed in the UK in 1990 by Pfizer; it was approved for sale in the US in 1999, and it was the most popular antidepressant in the US by 2005.

Since sertraline is in the family of SSRIs, the medication elevates mood by moderating how the brain uses serotonin. The neurotransmitter is closely tied to mood, and when the brain does not have enough serotonin present, the individual can experience depression, feelings of sadness, anhedonia, and low mood and physical energy. SSRIs stop serotonin from being rapidly reabsorbed, so the neurotransmitter is available longer in the synapses; as a result, neurons can better communicate with each other. When neurons can more easily communicate, the individual’s mood improves.

Prescription Dosing for Sertraline or Zoloft 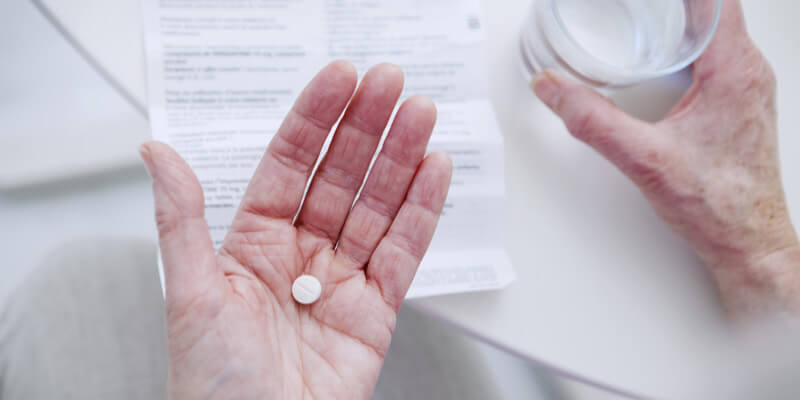 Sertraline is available as a tablet , capsule, and a liquid solution. It is taken orally, once per day. The medication can take a few weeks to become fully effective in treating psychiatric symptoms, so it is important to be patient and continue taking sertraline as prescribed. Tablets come in 25 mg, 50 mg, and 100 mg; the liquid is available at 20 mg per mL.

Dose size depends on what sertraline or Zoloft is prescribed to treat, but generally, the physician or psychiatrist will begin with the lowest possible dose, and then increase the dose every few weeks until the dose is most effective. Sertraline should be taken consistently once per day unless the medication is treating PMDD; then, the woman taking it may experience benefits if it is taken only during one specific week of the menstrual cycle. Doses for depression or anxiety-related conditions typically start at either 50 mg or 100 mg and will be adjusted as necessary.

The Positive Effects of Sertraline

SSRIs like sertraline typically work well in treating depression, and they have been effective in long-term treatment of anxiety disorders too. However, sertraline is not designed to treat mood disorders or other mental health issues alone. It is important to take these medications in conjunction with regular therapy sessions with a licensed therapist. This combination has been shown to be the most effective, long-term treatment for mental health concerns.

Because this medication acts on brain chemistry, there are some potential side effects from taking it. When a person takes a dose that is appropriate for their needs, side effects are rare. If they do occur, they could be an indication that the person is taking too much sertraline.

Side effects from sertraline or Zoloft include:

Sertraline has been linked to weight gain in some people. While this does not present physical danger for many people taking this antidepressant, some individuals are more susceptible to weight-related health problems, including heart disease and diabetes. It is important to work with a doctor to moderate weight, especially if health concerns like high blood pressure, cholesterol, or blood sugar appear.

Some side effects from sertraline indicate a medical emergency, like an allergic reaction. These include:

It is important to get emergency medical help by calling 911 immediately if these symptoms begin.

Additionally, people ages 24 years old or younger are more susceptible to developing suicidal thoughts or actions while taking sertraline. This is a very severe condition, and a doctor or therapist should be notified immediately. Although antidepressants are intended to prevent these feelings and low moods associated with suicidal ideation, some adolescents and young adults may experience rebound suicidal thoughts.

Like other SSRI antidepressants, sertraline has few long-term side effects besides dependence. About 1 percent of patients who took sertraline had signs of mild liver abnormalities, so the medication may exacerbate pre-existing liver damage or related health problems. SSRIs can also increase the risk of heart conditions if a problem existed already, but they have not been linked as the cause of heart conditions.

Since sertraline changes brain chemistry, the medication can lead to physical dependence. Although dependence is sometimes associated with addiction, the two are not the same; addiction involves compulsive ingestion of intoxicating substances, specifically to experience a euphoric effect. Dependence occurs when the body needs the presence of a specific substance to reach equilibrium. People who struggle with addiction often develop a physical dependence on the substance but also increase their dose over time to continue to experience euphoria.

Since SSRIs do not act quickly on brain chemistry, they do not induce a sensation of being high, so they are less likely to become the target of abuse. People who struggle with substance abuse, including polydrug abuse, may attempt to abuse sertraline. However, it is unlikely to trigger addiction in people who do not have a personal history of substance abuse already.

Stopping Use of Sertraline

It is possible to overdose on sertraline. This typically occurs if a person takes too much sertraline, or mixes sertraline with other antidepressants, particularly more potent antidepressants like tricyclics or MAO inhibitors. This can cause a condition called serotonin syndrome, in which the brain has too much available serotonin, and neurons fire rapidly. This can cause dangerously elevated mood, bordering on mania, along with other dangerous symptoms.

If sertraline is not effective in treating depression or another condition, another SSRI may work better. This class of medications is considered among the best options for treating mood disorders, when combined with appropriate therapy. However, SSRIs or other antidepressants may not work for everyone.

Unfortunately, there are not many medications that are alternatives to antidepressants in general. If panic or anxiety is part of the depression or other mental health condition, another psychiatric medication, like benzodiazepines, may be a short-term treatment when symptoms increase. However, benzodiazepines are very habit-forming, since they act on the brain in a similar way as alcohol and should not be taken longer than two weeks.

Additionally, psychiatric medications, including sertraline, should not be taken as the sole treatment for a mood disorder. A person struggling with depression or anxiety needs to focus on therapy, and they may find that therapy alone is effective, compared to a combination of therapy and medication.

Since sertraline or Zoloft is an effective mood-stabilizing medication, it may be prescribed to some people who struggle with co-occurring disorders to manage their depression or anxiety and prevent relapse into substance abuse. Some SSRI medications are occasionally used in the long-term treatment of alcohol use disorder, but sertraline has not been indicated as effective in this application. The medication has also been tested as a potential treatment to help people struggling with methamphetamine abuse, but it was not effective.

Although sertraline may not have specific applications in the rehabilitation process, it may be a useful tool, alongside therapy, to manage mood on a long-term basis and reduce cravings or the potential for relapse in people whose mood disorders led them to struggle with substance abuse problems. Sertraline or Zoloft by itself is not an effective treatment for addiction, but it can be one of many tools used in the process of recovery.

antidepressants
Ready to get started?
We're available 24/7 to answer questions and help you make decisions about starting recovery from drug use.
Your Next StepsRecovery is possible. We're here to help with your addiction.