Dangers of Mixing Adderall with Other Drugs

Adderall is a medication that is frequently prescribed to people who struggle with attention deficit hyperactivity disorder (ADHD). According to WebMD, this medication is also sometimes used to treat narcolepsy and should not be used to fend off tiredness by people who have not been diagnosed with sleeping disorders.

Adderall also has a high potential for abuse. Use of the drug, as well as withdrawal from it after a period of sustained use, should be closely monitored by a doctor. Even though it has side effects on its own, some people who are prescribed the drug are not aware of the dangers of mixing Adderall with other drugs.

Xanax is the brand name for alprazolam. This medication acts on the central nervous system and is most often used to treat anxiety. Like Adderall, it is also habit-forming and could be easily abused if not monitored correctly. The Wall Street Journal states that prescription drugs that influence the central nervous system are the most dangerous, although Xanax is safe on its own when used according to prescription and with close monitoring. Like Adderall, Xanax can also cause drowsiness in those who are using it.

According to the Journal of Ethnographic and Qualitative Research, Xanax is often used recreationally as a “downer” by people who aren’t able to come off a methamphetamine high. Many who use a combination of Adderall and another prescription drug, such as Xanax, are misinformed about the way the two drugs work. It’s a common myth that prescription drugs are safer than drugs found on the street, and the misuse of these two substances together can have unhealthy, and potentially severe, consequences.

Worried about your Adderall use? Take our free and confidential addiction assessment today.

Adderall has been known to cause or exacerbate panic attacks and cause trouble sleeping, so it is perfectly reasonable that those who use it might need relief from these side effects. Since Xanax is used to treat anxiety and help people sleep better, those on Adderall might attempt to take Xanax in an effort to counteract those side effects of Adderall. Adderall can also cause seizures, a rare but severe side effect of the drug, while suddenly stopping Xanax usage can cause seizures as well.

Alcohol is a known depressant, and Adderall is a stimulant. When Adderall and alcohol are mixed, they compete for the body’s energy and can produce dangerous side effects. Adderall use can cause people to feel more sober than they truly are, and this might cause people to drink excessively because they can’t feel the effects of the alcohol they’ve drank. 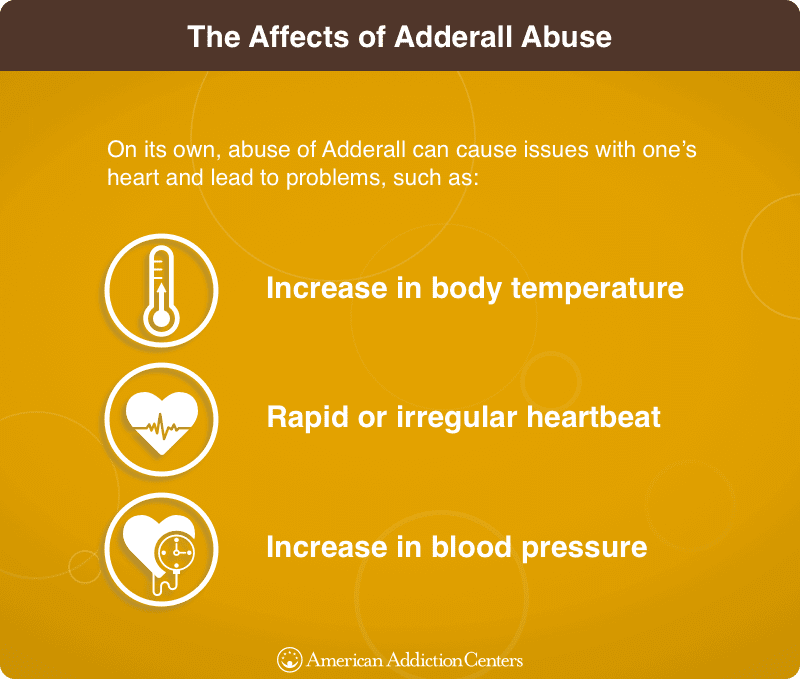 On its own, alcohol influences behavior and reduces inhibitions. Using Adderall along with alcohol amplifies this effect and could cause people to take greater risks. People who combine these two substances may miss the body’s cues that they have drank enough, and they could drink dangerous quantities of alcohol, potentially leading to alcohol poisoning.

Marijuana is a depressant, while Adderall is a stimulant. Each substance can mask the effects of the other if they are taken at the same time, so it is not recommended that these two substances are used at the same time.

Using marijuana could decrease the chances of individuals knowing that they are experiencing harmful effects of taking too much Adderall. The reduction of inhibitions caused by marijuana could also cause people on Adderall to have decreased consideration for what could happen if other substances are taken. In addition, mixing the two can cause stress since Adderall could increase heartbeat while marijuana slows it down.

Monoamine oxidase inhibitors (MAOIs) are antidepressants, and the use of MAOIs with Adderall could cause effects that would not usually appear if either drug is taken alone. According to WebMD, the combination of these two types of substances could cause hallucinations, seizures, a faster heartbeat, or an increase in blood pressure.

Taking any drug outside of a doctor’s supervision and instruction is dangerous. Mixing substances increases the risks associated with each drug exponentially. If you are taking Adderall legitimately, per a doctor’s prescription, it’s important that you avoid use of any other substance. If you have specific concerns related to your use of Adderall, discuss them with your prescribing doctor.

Side Effects of Adderall on Its Own

Adderall is a stimulant drug that includes a form of amphetamine. As a result, its main action on the body is to increase neural activity. While the main result of this is for the person to feel increased energy, confidence, focus, and performance, there are also a number of side effects that can be cause for concern.

According to Live Science, these include:

Some side effects can be very serious, such as:

Any of these more serious side effects may require a visit to an emergency room or doctor.

Some may question whether overdose is possible with the seemingly mild level of stimulant in Adderall. However, because amphetamine is such a powerful stimulant, overdose can result in some serious, potentially life-threatening symptoms. The symptoms are referred to as sympathomimetic toxidrome, which refers to toxicity that affects the sympathetic nervous system. This includes:

If overdose is severe enough, these symptoms can lead to potential lethal results. If Adderall or another stimulant overdose is suspected, it is important to get the person experiencing the symptoms into emergency care as soon as possible. According to the Centers for Disease Control, while occurrence of this syndrome has been decreasing to some degree, it is still important to continue efforts to stop abusing amphetamine-based drugs like Adderall.

The Need for Detox

When an individual is struggling with abuse of or addiction to a drug like Adderall, it is important to start the process of recovery by stopping use of the drug and allowing it to be eliminated from the body. This detox process can be very challenging, however, because the withdrawal symptoms can be uncomfortable, and potentially even painful. As explained by Mental Health Daily, withdrawal from Adderall can involve:

Because of the risk of experiencing these symptoms, even if they are relatively short-lived, it is important to enlist the help of a professional who is experienced with managing withdrawal from these drugs. Detox is vital to the individual’s ability to recover, but it should be followed with comprehensive addiction treatment.

If you or someone you love is struggling with the devastating side effects of addiction and are unsure of where to turn, call us today at . Desert Hope, American Addiction Centers’ drug rehab in Las Vegas, is ready to help you get the treatment you need today.

adderallmixingstudy drugs
Prefer getting help via text?
We're available 24/7 via text message. Signup below for access to our team when its convenient for you!
and many more...
✕
Instantly Check Your Insurance Coverage
Your information is safe & secure
At Desert Hope, we accept most types of private (non-government) insurance and offer a variety of payment options.
You can quickly and privately check your insurance benefits to see if you're covered for addiction treatment services. We’ll be able to tell you if your provider is in network with Desert Hope Treatment Center and all American Addiction Centers locations.
This means your treatment may be FREE1 depending on your policy, copay, and deductible.
Your Next StepsRecovery is possible. We're here to help with your addiction.