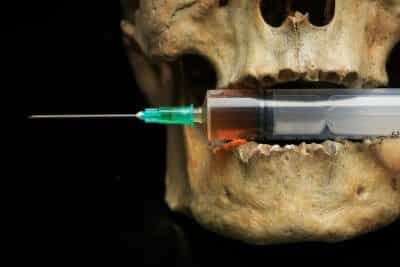 Krokodil is a very dangerous synthetically manufactured substance. The drug is manufactured by combining codeine and several other additives that may vary but can include gasoline, paint thinner, hydrochloric acid, iodine, phosphorous from matches and other sources, and other chemicals. These substances are mixed together and produce a drug known as desomorphine along with other dangerous and toxic substances.

Desomorphine (dihydrodesoxymorphine-D or dihydrodesoxymorphine) is a synthetic analog of morphine that originally was synthesized in the 1930s. It is categorized as a Schedule Icontrolled substance by the Drug Enforcement Administration (DEA). This categorization indicates that the government considers desomorphine a drug with no useful medicinal purposes, highly prone to being abused, and extremely likely to result in the development of physical dependence.

Desomorphine has a very fast onset of action, is considered to be approximately 10 times more potent than morphine, and has a very short half-life. These qualities make it a particularly dangerous drug of abuse because it produces very quick and intense effects that wear off rapidly. In addition, the mixture of toxic substances used to make krokodil is responsible for significant health risks. The name krokodil refers to the Russian term for crocodile, and it’s associated with potentially dangerous side effects that occur when the drug is injected and affects a person’s tissues (see below).

Krokodil is reputed to produce similar effects to the opiate drug heroin. According to the DEA, the primary users of the drug are individuals who can no longer afford heroin and turn to krokodil as a far less expensive alternative. Reports of the drug’s use overseas appear to indicate that it has declined in popularity. For instance, a 2015 article reported that even though the drug was once popular in Russia, it has lost favor recently, even though nearly 100,000 Russians and 20,000 Ukrainians were known to abuse the drug in 2011.

The drug apparently entered the United States in 2013. Reports of the use of krokodil in the US appear to be quite scattered and based on anecdotal data and case studies. The National Institute on Drug Abuse described the drug in 2013 and promised to update its website once statistics regarding its use in the United States were available; however, the site has not been updated, suggesting that reliable statistics on use of the drug in the US are not available or its use is not significant.

There are several case studies reported of individuals using the drug in the U.S., but there appears to be no epidemiological data regarding its use. In 2013, when the drug made its appearance and the few case studies reported were most prevalent in the media, the DEA reported that it was not seeing a significant number of cases of krokodil abuse despite these scattered case studies that were garnering some media attention.

The Substance Abuse and Mental Health Services Administration (SAMHSA) does not report desomorphine abuse in its annual statistics regarding drug use and abuse. The research literature does report several case studies of krokodil abuse in the US, such as a 2014 brief communication in The American Journal of Medicine; however, again, these are mostly case studies, and large-scale studies of the drug appear to still be confined to Europe and Asia.

Most of the information regarding the abuse of this drug in the US suggests that it is not a drug that is significantly abused, but it may be abused by individuals who are attempting to achieve the psychoactive effects of heroin use but cannot afford heroin. Sources suggest that because heroin is so available in the US that the abuse of krokodil has not become as problematic as it once was in Eastern European countries and Russia. Thus, while this is a particularly dangerous drug of abuse, the major indicators suggest that it is not a primary drug of abuse in the US. Nonetheless, the severe dangers associated with use of this drug warrant educating the public about issues regarding its abuse.

Krokodil is primarily abused via injection, although the drug can be taken orally, snorted, or even smoked. Desomorphine use is associated with a rapid development of tolerance and the rapid appearance of withdrawal symptoms. The psychoactive effects of using desomorphine/Krokodil appear to be:

Because the production of krokodil involves one or more very toxic substances, use of the drug is associated Mayo Clinic with numerous potentially serious side effects:

Due to its short half-life and quick onset of action, the drug is particularly prone to being used in excessive amounts. Potential for overdose is increased in individuals who abuse the drug. This can result in potentially fatal issues associated with the development of a comatose state and hypoxia (a lack of oxygen) or anoxia (a complete blockage of oxygen).

Reports from the DEA indicate that the expected mortality rate associated with abuse of this drug is extremely high. As mentioned, the DEA and other sources report that many individuals who begin abusing the drug are expected to have a lifespan of only a few years. In addition, severe infections of the skin that can lead to abscesses and gangrene can result in amputations and serious tissue damage.

Signs and Symptoms of Krokodil Abuse

Some other signs/symptoms that may suggest an individual is using or abusing Krokodil include:

When a person displays two or more of the above signs, they may have developed a serious substance use issue. Because abuse of krokodil is associated with potentially serious and even fatal consequences, anyone suspected of using this drug should become involved in substance use disorder treatment as soon as possible.

Desomorphine is a particularly potent narcotic (opiate) drug. Individuals who abuse this drug for any length of time are likely to develop physical dependence (displaying both tolerance and withdrawal syndromes) as well as potential physical damage associated with using the drug. The first step in the treatment process is to have the person undergo a full physical and psychological examination to determine the extent of any physical and neurological damage their drug use has produced. The treatment process should ideally feature the following components:

There is a significant positive relationship between the length of time an individual remains engaged in some form of treatment and a reduction in relapse. Individuals who remain in treatment longer have fewer relapses, recover at quicker rates when they do relapse, and have higher rates of long-term success. Thus, the treatment approach should be organized toward meeting numerous short-term goals and continuing for the long run.