How Bad Are Bath Salts? 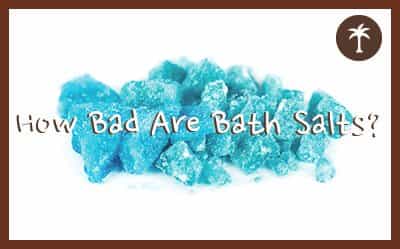 Bath salts are synthetic cathinones, a synthetic drug related to the stimulant found in the khat plant. Khat is a plant found in African and Asia, and it produces mild stimulating effects. While certain synthetic cathinone variations produce similar effects to khat, these effects are much stronger, according to the National Institute on Drug Abuse(NIDA). Bath salts is the nickname for this substance, and it should not be confused with Epsom salts or other products used in bathing.

Bath salts can be found in some over-the-counter products, but the substance is commonly obtained illegally in powdered form. This powder is often white in color but can range from yellow to brown as well. Sniffing or snorting the drug is the most widespread form of abuse, but bath salts can also be consumed orally, via smoking, or by dilution and injection, according to the Drug Enforcement Administration (DEA). Snorting and injection have been associated with some of the direst results of taking the drug and are considered by NIDA to be the most dangerous methods of consumption.

Bath salts are commonly used as a less expensive substitute for other drugs, such as cocaine, as they do have some similar effects. Methylenedioxypyrovalerone (MDPV), one of the more common synthetic cathinones, is at least 10 times more powerful than cocaine. The consumption of bath salts is usually followed by an energizing effect, which makes it attractive to drug users. Users of the drug may also experience an increase in sex drive and increased sociability.

Bath salts can have a variety of effects on a person who has consumed them. Agitation and irritability are common effects that bath salts can have on the mind, and dizziness is not uncommon. An individual who has taken bath salts can experience paranoia and depression and, in some cases, suffer from suicidal thoughts.

Short-term effects from bath salts include:

Users can also experience panic attacks and even seizures, showing the immediate danger of taking the substance. While the short-term effects of bath salts can clearly be hazardous to an individual’s health, the long-term effects of the drug can be quite dangerous as well. Consumption of bath salts can lead to a state of excited delirium, which can, in turn, result in a variety of health issues. Dehydration is common, and bath salts users can also experience the breakdown of skeletal muscle tissue and kidney failure. The most extreme cases related to bath salts use have resulted in death.

Bath salts can become addictive over the long-term, which can often lead to some of the more dramatic of the aforementioned effects. Physical dependence on the synthetic stimulants in bath salts can occur, which can result in withdrawal symptoms if an individual abruptly stops taking them. This can make it very challenging to cease use of the drug.

One sign of an addiction to bath salts is the continued use of the drug despite consistent negative effects and consequences related to its consumption. Compulsive use and cravings for the substance are other red flags that an individual could be addicted to bath salts. Those addicted to the drug often require it to experience pleasure, and they consistently use the substance in order to activate that section of their brain.

Bath salts have some similar effects to MDMA (the active ingredient in the drug more commonly known as ecstasy), cocaine, LSD, and other amphetamines. However, the use of bath salts is a newer trend than the use of these other substances. In 2011, the DEA released an emergency order to make it illegal to produce and sell many of the synthetic stimulants used in bath salts. This was done in an effort to maintain public safety due to the surge in popularity of the drugs.

There was a multitude of high-profile incidents involving bath salts leading up to that order, particularly in Florida, which prompted the emergency legal action taken by the DEA. However, bath salts were also blamed for events in which they played no part, such as the infamous Miami cannibal attack.

It was clear that the use of bath salts was on the rise leading up to the 2012 order. According to NIDA, 2010 saw 236 emergency calls to poison control centers related to bath salts. The first two months of 2011 saw more than 250, marking a drastic increase in bath salts-related events. The second half of the year would see more than 3,000 such calls.

Bath salts were once sold legally, skirting laws with labels saying “not for human consumption.”

By the end of 2011, more than 22,000 people in the United States alone had visited the emergency room due to the consumption of bath salts, according to the Substance Abuse and Mental Health Services Administration (SAMHSA). About two-thirds of those visits involved other drugs, showing that polydrug use involving bath salts was not uncommon. More than 3,000 visits involved a combination of bath salts and either marijuana or synthetic marijuana.

Bath salts are not just used by adults, as nearly 1 percent of 8th graders reported to NIDA in 2016 that they had used bath salts in the past year. This approximate number was consistent all the way through 12th grade.

Even after some of the earlier laws dealing with bath salts were enacted, versions of the drug continued to be available throughout the United States legally via similar loopholes. Other synthetic drugs have seen similar legality issues, which can lead to difficulty in enforcement.

To begin treatment for bath salts addiction, the first step is to stop taking the drug. For an individual who is physically dependent on the substance, this will mean withdrawal. Withdrawal occurs when the body no longer receives a substance it craves and is accustomed to receiving. Symptoms of withdrawal may include anxiety, depression, reduced cognitive function, and intense cravings for more bath salts. This process is extremely difficult to undergo alone and without the assistance of medical professionals.

Cravings can become extreme, and it would be a huge challenge for someone to resist such cravings on their own. In severe cases of withdrawal, a person may become delusional and experience hallucinations. It is possible for them to become suicidal as well – yet another reason to seek medical assistance when dealing with bath salts withdrawal. Once withdrawal symptoms subside, an individual can begin therapy. 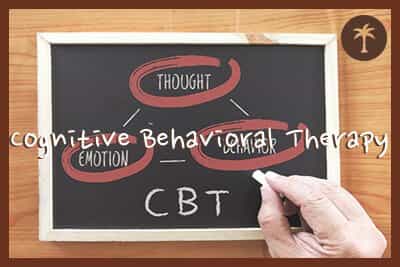 Cognitive Behavioral Therapy (CBT) has proven an effective tool for recovery from bath salts addiction, just as it has with many other addictive substances. CBT is one of the most common forms of therapy due to its effectiveness and the fact that what is learned in CBT stays with an individual long after they finish therapy. This is a big reason for its popularity – the staying power of the tools given to a recovering individual.

CBT focuses on thoughts, feelings, and behaviors and how they interact with one another. CBT asserts that these things are all closely connected, according to U.S. National Library of Medicine. It attempts to crystallize an individual’s thoughts and beliefs and pinpoint which ones are harmful to them. False and distressing beliefs can lead to significant problems, and identifying those beliefs and revealing them as false can greatly assist in recovery. Drawing exaggerated conclusions from false beliefs can cause an excessive amount of stress, which can quickly lead to relapse. This is why defining such beliefs as ones that will negatively affect an individual is a crucial part of the CBT process. If an individual in recovery can take control of their thoughts and beliefs, they are in a better position to control their behavior.

According to CBT, behavior is a learned process and therefore can be unlearned. CBT looks to identify behavioral patterns that have led to problematic situations and drug use in the past. Coping skills for when these patterns arise in the future is a big takeaway from CBT, enabling an addicted person to better deal with such situations.

CBT wants to identify problems that have occurred an in effort to anticipate problems that are likely to arise throughout the recovery process. Preparing the individual in recovery for these problems and giving them the tools to properly cope with them is important. The client must actively take part in the therapy or it won’t be as effective as possible. It requires a close working relationship between client and therapist.

CBT is also useful in the treatment of common symptoms associated with recovery from bath salts. Depression and anxiety are two common issues experienced by those in recovery, and they’re also two things that can easily lead to relapse.

CBT is not the only option for someone recovering from bath salts addiction. Group therapy has proven very useful for individuals in recovery, according to NIDA. Group therapy provides an individual with exposure to others who are struggling with similar problems. Knowing that they are not the only one experiencing such difficulties can help them maintain their abstinence.

Family counseling has also been an effective tool in managing addiction. This type of therapy puts actions and behaviors in perspective in the context of a family. Family therapy can not only help the individual dealing with addiction, but it can also help the family members of that person. Family members may have facilitated substance abuse in the past or been unable to provide the kind of support necessary to maintain sobriety.

Other group settings can be useful as well. Twelve-Step programs are popular sources of support for individuals to maintain their sobriety once they’ve left structured treatment. These peer support programs provide accountability that can often make the difference between recovery and relapse for some people. Such meetings provide a place for participants to vent frustrations or discuss struggles related to their recovery. The steps themselves can help a person accept that their addiction is not something they can control on their own, but with the right support, long-term recovery is possible.

bath salts
Ready to get started?
We're available 24/7 to answer questions and help you make decisions about starting recovery from drug use.
Your Next StepsDon't gamble on your addiction.