It’s not uncommon to see a small band of people smoking outside 12-Step meetings, treatment centers, and other locations designated for treatment purposes. 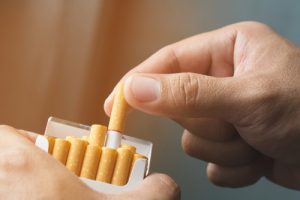 In fact, it’s less common for people not to smoke than to smoke among clients enrolled in rehab, according to a new review published in the journal Addiction. The review of 54 studies  included more than 37,000 participants who were in an addiction treatment program across 20 countries (not including the U.S.). It found that an estimated 31 percent of the general population smokes cigarettes, yet about 84 percent of people in treatment around the world smoke.

In the U.S., researchers noted that about 18 percent of the general population smokes cigarettes as compared to 76 percent of clients enrolled in American drug rehabs, according to a different study. Why does it matter?

Joseph Guydish of the University of California, San Francisco, was the author of the study. In a news release, he said: “When people come into treatment for drugs and alcohol, we are not treating another addiction that has a significant chance of eventually killing them, which is tobacco use. At a public health level, this means that our addiction-treatment efforts should address smoking and tobacco use better than they do now.”

Should rehab programs focus on treating dependence upon nicotine with the same fervor that they address drug and alcohol use and abuse?

Tobacco use is deadly; no one refutes that. Yet millions of people continue to use tobacco products with no intention of quitting, despite the many studies that prove that use of tobacco can contribute to a range of cancers, including cancer of the nose, mouth, throat, and lungs, as well as other chronic and deadly diseases. It would make sense to help clients who are interested in quitting smoking to take steps to do that during drug rehab. If it is not a current goal of the client, should it be required as it is often required that clients in recovery seek simultaneous treatment for drug dependence?

Not necessarily. There are a number of behaviors that humans engage in regularly that can potentially contribute to deadly disorders. Sugar and trans fats found in fried foods are both toxic substances, and too much of either can contribute to inflammation and obesity, which in turn can lead to a range of chronic and deadly ailments. But no one is suggesting that all who enter treatment be required to manage their diets to the degree that they never eat a French fry or donut.

Though it may be a great choice for clients to enroll in programs that, as a general rule, extend their parameters to the point that they are attempting to help clients overcome every single behavior that could contribute to death and health problems rather than just focusing on addiction and co-occurring mental health issues, it may not be a plausible option given the cost, time, and intensity required. Though some attention paid to these issues may be beneficial, to require a complete cessation of all unhealthy behaviors may stop clients who are in desperate need of addiction treatment from seeking the treatment they need to address the primary issue in front of them: drug and alcohol addiction.

Can Quitting Smoking Improve the Ability to Stay Sober?

There are some experts who believe that a strong focus on the cessation of cigarette use during drug rehab where the client is heavily supported by therapists, a medical team, and peers will improve the outcome of long-term sobriety after the transition back into independent living. It makes sense that improving overall health and wellness – which quitting smoking will certainly do – will also improve the ability to use positive coping mechanisms to manage stress, feel better in general, get better sleep, and be more capable of avoiding relapse when experiencing cravings.

Guydish says: “Every person who enters substance abuse treatment ought to have their tobacco use evaluated and treated. If they don’t want to be treated and quit right away, they should have some education to help them think more about quitting. There are data from a number of studies which strongly suggest that you can improve substance treatment outcomes by addressing smoking among the patients in treatment. That’s what we should be doing.”