What Are the Long-Term Risks of Morphine Abuse? 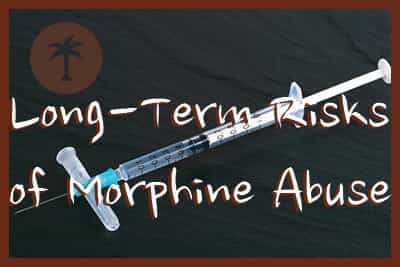 Morphine was the first synthetic opioid, derived from opium in the 19th century. The drug is still widely used all over the world to manage pain, but early in its use, it was also found to be very addictive. Because so many people began abusing morphine after it became a widespread pain treatment, medical researchers went on to develop heroin (also a prescription pain medication until it was found to be more addictive than morphine), oxycodone, hydrocodone, methadone, and many other synthetic opioid drugs.

This original synthetic painkiller is considered a Schedule II drug, according to the Drug Enforcement Administration (DEA) because it is important to keep it available for pain management, but it is still a risky drug that has caused many people to struggle with addiction. Per the Centers for Disease Control and Prevention (CDC), 91 people die in the United States every day from an opioid overdose, including morphine overdoses. In addition to overdose, morphine can lead to several long-term health issues if it is abused.

Side Effects from Abusing Morphine

Like other opioid drugs, morphine can cause side effects because it is a potent substance. This is even true for people who take morphine as a prescription medication with a doctor’s oversight. People who abuse morphine are more likely to experience negative side effects from taking too much of this substance. Common side effects include:

For people who take morphine as prescribed, these symptoms should go away; if they do not, speak with the prescribing physician. Unfortunately, people who struggle with morphine addiction or abuse are not likely to stop. They are also unlikely to report these symptoms to a medical professional, so they may progress into more serious, chronic health problems.

If a person is overdosing on an opioid drug, including morphine, call 911 immediately. They need emergency medical attention.

Morphine can lead to an overdose when taken alongside other opioids, benzodiazepines, or alcohol, which are also depressant drugs; also, if a person abuses morphine and takes too much, they are at risk of experiencing an overdose. Signs of a morphine overdose include:

Although thousands of people die from opioid overdoses every year, one report found that three out of four people who overdose on opioids survive. Unfortunately, many do not seek medical attention for the effects of overdose. This can lead to frostbite, loss of limb from constricted blood flow when passed out for hours, nerve damage, brain damage from oxygen deprivation, damage to the liver, and damage to the kidneys.

Dependence, Tolerance, and Addiction to Morphine

The biggest risk from abusing large doses of morphine for a long time is addiction. Compulsive behaviors make it difficult to moderate or stop taking the substance; changes to the brain’s reward center reinforce these behaviors; and physical dependence on the drug forms. Depending on opioids like morphine means the brain needs the substance to regulate neurotransmitters, which affect mood; without the presence of morphine in the brain, the person will feel depressed, exhausted, and anxious. Additionally, taking a lot of morphine for a long time means the body will develop a tolerance to the presence of the chemical, so the person will feel they need to take more to achieve the original effects; this puts them at greater risk of overdose.

Abusing morphine for a long time, especially taking a lot of the drug, can lead to serious physical harm and chronic health issues. Damage can include:

It is important to get help overcoming opioid addiction, so these issues can heal. Chronic issues associated with morphine abuse can be deadly, as can overdosing on opioid drugs. Fortunately, evidence-based detox and rehabilitation programs are readily available; these programs help individuals end their physical dependence on morphine, with medical oversight, and then change behaviors around these and other intoxicating substances.