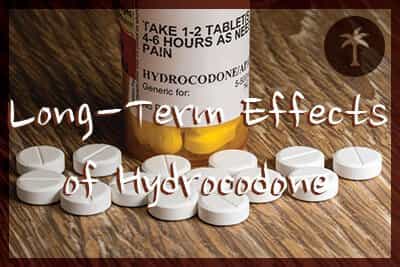 Hydrocodone is a prescription opioid painkiller, which is listed as a Schedule II drug by the Drug Enforcement Administration (DEA). Many drugs in the Schedule II category are opioid medications because they have an important medical use to treat serious pain, but they are also very addictive. Like some other prescription opioids, hydrocodone is derived from morphine, which is synthesized from opium.

As with other prescription painkillers derived from morphine, hydrocodone can be addictive. While most people safely take hydrocodone to treat pain from injury or postsurgical pain, many have abused their prescription or stolen it specifically to get high. The Centers for Disease Control and Prevention (CDC) found that there were 91 overdose deaths in the United States every day in 2015 due to opioid abuse, and hydrocodone abuse contributes to this problem.

This opioid drug can cause serious side effects, including constipation, changes in appetite, excessive sleepiness or drowsiness, headaches, intoxication, and dependence. While a few side effects may occur when hydrocodone is taken as prescribed, these are more likely to begin if the drug is abused. If side effects are ignored due to addiction, they will worsen over time. People who struggle with hydrocodone abuse are at risk of suffering chronic illnesses.

Mental and Behavioral Damage from Hydrocodone

Mental and emotional harm caused by long-term hydrocodone abuse may include:

According to the National Institute on Drug Abuse (NIDA), about 1.9 million people in the US struggled with opioid addiction, including addiction to hydrocodone, in 2014. Since then, that number has grown, and many people now struggle with heroin or fentanyl abuse. Over 80 percent of those who now struggle with heroin addiction began abusing prescription opioids like oxycodone or hydrocodone. They may already suffer from chronic health problems, which will get worse with time.

Taking hydrocodone as directed can reduce the risk of dependence and withdrawal symptoms; it also means that one can receive immediate care for side effects, like constipation or nausea, to reduce the risk of chronic health problems. However, people who struggle with addiction are more likely to develop serious problems over the long-term.

Fortunately, medications like buprenorphine can be prescribed to ease the body off opioid dependence and end hydrocodone abuse. Professional help from addiction specialists to safely detox and change one’s behaviors around intoxicating drugs like opioids can reduce or reverse chronic health problems related to such abuse.