How Long Does Heroin Stay in Your System?

Heroin is a very addictive opioid drug and a chemical derivative of morphine. It is commonly injected, snorted, and smoked.1

Heroin is a relatively short-acting opioid, and the substance itself (i.e., diacetylmorphine) does not stay in a person’s system for very long. However, in processing the drug, the body breaks it down into different metabolites, which can remain in the body for longer.

However, it can be detected for up to 3 months on a hair test. Various factors can affect how long the drug will be present in someone’s system, including individual differences in rates of drug metabolism, amount of the drug used recently, a history of long-term use, hydration status, and urine pH.

How Long Will Heroin Show Up on a Drug Test? 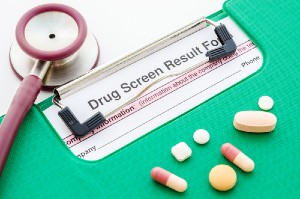 Rough estimates for the amount of time heroin or its metabolites will show up on a drug test after last use are as follows:

When heroin is ingested, the body metabolizes it fairly quickly. Its half-life is about 3 minutes, which means that after less than 10 minutes, metabolic processing clears as much as 50% of the heroin first introduced to the body. Some other sources cite the half-life of heroin at closer to 15-30 minutes.2,3

Even though heroin itself may be processed relatively quickly, several metabolite substances can remain for a longer period of time. Heroin is metabolized to 6-monoacetlymorphine (6-MAM) and then into morphine.2 Labs may screen for 6-MAM and morphine during a urinalysis.

Does the Administration Method Affect How Long Heroin Stays in Your System?

Not really. While the method of use (e.g., snorting or injecting) can affect how quickly heroin affects the brain,7 studies have found that, once in your system, the half-life of the drug is generally the same regardless of how the drug is taken.8

Despite the slight variability in terms of transit to the brain and, consequently, onset of drug effects, the method of administration does not affect the absolute rate of drug clearance nor does it exert a significant influence on how long the drug will remain in someone’s body.

What Other Factors Determine How Long Heroin Stays in Your System?

Drug purity is often cited as a factor that contributes to overdose risk; however, Dr. Shane Darke of the National Drug & Alcohol Research Centre in Australia argues that purity and impurities are not the cause of death in the majority of heroin overdose fatalities. After studying research from the past 40 years, he concludes that most deaths are due to polydrug abuse, particularly heroin combined with alcohol and benzodiazepines, which can cause someone to stop breathing.9

In more recent years, fentanyl mixed with or substituted for and then unwittingly consumed as heroin has become another common cause of drug overdose deaths in the U.S.

Are There Other Conditions or Circumstances That Might Make Heroin Take Longer to Metabolize?

Other factors that can affect how long heroin will remain in the body and show up on a drug test include:10,11

People who are dependent on heroin and stop using will usually experience withdrawal symptoms as their body adjusts to the lack of the presence of the drug.12 The acute heroin withdrawal syndrome is often described as flu-like. Symptoms of withdrawal might include:13

Most heroin users experience withdrawal symptoms within 6-12 hours after their last dose. On average, symptoms peak at 1-3 days and begin to fade after 5-7 days. This timeline may closely resemble that associated with more short-acting prescription opioids such as Vicodin or morphine, but not longer-acting opioids such as methadone or extended-release formulations such as OxyContin. For longer-acting medications, withdrawal symptoms may not develop for 12-48 hours and last for 10-20 days.13,14

The character and severity of withdrawal can be affected by many of the same factors that influence how long a drug stays in your body, such as length of use and amount used. Other factors include age, health, and use of other drugs.

As with other opioids, heroin withdrawal is rarely life-threatening. But it can be quite uncomfortable. Medical detox programs, such as those offered at the start of many inpatient and outpatient rehab programs, can help users navigate their withdrawal safely and with minimal discomfort. These programs provide support, supervision, and are able and prescribe treatment medications (e.g., methadone, buprenorphine, Suboxone) to stabilize someone in withdrawal, decrease cravings, and help people to maintain their recovery momentum throughout the duration of treatment for heroin addiction and beyond.

It is dangerous to abuse heroin regardless of how the drug is ingested or how often. Not only is the drug highly addictive, but there is a an ever-present risk of overdose and death, even for chronic users with significant opioid tolerance. The risks may be even more pronounced in this day and age when fentanyl and its analogue substances are being detected as heroin adulterants with increasing regularity.

People can and do recover from heroin addiction. Evidence-based treatments involve medication and behavioral therapies. In rehab programs, people learn how to change the way they think about drugs and deal with other problems that may drive them to use. For those who cannot afford or are not able to attend treatment programs, 12-step groups are free to attend, and meetings are hosted in most communities.

If you’re tired of dealing with the cycle of addiction, research your treatment option—find a program that will work for you or your loved one. Call us today at to learn more about our comprehensive drug rehab program in Las Vegas, NV, at Desert Hope.

heroinopiate
Prefer getting help via text?
We're available 24/7 via text message. Signup below for access to our team when its convenient for you!
and many more...
Your Next StepsDon't gamble on your addiction.