Physical Impact of Ecstasy Abuse: Dangers of Use

Ecstasy is just one of the names associated with 3,4-Methylenedioxymethamphetamine, or MDMA. This amphetamine-based drug is a potent stimulant with psychedelic properties. Although ecstasy is now a Schedule I drug in the United States, and tightly controlled in many other countries, the substance was initially developed for clinical use in a variety of applications, including psychiatry.

MDMA was originally developed in 1913 by pharmaceutical manufacturer Merck & Co. It was designed to be an appetite suppressant, although it did not receive approval for this use. In the 1950s, psychologists began experimenting with ecstasy, using small doses of the substance to improve levels of trust between patient and doctor. In the 1970s, MDMA was prescribed to several psychiatric patients to help them relax and speak more easily with their therapists.

MDMA was eventually diverted for nonmedical abuse, and it became a popular drug at nightclubs, raves, concerts, and large parties in the 1980s. The International Convention on Psychotropic Substances banned the drug internationally in 1985, and the Drug Enforcement Administration (DEA) placed ecstasy on the Schedule I list under the Controlled Substances Act (CSA) in 1988.

Since ecstasy no longer has a recognized medical use, according to the federal government, it is predominantly abused for recreational reasons. The drug is both a stimulant (reducing the need for sleep, and improving energy and sociability) and a hallucinogen. When a person takes ecstasy, they seek intoxicating effects like:

However, because the drug has a chemical structure like that of methamphetamine, there are also negative side effects. Physical and mental side effects associated with ecstasy include:

At the end of the social event, when the person stops taking ecstasy, they may experience an intense comedown, or “crash.” Depression, physical exhaustion, soreness, hunger, and other side effects can dramatically impact the person for one or two days after they take ecstasy. This may lead them to crave more of the drug, especially to combat depression. Long-term, abusing MDMA can lead to serious mental health effects due to brain damage. Changes in mood and behavior may become permanent.

Taking too much ecstasy can lead to acute problems like severe dehydration, heart failure, muscle breakdown, and kidney failure, due to high blood pressure and dangerously high body temperature. Additionally, abusing ecstasy in enormous quantities for many years can lead to chronic health problems. 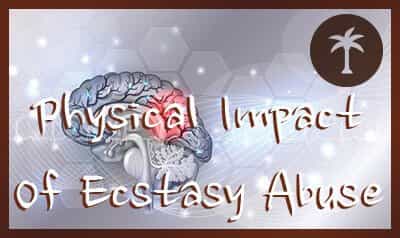 People who attend multiday parties may consume a lot of ecstasy over a period of 24-72 hours, without sleeping, and barely eating or drinking. This can lead to dehydration and severe exhaustion.

Because ecstasy leads to an increase in neurotransmitters in the brain for several hours, abusing this drug repeatedly will change the structure of the brain over time. Brain scans of people who abused ecstasy for years reveal that there is decreased activity in several important areas, including the prefrontal cortex, parietal lobe, mediotemporal cortices, amygdala, cingulate, and hippocampus. These areas all involve cognitive and rational thinking, emotional regulation, learning, and memory.

Some changes in brain chemistry due to MDMA abuse suggest that serotonin neurons have been damaged, and it is unclear if this change is permanent if the person stops abusing the drug. This damage would impair how the brain releases and processes serotonin, which could cause a mood disorder like depression.

Heart disease has been associated with long-term abuse of ecstasy.

Consistently high blood pressure and high body temperature, combined with increased risk of dehydration, exhaustion, anxiety, depression, and malnutrition from the drug’s side effects and comedown effects, put a lot of stress on the heart, leading to damage.

Ecstasy increases pleasure from physical touch, so some people have abused the drug to increase sexual arousal and excitement. However, because the drug also lowers inhibitions and increases sociability, this could lead to risky sexual behaviors, increasing the risk of contracting a sexually transmitted infection (STI).

People who abuse MDMA at social events like raves or concerts may not always take Molly or ecstasy. Since the 1990s, concerns about the purity, and therefore the safety, of MDMA have repeatedly come up. One study found that only about 13 percent of ecstasy seized by law enforcement, between 20009 and 2013 in New York, contained any MDMA. While taking ecstasy is unsafe, taking another drug assuming it is ecstasy is even riskier, as it can lead to unexpected side effects and may be dosed improperly, prompting overdose on an unknown drug.

It is possible to overdose on MDMA. If a person overdoses on ecstasy, call 911 immediately. The person needs emergency medical attention to survive.

The most common sign of overdose on ecstasy is fever and very high body temperature. If a person’s core body temperature reaches over 108 degrees Fahrenheit, they will do lasting harm to their internal organs, especially the heart, kidneys, and liver. If body temperature gets too high, sudden death can occur from heart failure.

If you or someone you love is struggling with the devastating side effects of addiction and are unsure of where to turn, call us today at . Desert Hope, American Addiction Centers’ drug rehab facility in Las Vegas, is ready to help you get the treatment you need today.

hallucinogens
Prefer getting help via text?
We're available 24/7 via text message. Signup below for access to our team when its convenient for you!
and many more...
Your Next StepsDon't gamble on your addiction.