What Are the Signs of Abuse for Ketamine? 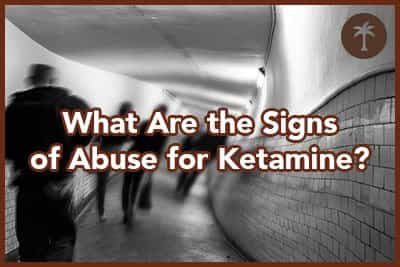 Ketamine was developed as an anesthetic in 1962 with the intention of working rapidly to induce unconsciousness in people going into surgery. Although it is very effective for this purpose, it has fallen out of favor due to side effects, like panic or anxiety, associated with its use. Unfortunately, this dissociative anesthetic has properties like PCP or dextromethorphan (DXM), so it has become a substance of abuse. While it is listed by the Drug Enforcement Administration (DEA) as a Schedule III substance, meaning it is tightly regulated but still important in both human and veterinary medicine, it can also produce euphoria and hallucinations, which make it an appealing drug of abuse for some people, especially those who abuse other psychedelic drugs, including in club settings.

Since it is not typically used for surgical purposes, ketamine is most often diverted from veterinary supplies and illicitly distributed. The drug is also mislabeled and solid illicitly as MDMA or ecstasy, PCP, amphetamines, cocaine, or other drugs commonly abused in large social situations. Ketamine is typically considered a “club drug,” abused in social settings like raves or concerts, although very recently, it has been reintroduced into medical and therapeutic settings as a potential treatment for depression. Still, using the drug this way has not been officially approved by the Food and Drug Administration (FDA), and there are few medical studies to back up the anecdotal results. Ketamine is still potentially addictive and therefore risky.

Since ketamine was designed to act rapidly as a form of sedation and anesthesia, the injectable version takes between one and five minutes to act on the brain; however, in social settings, ketamine is typically taken either orally or via the nose, meaning it is swallowed or sniffed. Snorted ketamine takes 5-15 minutes to become bioavailable while oral consumption takes 5-30 minutes. The drug lasts one hour at most, so the high wears off quickly; however, physical coordination, sensory perception, and judgment are all impacted for up to 24 hours after ketamine is abused.

Specific effects and side effects of ketamine, which may indicate abuse, are dependent on the size of the dose.

A person high on ketamine may have a sense of floating out of their body, feel dissociated from stimuli, and experience hallucinations. Doses larger than two mg per kilogram of body weight can produce a physical effect called the K-hole, which is close to full-body sedation. People who have experienced this effect report numbness throughout their body, muscle weakness, and vision changes.

The majority of ketamine’s effects are mainly psychological until one reaches a dose large enough for overdose. If someone near you appears to be overdosing on any drug, including ketamine, they need emergency medical attention, so call 911 immediately.

The helpless, confused, and uncoordinated state that occurs in people who abuse ketamine puts them in extreme danger. Even at lower doses, people who are hallucinating or feeling dissociated from their bodies are at risk of stumbling, falling, and severely hurting themselves. They may make bad decisions, like driving while high, or they may become a victim of a crime. Other physical signs that a person is high on ketamine are like those of other drugs, but may include:

Repeated abuse of ketamine can damage internal organs, including the bladder, kidneys, and stomach. It can cause memory loss, although many drugs can lead to blackouts, amnesia, or memory loss. One long-term, chronic health problem closely associated with ketamine abuse is ulcerative cystitis, or ulcers in the bladder.

It is important to get help detoxing from ketamine. Although withdrawal symptoms associated with ketamine abuse are largely anecdotal, a person may experience intense cravings, anxiety, insomnia, and flashbacks. Without medical oversight, there is a high risk that the person will relapse back into ketamine abuse, which will most likely cause an overdose. This could be deadly.

While there are physical signs that someone is high on ketamine, most of the effects are psychological. Low recreational doses produce intense dissociation, euphoria, and hallucinations lasting about one hour. The person may report feeling like they are floating, feeling stimulated, seeing auras, or seeing or hearing things that are not there. Higher ketamine doses may produce effects like:

Abusing a lot of ketamine can induce psychosis, which may be treatable in an inpatient medical setting but may not go away. Learning and memory may also be impacted long-term.

Call now for a FREE insurance and payment consultation.
Contact Us Today

Ketamine Is a High-Risk Drug, so Get Help

People who abuse ketamine may compulsively seek the numbness, dissociation, and high associated with the drug. However, the body quickly develops a tolerance to ketamine, so after a short period of time, a person who consistently abuses this anesthetic may be able to take very large doses without feeling any effects. The body also quickly becomes dependent on the presence of the drug to feel relaxed, happy, or normal.

Because ketamine may be useful in treating depression, and because it is still legal to use as a tranquilizer and anesthetic for surgery, the substance is increasingly being investigated for new off-label uses. However, this means that ketamine may be more available for theft and diversion, much like opioid drugs.

Some studies show that occasional ketamine abuse, followed by evidence-based addiction treatment to overcome substance abuse, does not cause lasting damage to the brain or body. However, frequent and long-term ketamine abuse can lead to bladder, kidney, and stomach damage, and it may trigger mild delusions that do not go away.

It is important to find evidence-based treatment to safely detox from ketamine and get therapy to change behaviors around intoxicating substances.