US Cities with the Highest Number of Homeless Veterans

One of the most tragic aspects of war is the toll it takes on the people who risk their lives to protect our country. In an appalling number of cases, soldiers return home suffering from Post-Traumatic Stress Disorder, addiction, and a host of other repercussions that they carry with them as a result of combat. In far too many of these cases, these heroes do not receive the help they need to combat the emotional repercussions of their service. One far too common end result? They end up homeless on the streets they devoted their lives to protecting.

This study examines the highest occurrence of veteran homelessness throughout the 50 largest cities in the United States. Based on estimates by the HUD Exchange, we have identified which cities have the highest number of homeless veterans. Our findings are below. 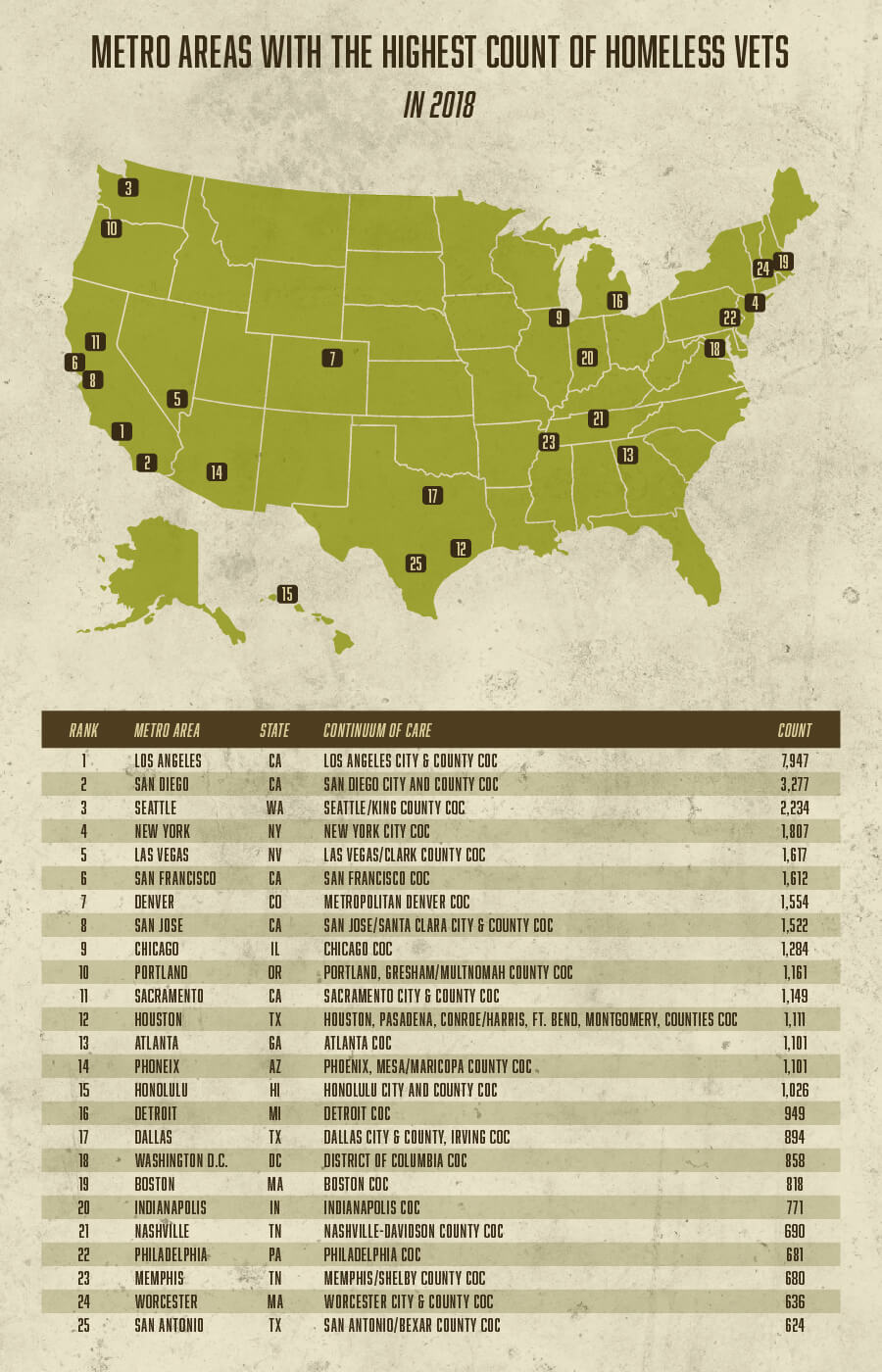 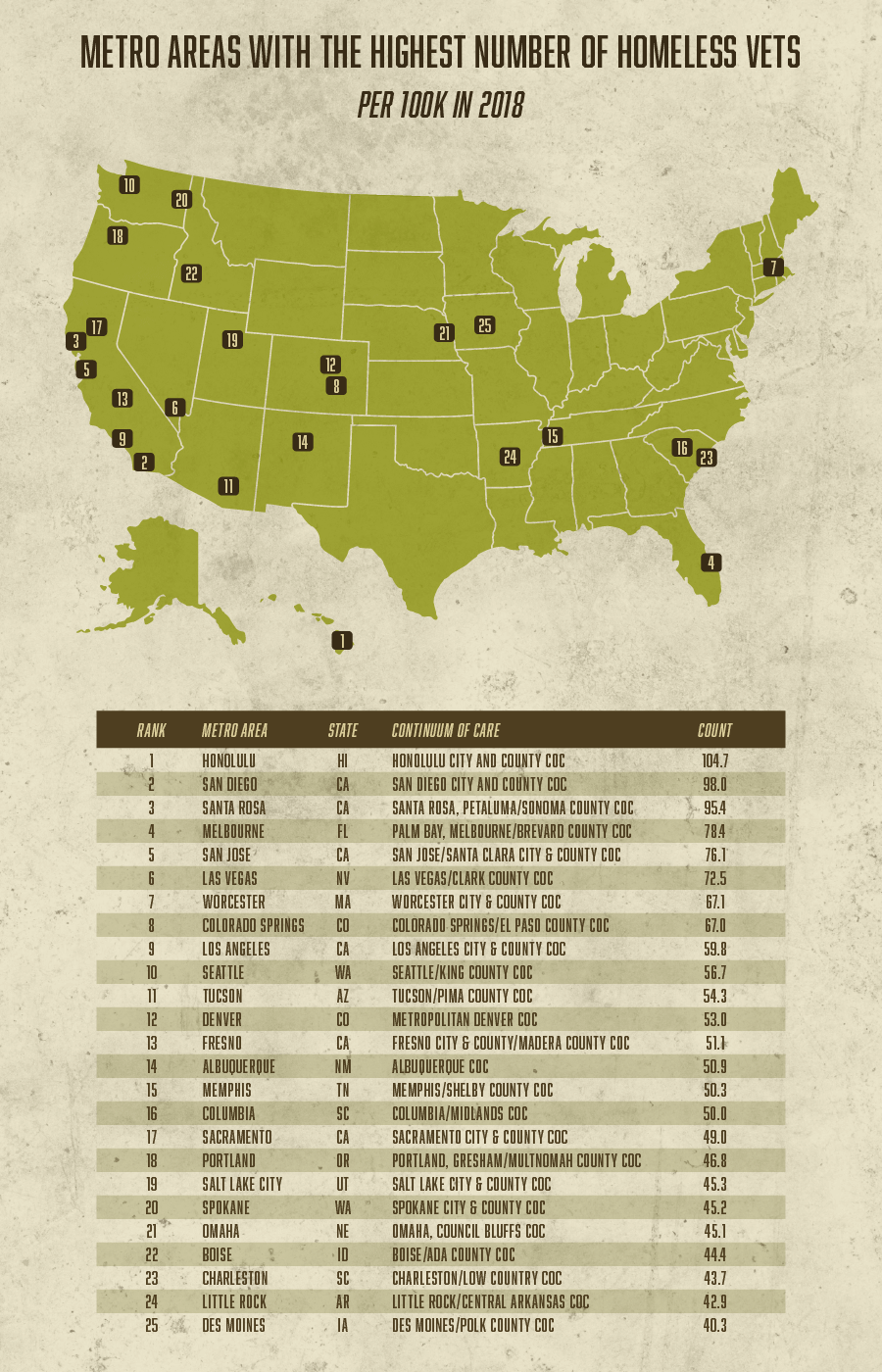 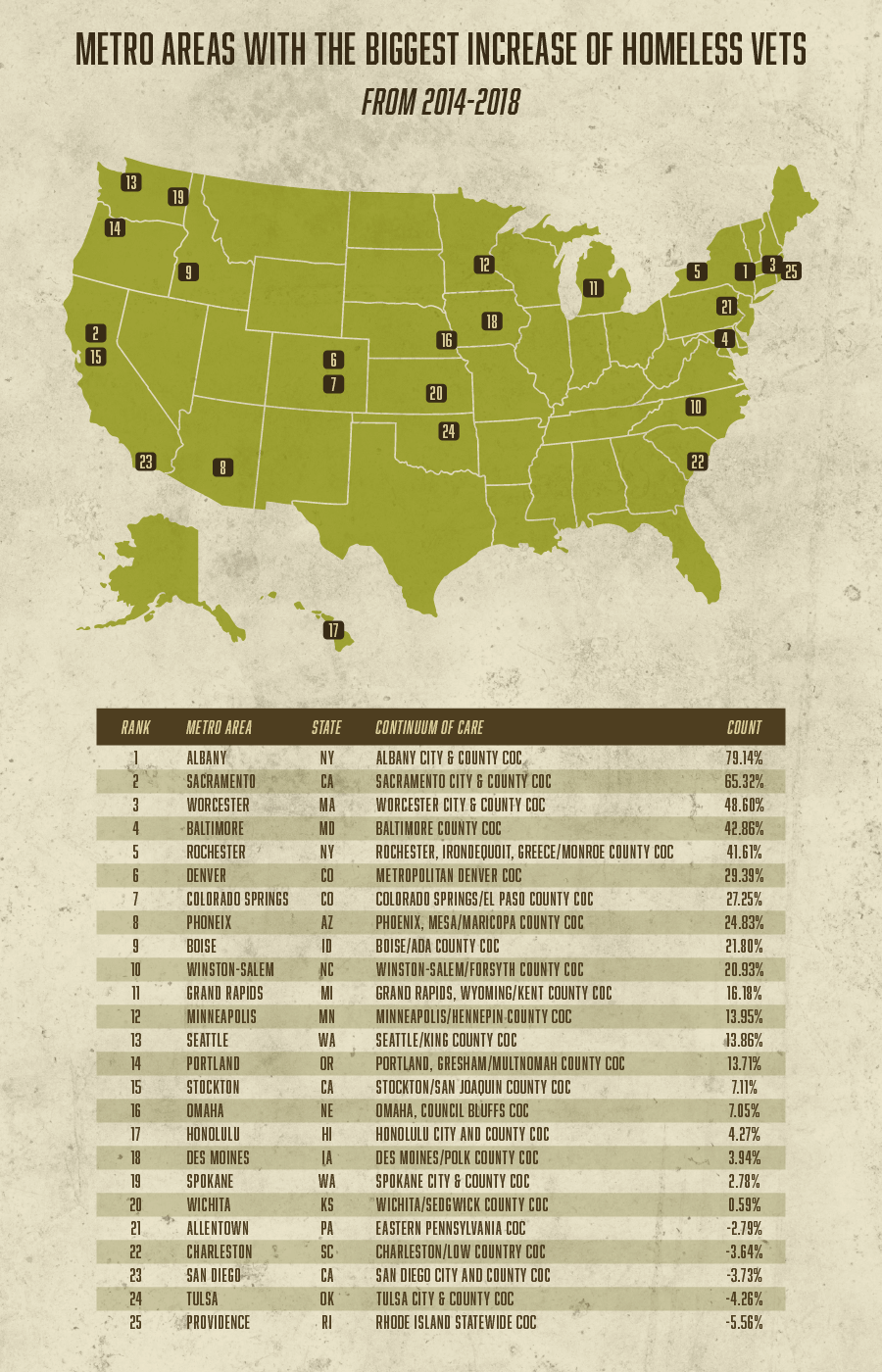 Looking at the year-over-year changes in the number of homeless veterans in each city, the city with the highest percentage increase was Albany, NY by far. Their homeless veteran population grew by nearly 80% over 5 years, almost 15% more than Sacramento, which came in second place. Worcester, Baltimore, and Rochester round out the top 5 cities with the highest growth in homeless vets over 5 years and are the last cities to have a growth rate of over 40%.

On the other end of the scale, there are cities with remarkably few homeless veterans. Provo-Orem, UT has just 12 homeless veterans according to our source. Youngstown, OH follows with just 34, followed by Fort Myers and St. Louis, both of which have counts of under 50. 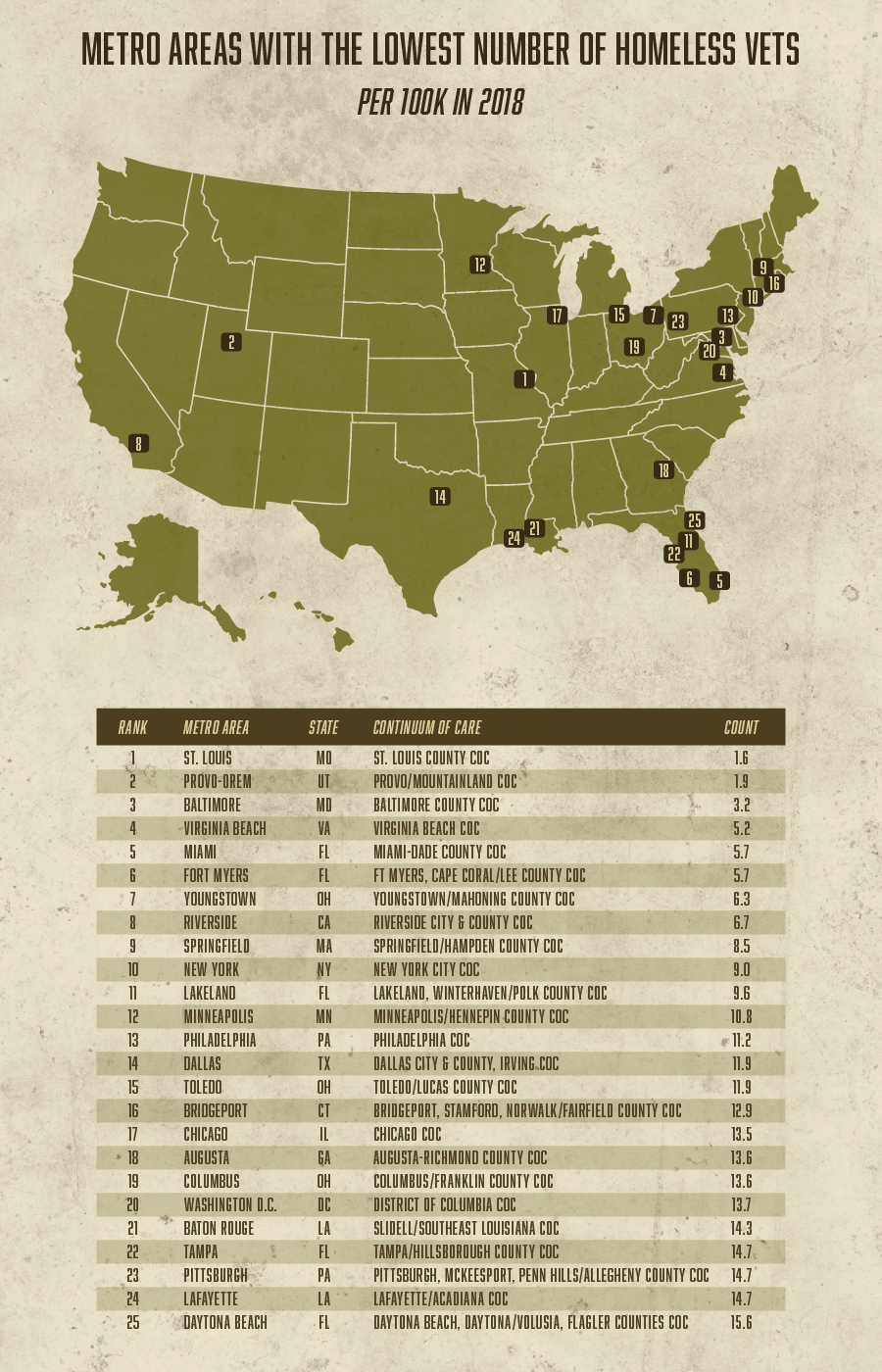 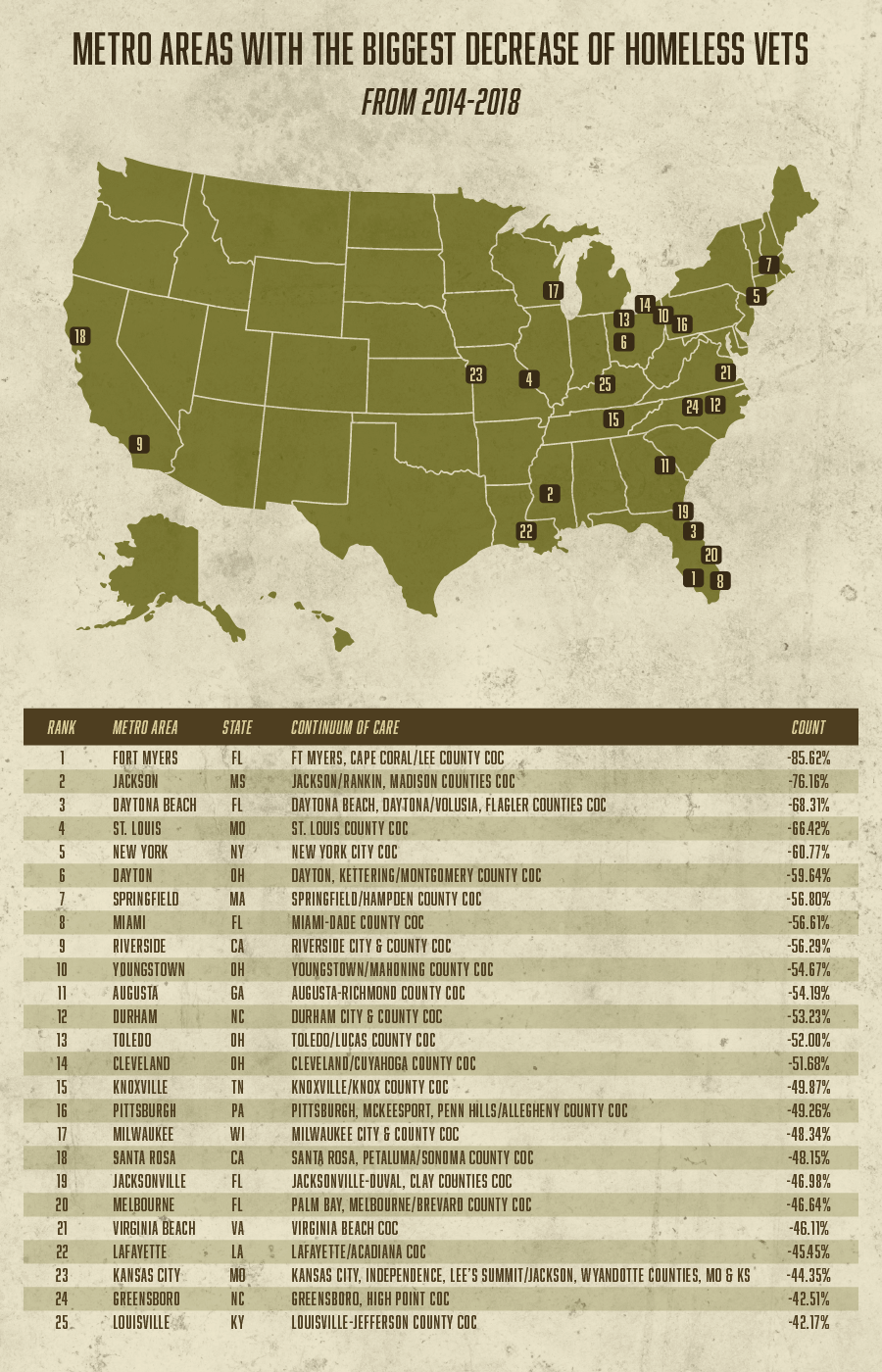 Although homelessness among American veterans is a huge problem, there are areas where the number of homeless veterans has decreased over the past 5 years. Fort Myers is the best example of this, with an overall decrease of 85%. Jackson is close behind with a decrease of 76%, followed by Daytona Beach, St. Louis, and New York, all of which have decreased homeless veterans rates by over 60%.

The fact that any American soldier is left homeless after their service is a tragedy beyond words. There are a variety of reasons that veterans are at high risk for homelessness, but the fact that post-traumatic stress is often accompanied by substance abuse issues is certainly a factor. If you know a veteran who is struggling with addiction, you can find resources to help their unique case here.