An Overview on Synthetic Hallucinogens 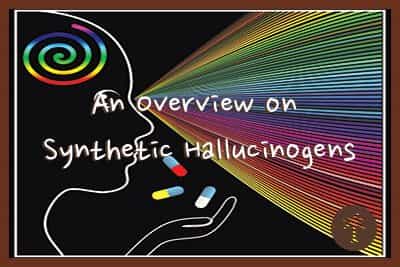 The abuse rates of synthetic hallucinogens are difficult to pin down, according to the DEA, but the 2013 National Survey on Drug Use and Health found that more than 200,000 people in the United States (12 years and older) reported using a hallucinogenic substance in the past month.

Hallucinogens affect the brain by interfering with serotonin, according to the National Institute on Drug Abuse (NIDA). Serotonin regulates a person’s mood, so changes in mood are common among hallucinogen users. Sensory perception is often altered as well as a result of the drug’s effect on serotonin. Serotonin also regulates muscle control and body temperature, so fluctuations of both can occur while under the influence of a hallucinogen. Sexual behavior and hunger may also be affected.

The effects of hallucinogens can take hold within a half-hour and last many hours in certain cases. Intensity of the effects usually vary upon dose, according to the Drug Enforcement Administration (DEA). Common short-term effects include:

Some hallucinogens may bring on other symptoms in the short-term, such as:

Long-term effects with continued use can be dire. Kidney problems, bladder issues, and memory impairment are possible. Though it is rare, some people develop hallucinogen persisting perception disorder (HPPD). HPPD includes visual disturbances even when an individual is not under the influence of a hallucinogen. Some people refer to instances of this condition as “flashbacks.” Depression is another long-term effect associated with synthetic hallucinogen use.

Some symptoms of synthetic hallucinogen abuse are:

According to NIDA, some hallucinogens, particularly synthetic versions, can be addictive. Prolonged use may result in serious physical dependence, and withdrawal will then occur when a physically dependent person stops taking the drugs. Such individuals can become paranoid and even psychotic. It is not uncommon for a person going through synthetic hallucinogen withdrawal to experience bouts with extreme panic, and they may even begin to exhibit suicidal thinking and/or behavior.

It’s important that detox is done in a medical facility where clients can be consistently monitored by professionals. This ensures the safety of all involved and increases the likelihood that individuals will make it through detox without relapsing back to substance abuse. 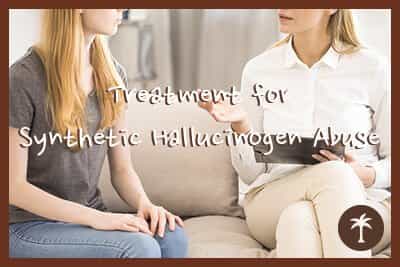 According to NIDA, there are currently no medications available to aid in the treatment of hallucinogen addiction. More research is needed on the matter to develop treatment strategies, but NIDA asserts that behavioral therapies can be helpful.

One of the most prevalent forms of therapy in treating substance abuse and addiction is Cognitive Behavioral Therapy (CBT), and this form of therapy can be effective in treating addiction to synthetic hallucinogens. CBT has been lauded for its ability to give individuals struggling with addiction tools to cope with their addiction that will sustain them into ongoing recovery.

CBT looks to define the connections and relationships between an individual’s feelings, thoughts and behaviors. These three factors are often connected in how they affect an individual’s abuse of drugs. Negative thoughts and feelings can result in stress, which is one of the major triggers for drug use. Drugs are used by many to cope with stress and anxiety. CBT aims to teach an individual new coping mechanisms and attempts to help them anticipate problems that may arise in the future while providing them with realistic solutions. As a result, CBT has seen a lot of success in treating substance abuse.

One specific type of Cognitive Behavioral Therapy is Dialectical Behavior Therapy (DBT). Originally developed to help suicidal individuals who had been diagnosed with borderline personality disorder, DBT has become an accepted and championed form of therapy for a variety of issues, substance abuse included. DBT can feature a multitude of different settings in which an individual participates in therapy. They may partake in DBT in a group setting to learn new skills, individual therapy to increase their motivation, or therapy with multiple therapists in severe cases.

DBT teaches people to be more mindful and aware of their current surroundings, and the ability to tolerate difficult situations is a key component of this therapy. Being able to regulate one’s emotions is also something commonly taught in DBT. All of these things can be effective tools in the pursuit of long-term recovery.

In many cases, complementary or alternative therapies can be useful. Complementary therapies can feature a variety of activities that are considered to be good for the wellbeing of an individual recovering from addiction. Yoga, meditation, homeopathy, and other holistic pursuits can boost the mental and physical wellness of a person and help them develop new, productive habits going forward. While these therapies shouldn’t be the primary method of care, they can complement a traditional, evidence-based treatment plan.

hallucinogens
Ready to get started?
We're available 24/7 to answer questions and help you make decisions about starting recovery from drug use.
Your Next StepsDon't gamble on your addiction.