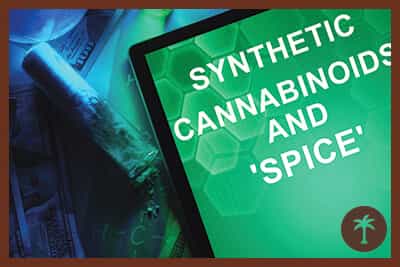 Synthetic cannabinoids are sometimes referred to as synthetic marijuana, but this nickname is misleading and has led to the marketing of the drug as a safe alternative to marijuana. The reason for the association between K2 and marijuana is that synthetic cannabinoids produce a similar effect to THC, the active ingredient found in marijuana. K2 binds to the same receptors in the brain that THC does; however, K2 is much more dangerous.

K2 does somewhat resemble marijuana in appearance due to the product being sprayed onto a plant, though it also resembles potpourri, according to the Drug Enforcement Administration (DEA). K2 is usually ingested by smoking the substance in a pipe or a rolled joint. Some users have been known to make a tea from it as well. More recently, people have been vaporizing the drug in a similar fashion to how electronic cigarettes are used.

According to NIDA, K2 and other synthetic cannabinoids affect the brain much more potently than marijuana, and the effects are far more unpredictable. The effects can vary greatly from batch to batch, as synthetic cannabinoids are produced in diverse ways using different chemicals. This makes the specific effects of the drug very inconsistent. Common effects of K2 include:

However, users of K2 and other synthetic cannabinoids have also reported psychotic effects, such as:

Legality of Spice and K2

There has been quite a bit of controversy surrounding the legality of K2 and other synthetic cannabinoids since they started to become popular. Initially, products were sold over the counter at establishments like gas stations and head shops with labels indicating that they were “not for human consumption,” but this was more an exploitation of a legal loophole than anything else.

Labels also indicated that the products contained natural material, but this was misleading, as the only natural material was the plants that the active substance was sprayed onto. The mind-altering effects experienced by users was a byproduct of the synthetic substance alone, as the plant material played no role in that regard. The once-easy access to the drug likely played a role in people regarding it as safe for consumption, even though this was not the case.

The DEA executed an emergency order to classify a multitude of chemicals commonly found in synthetic cannabinoids as Schedule I substances in 2010, though the order was temporary. March 2011 saw the organization publish a final and permanent order to place five different synthetic cannabinoids under Schedule I. This was done in an effort to avoid an imminent hazard to public safety. 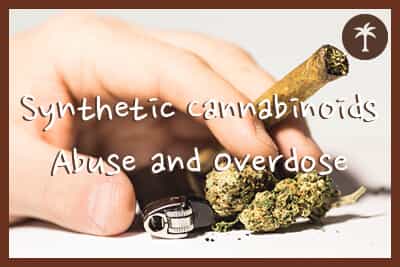 K2 seems to be a rather popular drug among young people. A 2016 survey found that nearly 3 percent of 8th graders reported using the drug within the past year. The rate of use appeared to increase with age, as more than 3 percent of high school seniors reported using K2 in the last year in the same survey, according to NIDA.

Overdose on the substance is possible, and New York City saw more than 130 overdoses in a single week in 2016. An individual who has overdosed on a synthetic cannabinoid may experience seizures, which can be extremely dangerous and cause long-lasting health issues. Vomiting is not uncommon among those who have overdosed on the drug, and some may even slip into unconsciousness or a coma.

An increase in heart rate and/or blood pressure may occur as a result of taking too much K2, and either of these effects can have dramatic long-term health consequences. Crippling headaches are also a symptom of K2 overdose, as is losing the ability to speak. Violent paranoia and physical responses to that paranoia may also come about, putting those around the individual at risk for harm.

Some effects of K2 can cause permanent damage to the body, especially in the cases of rapid heart rate and high blood pressure.

Synthetic cannabinoids can be addictive, and long-term users have been known to develop physical dependence on the drug. Physical dependence can make the recovery process very difficult to begin, as the body craves the substance and has difficulty functioning without it. Abruptly removing the drug from the system can induce withdrawal symptoms, which can include:

Intense cravings for the drug usually accompany withdrawal, as the body yearns for the substance in order to regulate itself. This makes withdrawal a challenging process, so professional help is recommended. An individual should not attempt to detox from K2 on their own, as their best chance for success comes in a designated facility where they can be monitored and cared for by medical staff members. 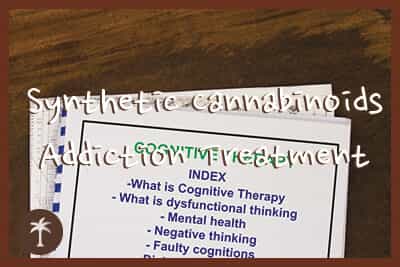 After withdrawal symptoms subside, therapy can begin, although therapy begins during the withdrawal process in some instances. Some users who have been addicted to other substances in their lifetimes have said that K2 was more difficult to quit than any other substances, including highly addictive drugs like heroin and meth.

One of the most successful kinds of treatment for substance addiction is Cognitive Behavioral Therapy (CBT). CBT maintains that there is a significant connection between an individual’s thoughts, feelings, and behaviors. They are all interconnected, and the analysis and manipulation of these factors can greatly help a person in recovery.

CBT looks to pinpoint certain thoughts and beliefs that can lead to negative feelings. Many individuals in recovery have a set of false or distressing beliefs that consistently serve as triggers for stress and anxiety. Stress and anxiety are two common causes of relapse, as they can lead a person to use in order to quell those emotions. A therapist practicing CBT will help the client pinpoint certain beliefs as false and convey how these thoughts can lead to problems in the client’s life.

According to CBT, negative thoughts and feelings can lead to problematic behavior. Identifying patterns of behavior is a key part of the recovery process. When a person can see the pattern and how it leads to negative consequences, they can then seek to break that pattern. CBT aims to teach a person coping skills that can help them when problems arise. Anticipating these problems is an important part of the therapy, as it makes dealing with them easier down the road.

CBT often helps an individual calm themselves when facing a stressful situation. Dealing with anxiety can be crucial in avoiding relapse. CBT requires intense involvement of the client, as well as a tight-knit working relationship with the therapist.

The beauty of CBT is that the tools learned during therapy are long-lasting and can remain with an individual even after structured sessions have ended. This is a major reason for the success of CBT over the years, and it continues to be the preference of many recovery professionals.

CBT is not the only viable treatment program for substance abuse, however. It can often be beneficial to involve family members in the recovery process. Family therapy is a way to examine behaviors in the context of the family unit. This therapy is normally completed with a therapist and multiple members of a family in an effort to see how family dynamics may have played a role in an individual’s addiction. Sometimes, one or more family members enabled the individual’s substance abuse, and they need to understand that what they do is important in regard to the individual’s sustained sobriety.

Group therapy that involves others in recovery is often part of addiction treatment programs. The group setting allows participants to see that there are other people dealing with the same struggles they are experiencing. Oftentimes, relationships formed in group therapy.

Complementary therapies can help to round out a treatment program. While they aren’t the primary form of treatment, they can augment traditional, evidence-based therapy. For example, art therapy is one specific kind of group therapy that has seen success in recovery efforts. It allows an individual to express themselves through a medium, such as drawing, painting, or sculpting. For some, it may be easier to do this than to express themselves with words. An individual may feel more comfortable discussing the meaning of their work and how it relates to their addiction than they feel discussing their problems without the context of their artwork. Other forms of therapy may incorporate music in a similar fashion.

There are many different kinds of therapy that can be effective in substance abuse recovery. For those struggling with K2 or Spice abuse, there is hope in recovery. Treatment should be individualized to fit the needs of the person in recovery. With the right program, each individual can achieve recovery and leave synthetic cannabinoid abuse in their past.

synthetic
Ready to get started?
We're available 24/7 to answer questions and help you make decisions about starting recovery from drug use.
Your Next StepsDon't gamble on your addiction.