Suicide is a national problem in the U.S. and a major concern for our active-duty service members and military Veterans. Members of the military may experience a variety of difficult and traumatic events including combat, natural disasters, and physical assault. Issues that Veterans face after service may also contribute to their risk, including post-deployment challenges, employment difficulties, injury, and substance use.

How Many Veterans Die by Suicide?

Suicide in Veterans is a growing problem, as illustrated by the following statistics from the U.S. Department of Veterans Affairs:2

Suicide rates in the U.S. fluctuate by decade, location, occupation, and demographics.2

Why Do Veterans Commit Suicide? 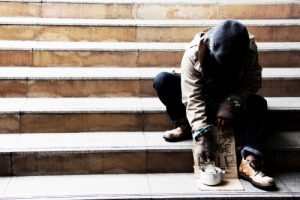 The VA has found that some of the many factors impacting suicide risk in Veterans include:2

Additional Veteran-specific risks for suicide can include:3

Suicide is preventable. Knowing the warning signs and watching for them can allow you to help someone at risk. Major changes in mood, thought, and behavior can be red flags. Specific warning signs include:4

While all warning signs merit attention, there are some that require immediate action, as they may indicate the person is close to making a suicide attempt. These include:3,4 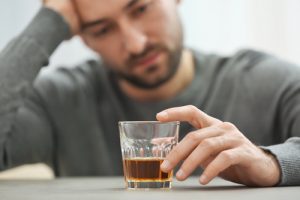 Addiction, or the inability to cut back or stop using a substance despite the harm it causes, is clinically referred to as a substance use disorder (SUD). Military Veterans are at an increased risk for certain SUDs compared to civilians.5  In fact, 11% of Veterans who enter a VA healthcare system for the first time meet the criteria for an SUD. 5

Many factors specific to the Veteran population can increase the likelihood of developing an SUD. These risks can include difficulty reintegrating to civilian life, combat exposure, and deployment.5

Having a substance use disorder is associated with numerous problems, including:

One study looking specifically at military personnel found that in the case of about 30% of all completed suicides, the individual used drugs and/or alcohol beforehand.5 According to the Substance Abuse and Mental Health Services Administration (SAMHSA), suicide is a leading cause of death for individuals who abuse substances.6

Substance use disorders are second only to depression and other mood disorders in the spectrum of risk factors for suicide.6 The good news is that there are programs where you can get treatment for both in one place. Desert Hope is one such facility. In the Salute to Recovery program, we provide high-quality co-occurring disorder treatment for veterans. This means we’ll provide integrated treatment for your addiction and for other mental health struggles you may be dealing with.

Addiction and Suicide in Veterans With PTSD

PTSD and SUDs commonly occur together in the Veteran population. Research shows that many Veterans increase their substance use when their PTSD symptoms worsen.7 Experiencing trauma can cause intense mental and emotional pain and suffering, contributing to increased risk for suicide.1 In fact, soldiers consistently report attempting to end emotional suffering as a central motivation behind their suicide attempts.1

According to the VA, Veterans suffering from PTSD who are most in danger of attempting suicide are those who have excessive guilt over actions they took during combat. The incredibly distressing thoughts and pain that come from things they did in combat can handicap Veterans emotionally and make it incredibly difficult for them to work through their feelings.8

Studies have found that the risk of suicide in those with PTSD is higher among individuals whose coping style is to avoid expressing their emotions.8 With military culture espousing strength, stoicism, and self-reliance, this may be especially common among Veterans. 9

Veterans may turn to substances such as alcohol in an attempt to handle or suppress traumatic memories and emotional turmoil. The VA reports that people with PTSD are more likely than those without it to develop problems with alcohol, for example.10 While the Veteran may initially reach for substances to feel better, substance use tends only to worsen PTSD symptoms over time.11

Given that both SUDs and PTSD are risk factors for suicide, a Veteran suffering from both issues at the same time may be severely at-risk. 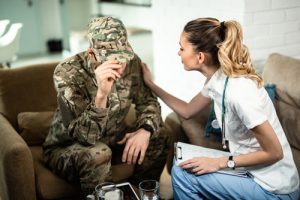 Suicide is preventable. You can get help for yourself or a loved one today.

A good place to start is by checking into the treatment options available with the VA. The VA offers mental health and substance abuse treatment at VA facilities across the country. If you’re not sure what specific type of help you need, you can call  877-222-8387 for help finding the best fit for you. If you’re ready to get started, you can search facilities with the VA’s locator tool.

In some cases, you may not be able to access the treatment you need with the VA due to issues like a lack of providers within a reasonable distance or wait times that are too long. In this case, the VA partners with community care providers to get you the care you need.

Desert Hope is proud to be a certified community care provider with the VA. We work every day to help Veterans dealing with substance abuse and mental health issues find hope. In our dedicated Veterans’ program, we provide specialized care that targets your needs, including trauma-based therapies, coping skills, family therapy, and education on issues such as hypervigilance and post-traumatic responses.

Veterans Crisis Line—If you are in immediate danger, or you’re worried about someone you love, call the at 1-800-273-8255 or click to chat. This hotline is available 24/7 for Veterans and family members in need.

VA Local Resource Search Tool—Provides an easy way to search for resources near you. You can filter your search to look for suicide prevention coordinators, VA medical centers, outpatient clinics, and more.

Make the Connection—Provides information on suicidal thoughts and behaviors, resources for individuals in crisis, treatment, and more.

Military OneSource—Free 24-hour service provided by the Department of Defense for Veterans and their families to help with many concerns, including mental health problems. 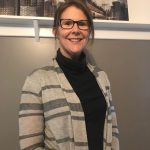