What is Alcohol Moderation Management?

Moderation Management (MM) was founded by Audrey Kishline in 1994. Kishline had suffered from issues with alcohol abuse for several years. She had been able to continue to work and function relatively independently and had become involved in Alcoholics Anonymous as an effort to control her alcohol use and abuse. Kishline found the approach of AA and other 12-Step groups, as well as the notion of the disease model of alcoholism adopted by the medical community, inconsistent with her experiences. She wanted to develop an alternative program. Kishline consulted with numerous professionals in the addiction treatment community regarding substance abuse issues to help her in developing the Moderation Management program.

Before going any further, it is important to complete the story of Ms. Kishline as it offers a valid perspective regarding her specific struggles with her alcohol use disorder. In early 2000, Kishline had come to the conclusion that abstinence was the only way to address her specific problem and that she would start re-attending meetings that included Alcoholics Anonymous (AA) meetings, Women for Sobriety meetings, and SMART Recovery meetings, which are all abstinence-based programs. She officially posted her decision on her formal email list and documented that she would continue to support Moderation Management for some individuals. While attending these abstinence-based support programs, Kishline was involved in an accident where she drove her truck down the highway the wrong way while inebriated, hit another vehicle head on, and killed a father and his 12-year-old daughter. Kishline was convicted and received a 4.5-year prison sentence, of which she served nearly 3.5 years and was then released.

The cases of Audrey Kishline and other MM members who have relapsed have been used by supporters of the medical model of addiction and abstinence-based recovery programs, such as AA, to discredit the MM program. However, if any of these treatment programs or philosophies were to be totally honest regarding their successes and failures, they would acknowledge that similar occurrences (e.g., relapses that lead to significant destruction, harm, and even the death of innocent individuals) occur with recovering individuals who are involved in any treatment program regardless of its philosophy. Relapse is a factor that occurs in individuals with substance use disorders regardless of the specific type of intervention they choose to engage in. If any program were to be deemed as ineffective or dangerous as a result of certain individuals in the program relapsing and causing harm to others, then no substance use disorder treatment program could be deemed effective or appropriate.

In addition, supporters of MM publicly state that the program is not for everyone and encourage individuals who cannot adhere to the MM philosophy to become involved in more stringent recovery programs that stress abstinence-based policies.

Drug and Alcohol Moderation Management (MM) is based on principles that are also used in Cognitive Behavioral Therapy. The primary focus of the program is learning moderation regarding alcohol, but the principles of the program can be extended to other drugs of abuse. The MM organization attempts to help individuals with alcohol abuse issues, who do not have physical dependence on alcohol, maintain moderate alcohol use. 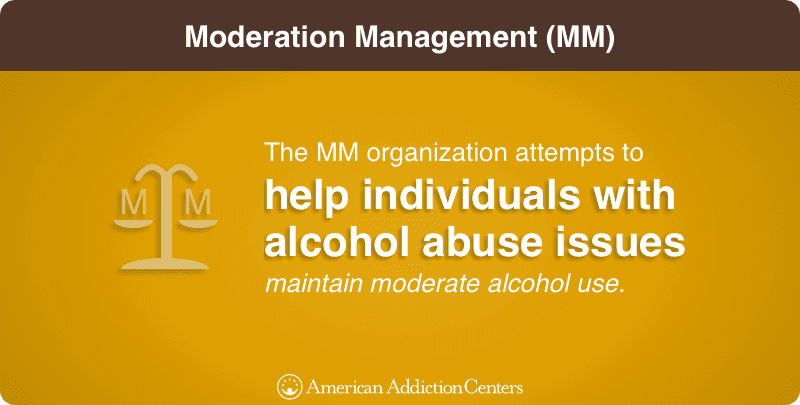 Again, proponents of MM understand that their program is not for everyone. The MM organization reports that nearly one-third of the individuals who become involved in their program eventually transition to abstinence-based treatment programs.

Moderation Management meetings are also guided by the following philosophies:

Moderation Management assumes that all behaviors can be changed and that alcohol use is a learned behavior for problem drinkers and not a disease. MM also assumes that there are varying degrees of alcohol abuse and alcohol-related problems, and a reasonable option for some individuals early in the development of their alcohol use disorder is to find a way to return to moderation. Using alcohol or other drugs in moderation may be challenging, and some individuals may find that they need to become involved in more stringent programs. But the choice to engage in moderation or become involved in abstinence-based programs should be a choice and should not be forced on anyone, particularly when an individual is experiencing problems early in the progression of their alcohol use issues.

MM meetings operate on the basis of nine steps that are designed to help members learn to moderate their use of alcohol or other drugs:

Moderation Management is a secular program that does not focus on surrendering oneself to a higher power, admitting that one is powerless, or the need to confess one’s wrongdoings to others. MM guidelines and limits to moderate drinking are designed to be flexible but do have some specifications, and it is suggested that members follow these guidelines:

The research investigating effective approaches to the treatment of substance use disorders, and of alcohol and drug use, indicate that there are numerous programs that demonstrate variable levels of effectiveness to cope with these issues. Proponents of Moderation Management consider this program to be a good place to start for most individuals, but it is not appropriate for everyone, and many members of MM progress to more stringent approaches. If the MM program does not work for an individual or if they are unable to follow the steps of the program, they should consider becoming involved in stricter programs that stress abstinence. Individuals who have developed significant physical dependence on alcohol or other drugs are not appropriate candidates for MM.

In general, the research suggests that the MM program is moderately effective, which is consistent with the effectiveness of most other research findings for substance use disorder treatment programs. Interestingly, the research regarding 12-Step programs (which tend to be some of the most stringent critics of programs like MM) is lacking and the available evidence suggests that their success rates are typically lower than or equivalent to success rates of other programs. While many proponents of 12-Step groups like Alcoholics Anonymous consider their approach to be the only appropriate means to deal with alcohol use issues, MM is very open and understanding in its approach and regarding its effectiveness. MM does not attempt to present itself as the only successful approach to deal with alcohol abuse issues.

In the final analysis, Moderation Management does offer an alternative approach for individuals who are beginning to have issues with their use of alcohol or other drugs and would not meet the formal diagnostic criteria provided by the American Psychiatric Association for a moderate to severe substance use disorder. In addition, individuals who have suffered significant issues in their personal relationships, financial situations, and occupations, or have become involved in legal issues associated with substance use (e.g., have received DUI citations), are probably not appropriate for Moderation Management. Certainly, the legal system would frown upon an individual who has received one or more DUI convictions attempting to continue to drink as most courts demand abstinence from these individuals while they are on probation.

Instead, MM may be appropriate for individuals who are experiencing issues with alcohol use that they wish to rectify and who can adhere to the practices of the program. Those with alcohol use disorders or who engage in regular alcohol abuse should seek out professional treatment.

Moderation Management may be a way for a person to ease into recovery, as it can seem initially less daunting than complete abstinence. An individual may be resistant to traditional treatment models, and MM may be a method of encouraging a loved one to receive some form of support and encouragement toward recovery.

Once a person attempts to stop drinking for the 30-day period, they may then realize how much control alcohol really has over their life. Harvard Health publishes that this may provide incentive or motivation to stop drinking altogether. A person may decide to then enter into a more comprehensive treatment program after beginning Moderation Management.

Alcoholism is a chronic and relapsing disease, and generally speaking, the more severe the dependence and addiction, the more common relapse will be. Those who drink less alcohol less often may be better suited to a Moderation Management-type program than those who consume more alcohol on a regular basis. Again, individuals battling severe alcohol dependence should NOT attempt an MM program. Severe alcohol withdrawal can be fatal without proper care.

Pros and Cons of Moderate Drinking

There is a great debate between the pros and cons of moderation versus complete abstinence. Regular participation in a 12-Step program like AA that requires abstinence has been shown to be beneficial to long-term recovery, as published by the Journal of Addictive Disorders. Other studies reported by the Journal of Consulting and Clinical Psychiatry show that nondependent problem drinkers may be able to reduce their drinking through a program like Moderation Management, however.

Moderation Management can seem like a valid answer to those who need some help learning how to control their drinking and how to manage cravings and possible triggers without the pressure of feeling like they can never drink again socially and without the labels of the disease model. It may not work for everyone, however. Even the founder herself was unable to drink in moderation and ended up relapsing and getting into a serious car accident after driving drunk, NBC News reports. Audrey Kishline was unable to follow her own rules of the MM program and admits that it might not be an effective strategy for everyone, including her.

For those who struggle with alcohol cravings and alcohol dependence, even drinking in moderation may lead to a dangerous relapse and problem drinking again. Psychology Today publishes that individuals who do not remain sober for at least a year relapse about two-thirds of the time, while those who remain sober for five years only suffer relapses at rates of 15 percent or less, indicating that long-term abstinence may lend itself to long-term recovery.

Each individual is likely to follow their own path, and there are pros and cons to both Moderation Management and complete abstinence. Both abstinence-based programs and MM help people to develop new life skills, healthy habits, coping mechanisms, and better self-control. Both strive to help individuals live healthier and happier lives by providing encouragement and support.

In short, individuals with fewer drinking problems and low levels of dependence may benefit from MM. When alcohol interferes with daily life and a person struggles with compounding concerns related to drinking, abstinence-based programs and a comprehensive treatment program may be optimal. Treatment programs should be tailored to the individual in order to discover what works best for them and their personal recovery.