What Can Happen If You Use Too Many Nicotine Patches?

Most people who experience nicotine overdose will recover if emergency medical services are sought quickly, and long-term health problems from the event are uncommon. However, slow heartbeat and difficulty breathing can cause hypoxia, a condition in which the brain is not getting enough oxygen. This and coma can cause brain damage. Increased blood pressure and heart rate caused by the stimulant effects can also be dangerous to those with underlying heart conditions.

The lethal dose of nicotine is anywhere between 500 and 1000 mg. Whether a large dose will trigger overdose or be life-threatening depends largely on personal factors like body weight, age, tolerance to nicotine, and genetics. It can also be affected by the presence of other drugs in the person’s system. Nicotine tends to be much more dangerous in young children than adults – even one cigarette can make them sick.

Nearly 70 percent of all people who smoke tobacco on a regular basis want to quit and make multiple attempts, according to the Centers for Disease Control and Prevention. Many try nicotine replacement aids like patches. However, because nicotine addiction is not as disruptive to people’s lives as addiction to other drugs, quitting often isn’t taken as seriously, and most addicted persons don’t seek professional assistance.

The fact is that nicotine dependence can be dangerous even in the short term and quitting can be very difficult. Seeking professional treatment services can help get addicted individuals onto the right path and provide them with all the information needed to avoid dangerous situations like nicotin

Are There Added Risks if You Use Nicotine Patches with Other Drugs?

Unlike other prescription medicines, nicotine patches do not interact with many drugs, both recreational and prescription. However, patches do have some interactions, including with antidepressants. This is because nicotine and antidepressant medicines act on similar systems in the brain, which is why bupropion (Wellbutrin) is not often prescribed as a mood stabilizer anymore; instead, it is being used to help people stop smoking or using nicotine in other ways. Nicotine patches can change the effectiveness of antidepressants.

Some blood pressure drugs interact with nicotine patches, and their effectiveness may be decreased. Nicotine patches can also change how insulin is processed in the body. This is because quitting smoking, or other nicotine products, can change how the body metabolizes nutrition. Changes in metabolism alter the bioavailability of insulin too. Metabolic changes can also change how people experience caffeine, acetaminophen, and other drugs, both prescription and recreational.

Antipsychotics are particularly likely to interact with nicotine replacement therapies like patches. Hypotension, increased serum levels, and drowsiness are common side effects when these medications are combined. People who struggle with schizophrenia are particularly likely to smoke, so it is important for doctors to know if their patient is interested in quitting smoking and discuss how nicotine patches may interact with antipsychotic medications.

It is possible that medicines like benzodiazepines can, when mixed with a consistent source of nicotine like patches, increase drowsiness. Driving, operating heavy machinery, and performing other physical activities could be more dangerous with this combination. Sedative-hypnotic sleep aids can act similarly, as can some anticonvulsants.

In comparison, opioid analgesics work better when a person quits smoking using nicotine replacement therapies, such as patches. However, this may mean that a person finds they are on too high a dose of prescription painkillers and begins to feel negative side effects or intoxication. Overdose is unlikely, but it is important to speak with a doctor regarding nicotine patches and prescription painkillers, so the dose can be closely monitored.

Anticoagulants, such as warfarin, can cause greater thinning of blood, which may be dangerous because the inability to clot can cause internal bleeding.

Nicotine in any form can exacerbate existing health conditions, especially heart disease. Any nicotine replacement therapy, including patches, can act on these conditions as well as on the medicines used to treat them.

Can Nicotine Patches Cause Cancer?

Smoking cigarettes has been associated with an increased risk of several cancers, especially lung cancer. Because of this concern, many people associate nicotine with cancer, so they may not want to use any nicotine products.

An article published in the United Kingdom states that researchers have linked a chemical in nicotine to an increased risk of cancer, including lung cancer. Nicotine gums, lozenges, and patches can still potentially cause cancer.

Anti-smoking medicines like nicotine patches are designed primarily for short-term use, although some people may use them longer-term to avoid relapsing back to smoking. Short-term use does not impact the risk of developing cancer, but long-term use, like smoking or other forms of nicotine abuse, does increase the risk. In the rare instances in which someone abuses nicotine patches for recreational reasons, their risk of cancer is likely to increase.

In a 2009 study, smoking was clearly linked to an increased risk of cancer while nicotine replacement therapies, including patches, were not. The study notes that the only cancer correlation occurred among people who used nicotine replacement therapy for a long time. It should be noted that correlation and causation are different, so the increased risk of cancer could still be more related to previous smoking, not necessarily to smoking cessation tools like patches. 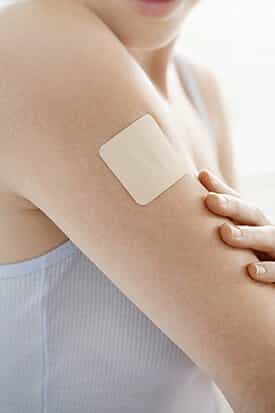 Smoking tobacco is well known for its dangerous long-term effects, but most people consider the behavior to be generally safe on a short-term basis.

You don’t often hear about nicotine overdose, but it is very possible to ingest too much of this drug and experience dangerous symptoms. It’s unlikely for this to happen through smoking due to the fact that the smoking process dilutes the amount of nicotine in every cigarette. Most cigarettes contain around 10 mg of the substance, but the average smoker only ends up with 1-2 mg in the blood from each.

Purer forms of nicotine are toxic to humans and animals. Most cases of nicotine overdose come from either working with tobacco crops without proper protective clothing or from quitting methods like nicotine gum and patches. Patches often come in different doses for people with different smoking habits. If a light smoker accidentally uses a high-dose nicotine patch, overdose can occur. It’s also possible to overdose from smoking while wearing a nicotine patch or using both the gum and patches at the same time. It’s important to look at the instructions and warnings on any package of a nicotine-based quitting aid to avoid a dangerous situation.

Depending on the extent of the poisoning, wearing too many nicotine patches can result in anything from mild discomfort to dangerous symptoms. People are less likely to take nicotine overdose seriously due to the fact that the substance is legal in most areas, but any level of nicotine poisoning should be treated as an emergency.

Symptoms of nicotine poisoning include:

overdosestimulants
Prefer getting help via text?
We're available 24/7 via text message. Signup below for access to our team when its convenient for you!
and many more...
✕
Instantly Check Your Insurance Coverage
Your information is safe & secure
At Desert Hope, we accept most types of private (non-government) insurance and offer a variety of payment options.
You can quickly and privately check your insurance benefits to see if you're covered for addiction treatment services. We’ll be able to tell you if your provider is in network with Desert Hope Treatment Center and all American Addiction Centers locations.
This means your treatment may be FREE1 depending on your policy, copay, and deductible.
Your Next StepsRecovery is possible. We're here to help with your addiction.