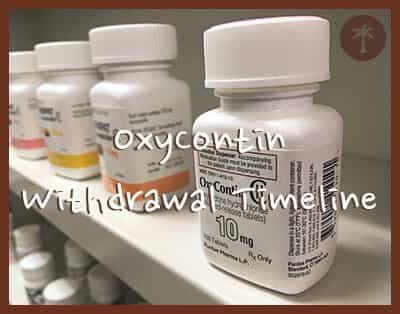 By most accounts, OxyContin is the prescription painkiller at the heart of the opioid crisis claiming tens of thousands of lives across the country. Its strong effects drive its abuse, but many patients and addicted people are unaware of the seriously damaging health effects that come with using the drug too much. OxyContin withdrawal is one of those unpleasant surprises, but it is a necessary part of the process for treatment and rehabilitation.

The Story behind OxyContin

OxyContin is the brand name of the oxycodone, a semisynthetic opioid used in the treatment of moderate to severe pain. The formulation of OxyContin, manufactured by Purdue Pharma, is such that the oxycodone is on a timed-release mechanism, giving patients relief from pain for up to 12 hours by changing how the brain and central nervous system perceive pain and physical discomfort.

In the mid-1990s, Purdue Pharma embarked on an unprecedented marketing campaign, pushing doctors to prescribe more OxyContin and directly encouraging patients to ask their doctors for OxyContin. It was a “commercial triumph,” says the American Journal of Public Health, because it made OxyContin one of the most popular drugs in America almost overnight, and the doctors who prescribed the drug, as well as Purdue Pharma itself, made a lot of money in the process.

However, the astronomical success of the drug hid the deeply habit-forming nature of the oxycodone, especially when users took much more than was prescribed for them. Purdue Pharma knew about this, claimed the Department of Justice in 2007, but attempted to cover up the reality of abuse. By that point, hundreds of thousands of people were uncontrollably using OxyContin to not just alleviate real or imagined pain, but also simply to enjoy the narcotic effects of an opioid that was becoming as popular as heroin.

Oxycodone is such a powerful opioid that even proper consumption has to be carefully monitored. It can cause problems with breathing and heart rate, which, if left unchecked, can damage the brain and cause death by respiratory failure and overdose. Nonetheless, the powerfully euphoric sensation and the “emotional detachment from pain,” in the words of the Clinical Cases in Mineral and Bone Metabolism journal, can compel some people to take the risk of consuming oxycodone for longer than they should. This compulsion can be driven by other factors, such as pre-existing mental health or medical conditions, a family history of such problems, the presence of other drugs, or lifestyle and environmental stressors.

The oxycodone opioid works by binding to specific opioid receptors in the brain and central nervous system. The action of binding changes the perception of pain and triggers a strong emotional response (the euphoria) through the forced production of the dopamine neurotransmitter in the brain. The brain normally produces dopamine as a response to pleasant stimuli, to encourage the stimuli to continue. Drugs like opioids, especially strong ones like oxycodone, push the brain to release more dopamine than it would typically for a naturally occurring stimuli. The burst of euphoria and dopamine provides a break from pain relief, but it is so strong and alluring that users often take more OxyContin to try and recapture it or to keep their pain at bay.

As a user takes more and more OxyContin to deal with pain or to try and relive the euphoric feeling, the body becomes increasingly dependent on oxycodone to manage pain and then to simply function without distress. This change is known as tolerance, which the Institute for Chronic Pain describes as a process that takes place when a person requires higher amounts of a drug “to continue to obtain the original degree of its desired, therapeutic effect.” Even though the original feeling of the OxyContin is never fully realized with every subsequent dosage of the medication, the body and brain continue to increase their dependence on the drugs to the point where attempting to go without the substance becomes increasingly difficult.

After the chemistry of the brain and central nervous system have been so radically and repeatedly altered by the constant presence of oxycodone, discontinuing intake can cause severe and distressing withdrawal symptoms. The first effects are usually felt within 8-12 hours of the last consumption of OxyContin, and the peak is felt after 72 hours without any drugs. In general, the symptoms decline in a week’s time, but even though the physical symptoms are settled, there are usually psychological effects that require therapy to address.

The OxyContin withdrawal timeline depends on a number of factors, such as:

When it comes to the formulation of the medication, the duration of withdrawal depends on the half-life of the particular formulation. If the OxyContin is immediate-release, for example, it takes up to four hours for the body to metabolize half of the drug present; extended-release oxycodone takes around 12 hours to drop its content by 50 percent.

Similarly, how the OxyContin has been abused will also make a difference in the length of the withdrawal process. Whether the oxycodone has been injected, snorted, or even smoked will determine how quickly the opioid has been released into the bloodstream. In this way, some methods have an almost instantaneous effect, but the drug will be active for a shorter period of time. On the other hand, if the drug is swallowed in pill or tablet form and digested, the mechanism of effect is slower, but the medication remains in the system for longer and will take more hours to purge.

Signs and Significance of Withdrawal 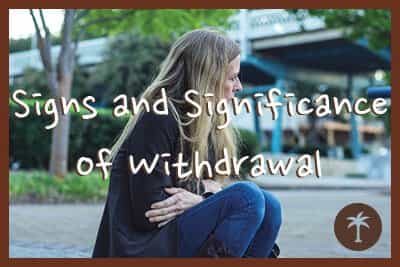 Speaking to Medical Daily, a doctor in New York who specializes in drug and alcohol addiction treatment explained that in the initial stages of withdrawal, people will start yawning uncontrollably even if they do not feel tired. This is because the yawning is an overcorrection to the lack of the narcotic presence in the system. It is usually an early-phase withdrawal symptom, occurring in the first 8-12 hours since the last dose of oxycodone, and it is gone by 48 hours.

Other early signs of withdrawal include flu-like symptoms, such as a runny nose, fatigue, and a deep ache in the bones. As withdrawal progresses, people experience nausea, vomiting, and even diarrhea. All the withdrawal symptoms, from the start of the process to the finish, are signs of the central nervous system, newly freed of the oxycodone binding to its opioid receptors, struggling to adjust without the drugs upon which it had become so dependent. In general terms, the more severe the level of physical dependence on the OxyContin, the worse the withdrawal symptoms will be.

OxyContin withdrawal symptoms are not life-threatening, but they can cause complications that can become quite serious. People who have severe diarrhea, for example, can lose so many nutrients through their loose stools that they become dehydrated and malnourished. Those who have pre-existing heart diseases are at risk of a heart attack because of the general stress of the withdrawal symptoms. The vomiting might become so forceful that the esophagus becomes ruptured, which is a serious medical condition in and of itself, according to Healthline. 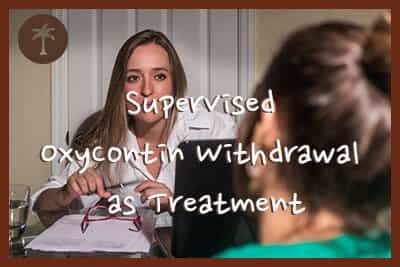 A former opioid abuse told Medical Daily that “the first three days [of withdrawal] are hell, and then it starts to alleviate.” The physical symptoms end after about a week of controlled and monitored withdrawal, where doctors and medical professionals monitor the patient to ensure that their health is never in danger. This might entail putting the patient on an IV drip to ensure that the diarrhea and vomiting don’t dry out the body or administering drugs like buprenorphine and methadone. Both opioids only partially bind to the opioid receptors, allowing for an easier process of weaning off the stronger OxyContin. In other cases, patients might be given anti-anxiety and anticonvulsant drugs to help them weather those particular symptoms.

This kind of supervised withdrawal is known as medical detox, and it is the only safe way to withdraw from oxycodone. During detox, patients are monitored around the clock to ensure that their bodies are responding properly to the withdrawal symptoms, and their vital signs are steady. They are allowed to rest and heal in proper conditions. Withdrawing without this kind of care raises the risk of the person giving in to the intense craving of going back on oxycodone to make the discomfort go away. It is a natural inclination, but after the severity of the withdrawal symptoms, there is the danger of the person abusing OxyContin to an even greater degree than before. Given the body’s weakened state during withdrawal, oxycodone could also be more damaging than it was before the attempted 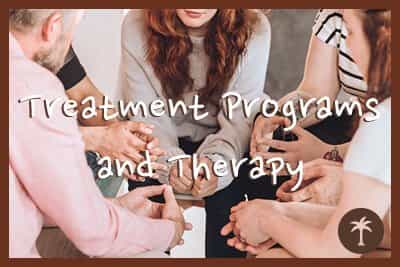 OxyContin is a powerful enough medication that most individuals will be put into an inpatient treatment program to detox safely. Those whose abuse of the drug is not as severe might be able to make use of an outpatient treatment facility, where their cravings are under control enough that they can be released into the care of friends or family members. But for people who need the full week or two weeks of withdrawal, an inpatient arrangement removes them from the lifestyle or environmental stressors that might trigger a relapse and ensures that their bodies heal safely.

After the person has safely made it through the medical detox period, they will transition into a therapy program. This kind of mental health therapy helps the person deal with the psychological causes and effects of OxyContin abuse. While successful withdrawal addresses the physical craving for oxycodone, the abuse of the medication leaves long-term emotional and behavioral scars that need to be healed. Through group, individual, and family therapy, people learn how to enjoy life without the continual temptation to recapture the euphoria and emotional disconnection from pain that once dominated their days. This part of the treatment cannot be completed until the physical cravings for oxycodone and the physical effects of withdrawal have been settled. For long-term rehabilitation from opioid abuse, it is imperative that individuals go through medical detox and then participate in therapy.