Though a relatively mild opioid painkiller, codeine is a drug with known abuse liability. Should significant physical dependence develop, codeine can be challenging to quit due to the marked discomfort of withdrawal.1 As with other types of acute opioid withdrawal, codeine withdrawal may be difficult to endure but can be managed more comfortably with medical detoxification.

Codeine and Other Opioids 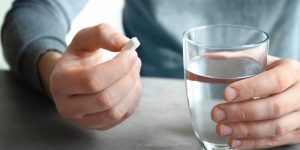 Opioids are a class of drugs that include heroin and many medications prescribed for pain, including morphine, oxycodone, hydrocodone, and codeine.1

As a prescription opioid painkiller and antitussive, codeine is used to treat mild to moderate pain and to alleviate coughing.1,2 It is commonly taken in oral tablet form or as a liquid cough syrup and is sometimes sold in combination with other pain relievers, such as acetaminophen (Tylenol) or aspirin.1,2

Opioids like codeine work by binding to and activating certain opioid receptors located throughout the brain and spinal cord, to alter pain signaling. This opioid receptor activation is associated with a release of larger than normal amounts of dopamine, a neurotransmitter involved in feeling pleasure and reward.1 Codeine is effective at diminishing pain, but it can also elicit a feeling of euphoria, cause drowsiness and confusion, and slow breathing.1

Scheduling for codeine varies. In some formulations, codeine is classified as Schedule II drug by the Drug Enforcement Administration, which means it has a high potential for abuse and can cause psychological and physical dependence.3 Other codeine-containing products with less than 90 mg of codeine per dosage (e.g., Tylenol with Codeine®) are considered Schedule III, because their potential to be abused and cause dependence is slightly lower.3 Other countries, such as Australia, have recently created stricter laws regarding the sale of codeine. In 2018, Australia outlawed the sale of codeine over-the-counter, making it available only with a doctor’s prescription.4

Opioid painkillers like codeine are generally safe when taken for brief periods in accordance with a medical prescription.2 However, in addition to their painkilling functions, their ability to elicit a pleasurable euphoria reinforces continued use. As a result, these drugs are frequently misused, such as by taking more than prescribed, taking them in ways other than directed, or using them without a prescription.1 Excessive or long-term use of opioid pain relievers can lead to dependence and addiction and increase the risk of experiencing negative consequences, including overdose and death.1

Side Effects of Codeine

Certain physiological changes accompany the repeated activation of opioid receptors in the brain that result in diminished effects from the drug over time—a phenomenon called tolerance.5 As tolerance grows, a person may no longer feel the desired effects when using the usual amount of the drug and may require a higher dose to achieve them.1,5

Codeine users who begin developing tolerance may begin to take more of the drug in hopes of feeling the same euphoria or pain relief that they initially felt.

Tolerance (and the increasing drug use that it often leads to) often goes hand in hand with dependence, a phenomenon in which a person’s system has adapted to a substance and needs it to function as expected. Without the drug, a person who has developed significant dependence will enter withdrawal.6

Both tolerance and dependence are normal responses to the ongoing use of a medication; however, abuse of the drug may hasten these phenomena.

The acute codeine withdrawal syndrome may consist of a combination of physical and psychological symptoms.5

Codeine withdrawal symptoms may include: 1,2,7,8

People attempting to cut back or stop taking codeine may experience a combination of withdrawal symptoms, which can range from mildly uncomfortable to painful depending upon the person and their history of use.7 Cravings to use more codeine can be intense, which can put even the most motivated people at risk for relapse. Some users may even avoid quitting because of concerns about going through the withdrawal process.1

The severity of withdrawal and how quickly symptoms resolve will vary somewhat from person to person depending upon the length of use, daily dose, and mental/medical health status.7 Acute withdrawal symptoms may set in within a few hours of the last dose and may persist for 4 to 10 days.1,9 Symptoms like anxiety, aches, sweating, and runny nose may begin first, while more severe symptoms, like nausea, vomiting, cramps, and diarrhea, may arise somewhat later in the withdrawal process.8

The distress associated with protracted withdrawal may be mitigated with ongoing support in the form of recovery groups and therapy, as well as healthy lifestyle changes and celebrations of positive achievements in recovery.9

Getting Help for Codeine Withdrawal

Codeine withdrawal may be an unpleasant experience, but it is necessary in order to recover from codeine dependence and addiction. With the help of medical detoxification, many of the symptoms of codeine withdrawal can be managed to reduce physical and emotional discomfort. Seeking the help of an addiction treatment program can provide the tools and strength necessary to put codeine dependence and addiction in the past.

Hear from a former patient who went through the detox and treatment process and regained her health and happiness in an American Addiction Centers facility.

Emily Guarnotta holds a doctorate in clinical psychology and has a special interest in treating and spreading awareness on drug, alcohol, and behavioral addictions. She has clinical experience working with dual diagnosis clients in residential and... ... Read More

opiatewithdrawal
Prefer getting help via text?
We're available 24/7 via text message. Signup below for access to our team when its convenient for you!
and many more...
✕
Instantly Check Your Insurance Coverage
Your information is safe & secure
At Desert Hope, we accept most types of private (non-government) insurance and offer a variety of payment options.
You can quickly and privately check your insurance benefits to see if you're covered for addiction treatment services. We’ll be able to tell you if your provider is in network with Desert Hope Treatment Center and all American Addiction Centers locations.
This means your treatment may be FREE1 depending on your policy, copay, and deductible.
Get the Info & Help You NeedWe're open across the US. Learn about your options.