Drug Use Statistics in the LGBTQ+ Community

The LGBTQ+ community faces a unique set of challenges in America. In addition to fighting for acceptance and legal rights in society, the LGBTQ+ community has a higher risk of other problems when compared to the general population, including mental illness, homelessness, and substance abuse. At Desert Hope Treatment Center, we’re committed to treating our patients as individuals and addressing the unique challenges in life that led them down the path of substance abuse.

With that in mind, we decided to conduct a survey centered around LGBTQ+ drug use and how it compares to heterosexual individuals. We ran a nationwide survey of 1,700 Americans who admitted to using or abusing drugs with over 400 of them identifying as LGBTQ+.

What we found is that members of the LGBTQ+ community are more likely to start using drugs at an earlier age and use more types of drugs. Further, over half feel they don’t have the support they need when they want to stop using. Here are the details of our findings: 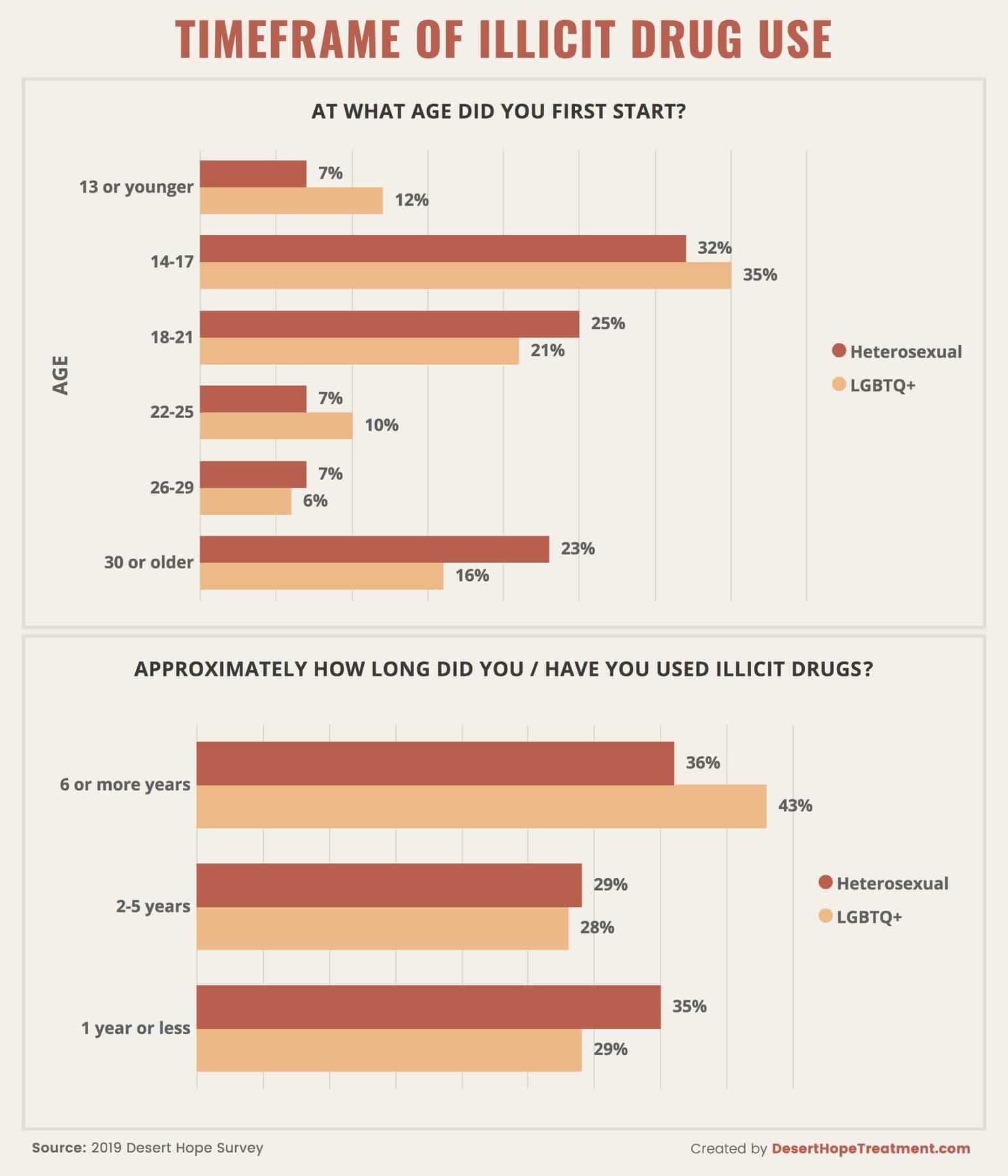 We also found that LGBTQ+ people are more likely to use drugs for a longer period of time. 43% of individuals said they used for 6 or more years compared to the 36% of heterosexual respondents that used for that same time period. 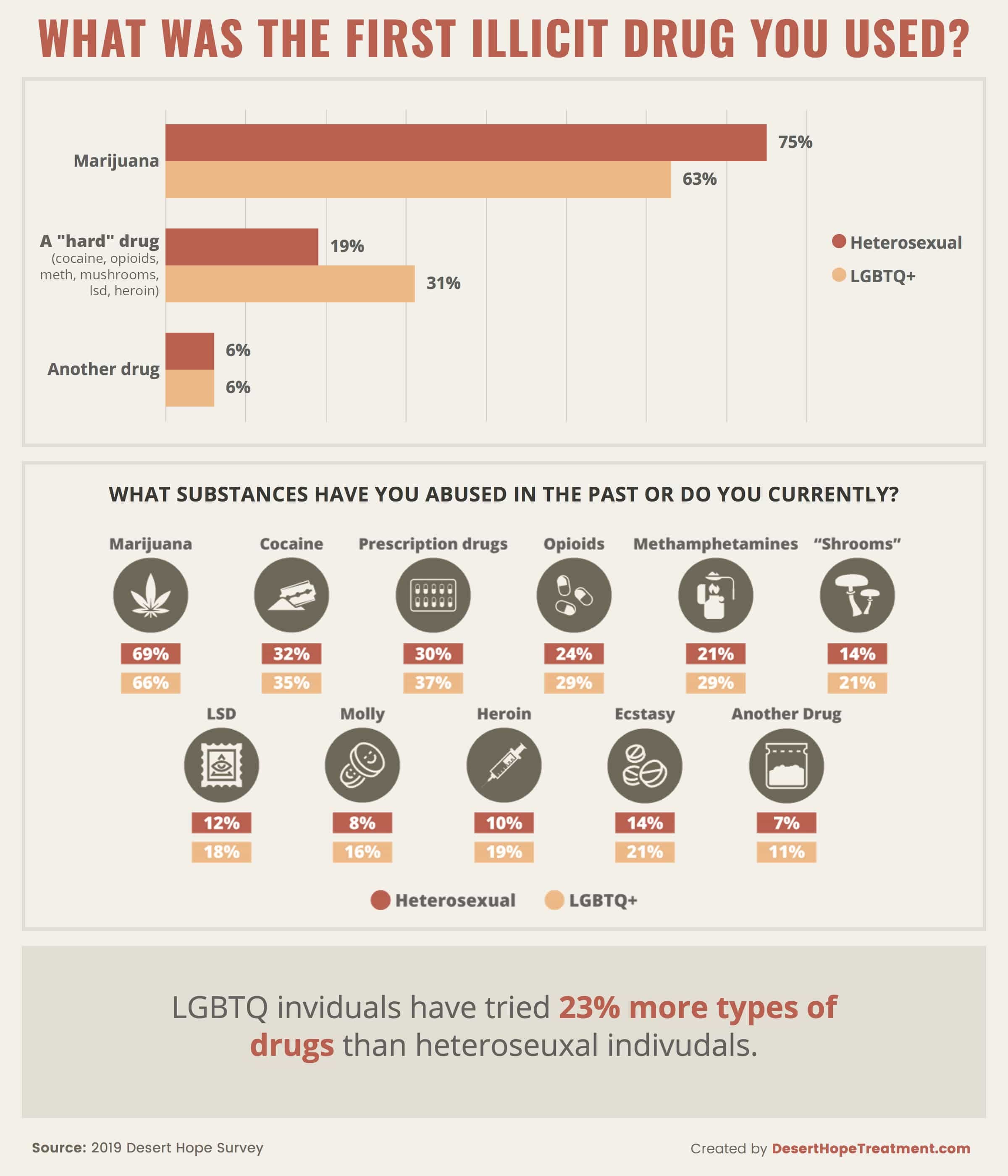 When it came to the specific drugs used, our survey showed that LGBTQ+ individuals start with a harder drug (such as cocaine, meth, heroin, etc.) than heterosexual individuals by a significant margin (31% as compared to 19%). Additionally, members of the community are more likely to try more types of drugs. Our survey found that, on average, an LGBTQ+ person who uses drugs will use 3.18 different types of drugs compared to 2.57 for heterosexual respondents. 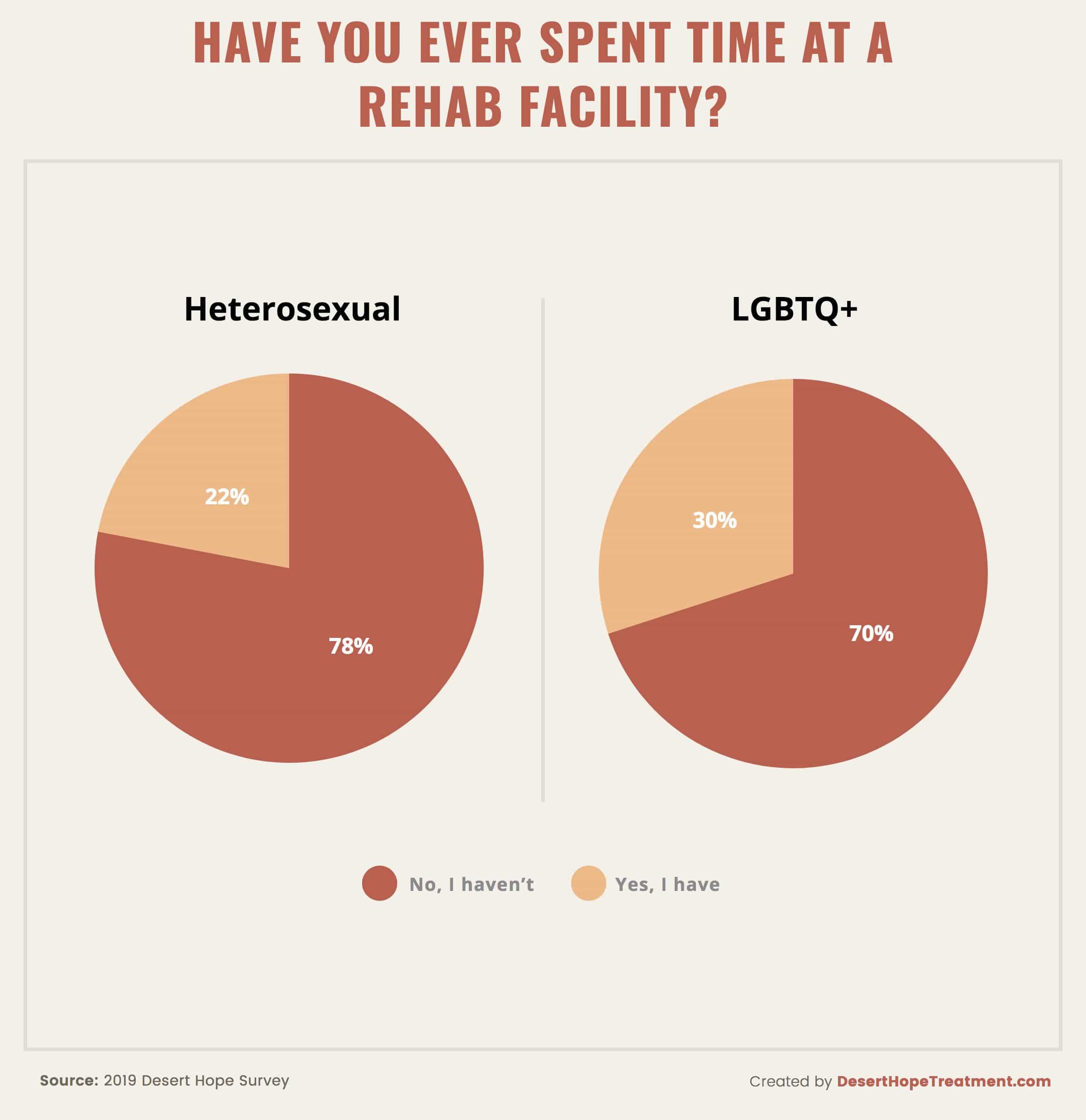 Next, we asked about the reasons that respondents started using drugs. What stood out here was that LGBTQ+ users had a higher response rate of use stemming from depression or loneliness which correlates with studies that have found a higher rate of mental illness among community members. 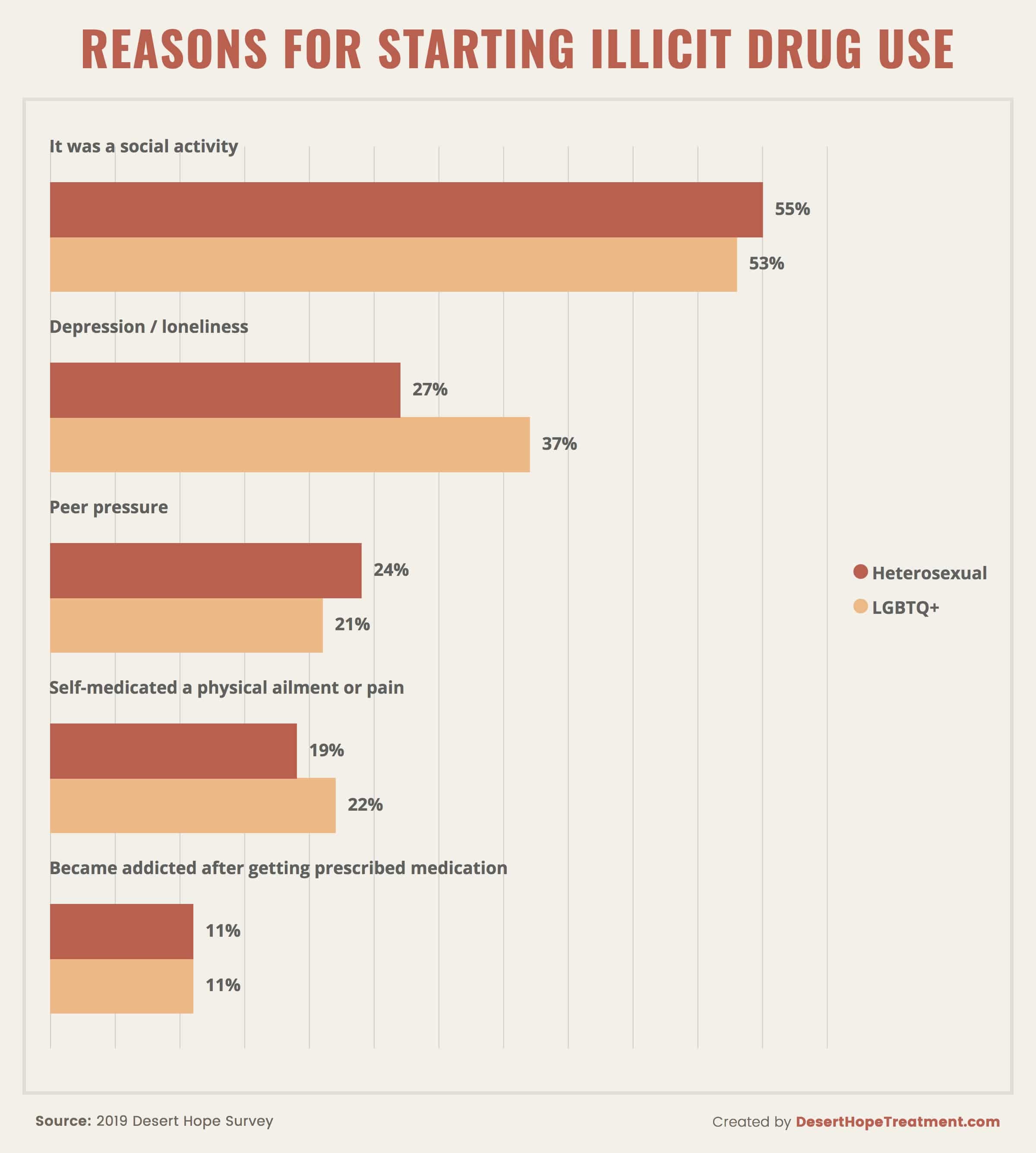 We also asked if respondents had spent time in a rehab facility. 30% of LGBTQ+ respondents said they had spent some amount of time. This was again a higher rate than our heterosexual respondents. 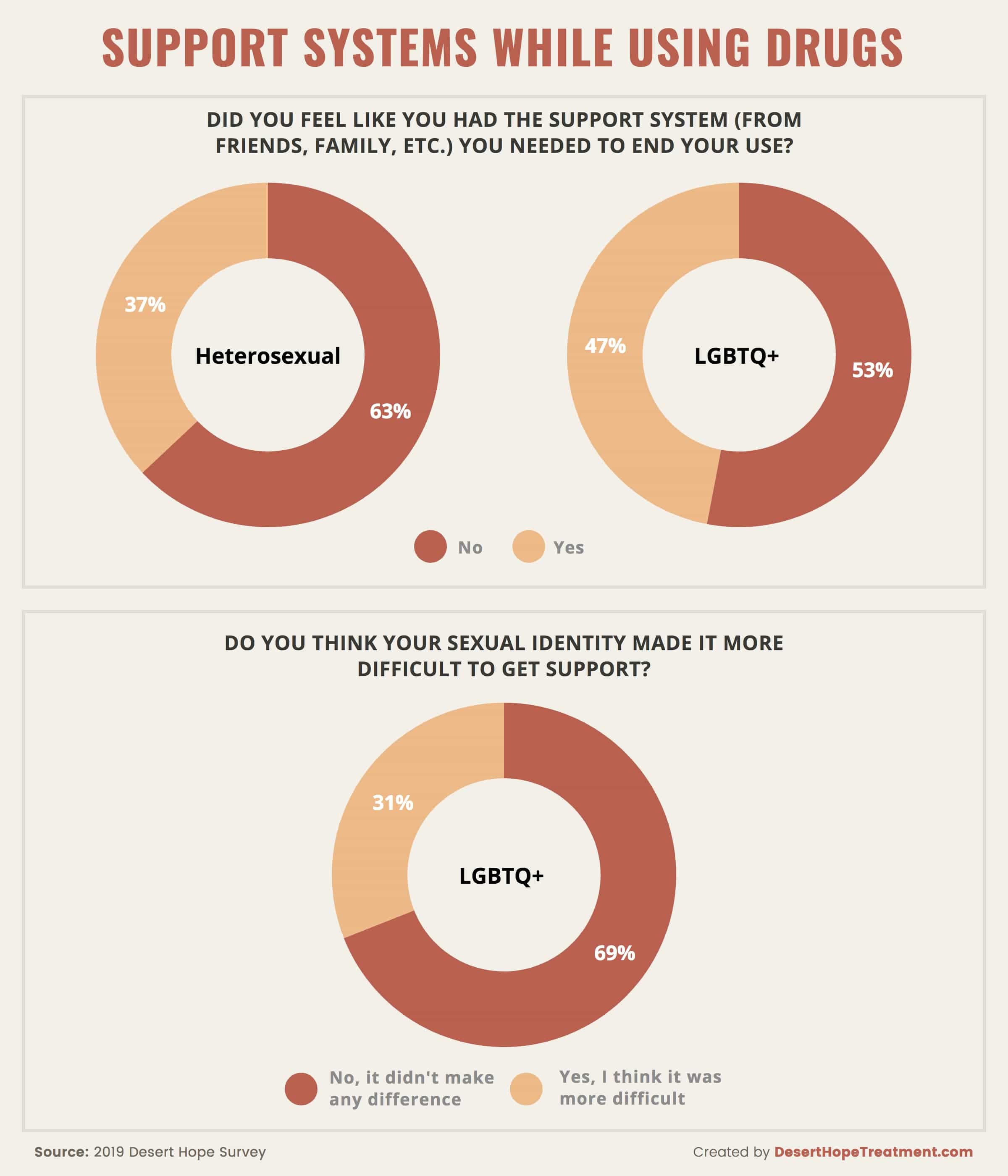 At Desert Hope Treatment, we’re committed to providing a support system and a way for people to get help when they need it. With that in mind, we asked respondents about their support systems and if they felt their sexuality made a difference in their ability to get help. We found that more than half (53%) of LGBTQ+ individuals did not feel like they had a support system when they needed to end their use. Additionally, 30% felt that their sexuality made it more difficult to get the help they needed. These are alarming statistics and ones that we are committed to helping reduce.

Overall, it’s clear that we as a nation face a serious drug use and abuse problem. This problem spans across all ages, races, genders, and sexualities and is one that we need to work together to solve. The LGBTQ+ community, in particular, faces problems from drug use and abuse at a higher rate than other groups and often do not feel like they are able to get the support that they need. We’re aiming to help and one of the first steps is to identify the problems and where the help is needed. Desert Hope and American Addiction Centers are proud to help individuals of all backgrounds when they need it most.

lgbtq
Prefer getting help via text?
We're available 24/7 via text message. Signup below for access to our team when its convenient for you!
and many more...
✕
Instantly Check Your Insurance Coverage
Your information is safe & secure
At Desert Hope, we accept most types of private (non-government) insurance and offer a variety of payment options.
You can quickly and privately check your insurance benefits to see if you're covered for addiction treatment services. We’ll be able to tell you if your provider is in network with Desert Hope Treatment Center and all American Addiction Centers locations.
This means your treatment may be FREE1 depending on your policy, copay, and deductible.
Get the Info & Help You NeedBrowse 100s of informative articles.