What Is Fentanyl Made From? Ingredients, Cutting Agents & Adulterants

Fentanyl is manufactured in pharmaceutical laboratories and in illegal labs. China is a major supplier of fentanyl to the United States, and though it has begun to regulate fentanyl and its derivatives, this has not been easy due to the ability of chemists to alter the formula for the drug.

Is Fentanyl an Opioid?

Fentanyl is a powerful and addictive opioid drug that is used to treat severe pain or pain after surgery, especially in people who have taken painkillers for long-lasting or chronic pain and have developed a tolerance to opioid medications. It is between 50 and 100 times more potent than morphine.1

Fentanyl is a synthetic opioid, which means it is manmade in laboratories. It does not rely on the opium poppy for production like opiates such as morphine. It is produced through a number of chemical reactions that require specialized skills and access to restricted chemicals.2 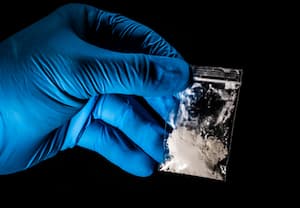 The full chemical formula for fentanyl is N-(1-(2-phenethyl)-4-piperidinyl-N-phenyl-propanamide. The drug is derived from piperidine, an organic compound that is used in the synthesis of many pharmaceuticals. The pharmaceutical industry has developed fentanyl derivatives by manipulating the basic molecule to create various potencies. For example, moving a methyl group into the 3 position of the piperidine ring can increase the drug’s potency.3

These clandestine labs are also beginning to produce carfentanil, a drug used as an elephant tranquilizer in veterinary medicine. Other forms that may appear on the black market include acetylfentanyl and furanylfentanyl. This unregulated process makes fentanyl and its analogues especially dangerous.4

Worried about your fentanyl use? Give us a call at . Every time you use fentanyl or a drug that may be cut with fentanyl, you’re risking deadly overdose. Treatment can save your life.

Dangers of Heroin Cut with Fentanyl

Fentanyl is often found as an adulterant in other illegal drugs because it is cheap and easy to produce.1,5 About 500,000 counterfeit pills can be manufactured from a kilogram of fentanyl, and synthesizing this drug is not difficult for clandestine laboratories.6

It has been recently mixed into heroin or cocaine, or sometimes sold instead of heroin. Since fentanyl has a higher potency than heroin, it greatly increases the risk of overdose for users who are unaware that their dose contains the drug.1,5

People who struggle with heroin addiction and consume fentanyl instead of heroin are likely to take more fentanyl because they think they are taking heroin, and this can be deadly.

China is a major source of illicit fentanyl. The country began to regulate fentanyl and its derivatives after pressure from the U.S. But regulation is difficult. Labs evade authorities by listing fake addresses, and chemists can make modifications to the drugs that mean they are no longer one of the compounds listed as scheduled drugs.4

Get Help to End Opioid Abuse

Fentanyl and other opioids are the leading cause of the spike in overdose deaths in the U.S over the past 2 decades. Two milligrams of fentanyl, which is equivalent to a few grains, is considered a deadly dose.4 A fentanyl overdose can be fatal.

Ongoing abuse and addiction increase the risk of death from these serious drugs, but professional treatment can help.

Many people who use fentanyl develop a physical dependence on the drug in which their bodies come to rely on the substance to function. When they stop taking it, they can go into withdrawal. A withdrawal state can be very uncomfortable and include stomach problems, pain, fatigue, sleep problems, and anxiety.2

Users also often develop a psychological addiction to the drug that may be related to the sensations of the drug or other factors.2

Rehabilitation centers can help people get through withdrawal without relapsing or experiencing any medical problems. They can prescribe medications and offer other forms of support. In some cases, they can help someone gradually taper off fentanyl.

They can also help the person work through the issues in their life that may have led them to use fentanyl. One of the more common forms of therapy used with substance abusers is cognitive behavioral therapy, which helps the person identify their triggers for using drugs.

Don’t wait to get help if you have a problem with fentanyl or know someone who does. There are several types of rehab options available that can accommodate different budgets and lifestyles. If you’re worried about the pain of withdrawal, medical detox can ease the discomfort and help you overcome your opioid dependence safely. You can call for support 24/7 and to learn more about our Las Vegas drug detox treatment center.

A former patient of American Addiction Centers describes her experience with detox and treatment below.

fentanylopiate
Prefer getting help via text?
We're available 24/7 via text message. Signup below for access to our team when its convenient for you!
and many more...
✕
Instantly Check Your Insurance Coverage
Your information is safe & secure
At Desert Hope, we accept most types of private (non-government) insurance and offer a variety of payment options.
You can quickly and privately check your insurance benefits to see if you're covered for addiction treatment services. We’ll be able to tell you if your provider is in network with Desert Hope Treatment Center and all American Addiction Centers locations.
This means your treatment may be FREE1 depending on your policy, copay, and deductible.
Your Next StepsRecovery is possible. We're here to help with your addiction.