Alternative therapies are promoted as being able to support scientifically researched treatments for improving physical and mental health. Color therapy is one of these alternatives that is touted as a way to help people heal, simply by using colors to affect the person’s mental or physical state.

When trying to find the treatments that are most likely to help an individual achieve recovery from mental health disorders, including addiction, it is important to take into account the research and evidence behind each method. For that reason, exploring the science and understanding behind color theory and color therapy can help an individual determine whether or not it is a relevant or helpful treatment for mental health and mood issues. 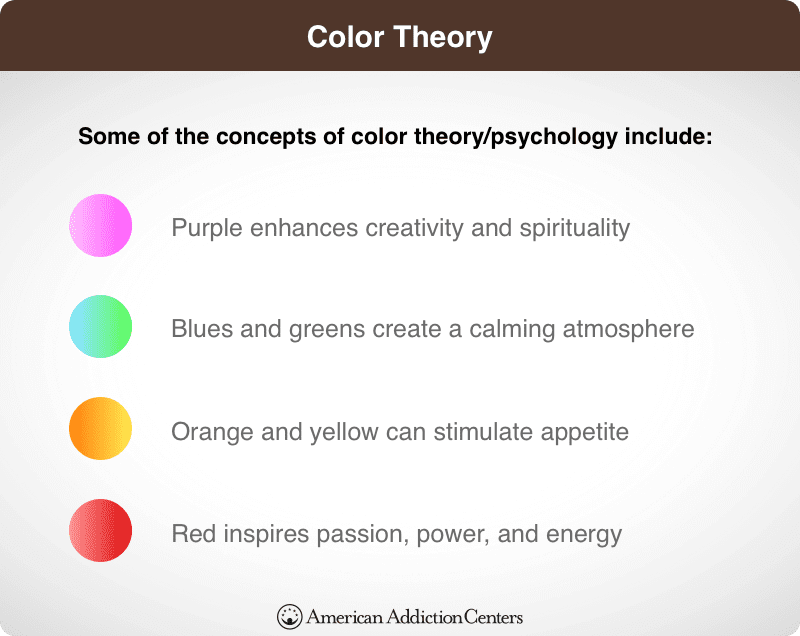 In color theory, every color – from white to black and everything in between – has an effect on how a person thinks, acts, and responds to various stimuli in their world.

How Color Theory Is Used in Healthcare

As an example, hospital settings are often decorated in soothing, cool colors, such as pale blue and green. This is thought to foster a relaxing environment that enables rest, encouraging faster healing.

According to the Art Therapy Blog, the use of color to help people heal goes back to the ancient Greeks, Egyptians, and Chinese, all of whom used color to try to affect the mental states of people through the colors used to decorate rooms, the incorporation of natural colors to induce a calm state, and the use of light to balance mental states. In fact, for at least one condition – seasonal affective disorder, or SAD – research has shown that light therapy can help to mitigate the depression and anxiety caused by the disorder, as referenced by Mayo Clinic.

Similarly, it is believed that different colors can induce specific emotional or mental states that can change mood, the level of anxiety, or the individual’s perception of a situation.

An article in Scientific American discusses the “color cure,” which was first used in a mental asylum at a place called Wards Island in an attempt to cure mental illnesses like depression or melancholy (in bright, red rooms), violent behavior (with calming blue or green), insanity (using purple rooms), or mania (with black rooms).

The results of these color therapies were never fully documented, but various empirical comments note that, for example, red would help a person struggling with melancholy to become more animated and involved in the environment, while pale blue or green would calm someone who was agitated. This is the historical basis behind color therapy, or chromotherapy.

Whether or not color therapy is a valid model, it may be a helpful component of a treatment plan for individuals who feel connected to particular colors. With a research-focused treatment program, the preferences and motivating factors for the individuals involved are taken into consideration in creating a customized plan for the person. Finding the right treatment program for the individual is the first step on the path that is most likely to lead to recovery from the individual’s mental health disorders, leading to a more productive and hopeful future.