Signs of Abuse for Methamphetamines 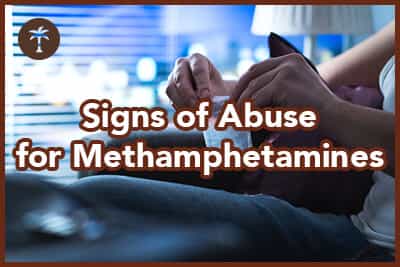 There are numerous versions of methamphetamine, from crystal meth to Ritalin. While they have legitimate medical uses, methamphetamines are also widely abused stimulants that can be very addictive.

In prescription drug forms, methamphetamines have been approved to treat attention deficit hyperactivity disorder (ADHD) and obesity, but people who do not need these prescriptions may struggle with abuse and addiction. Since the increase in ADHD diagnoses in the 1990s, more Ritalin and Adderall were prescribed to young people who needed the medications, alongside behavioral therapy, to manage their condition. Unfortunately, with more prescription stimulants available, more adolescents without ADHD began to abuse these drugs, too.

Children who did not have ADHD assumed that Ritalin and Adderall were solely responsible for improvements in academic performance in their peers, so the phenomenon of “study drugs” began. Unfortunately, many of those adolescents are now in the workplace and continue to misuse and abuse Ritalin and other stimulants to work long hours, get more intense workouts at the gym, and lose weight by curbing their appetites.

Most people are more familiar with methamphetamines as illegal drugs of abuse. The United Nations Office of Drugs and Crime (UNODC) estimates that 500 metric tons per year of illicit stimulants, including meth, are produced and distributed worldwide every year. After marijuana, meth is the most widely abused drug in the world.

Crystal meth is the most familiar form of illicit meth. It looks like a bluish, cloudy, or glass-like shard. Common slang terms for crystal meth include crank, chalk, ice, speed, and crystal. This drug is crushed and abused by snorting, smoking, swallowing, or injecting it after mixing it with water.

Side Effects Associated with Meth Abuse

Stimulants like meth increase alertness, wakefulness, and attention. General effects from any meth-based stimulant, prescription or illicit, include:

The Physical Impact of Meth

When short-term effects from abusing meth occur consistently for a long time, chronic issues can develop.

Intense euphoria, sleeplessness, high levels of activity, and greater wakefulness may lead to hallucinations, paranoia, anxiety, panic attacks, and even psychotic behavior. A person who is high on meth may lose touch with reality, and act aggressively or violently. They may experience paranoid delusions, feel as though they are being watched or followed, and get injured while trying to get away from an imagined threat.

These mental problems can become chronic if meth is abused for a long time. Lasting mental and behavioral changes may include:

Difficulties with thinking, making sound judgments, learning new things, or remembering things may be permanent in some people who abuse meth for a long time. Changes to how the brain releases and processes dopamine can change structures in the brain, so even months or years after a person quits abusing meth, they may feel lethargic, depressed, or physically slower.

Some brain imaging shows that these changes may take a long time to heal, but in many cases, they will not be permanent. The brain’s healing process could take as long as one to two years, but cognitive function will improve.

Depression is another chronic condition that may be triggered by meth abuse, especially in adolescence. Because the stimulant changes how the brain processes serotonin and dopamine, brains that are still forming – from ages 12-25, on average – may be permanently altered by the presence of stimulant drugs. This means that people who abused meth as teenagers or young adults may need treatment for depression for years after quitting the stimulant. Research shows up to 50 percent of dopamine-producing neurons can be damaged by meth abuse, so healing from abuse of this drug can take a long time and involve mood changes or disorders.

Although there are no specific prescription treatments to ease the body off meth addiction, it is important to get medical oversight from addiction specialists to safely detox from this powerful drug. Withdrawal symptoms associated with meth can be very uncomfortable, which may trigger a binge during a relapse; a meth binge can lead to overdose. Someone suffering from a drug overdose needs emergency medical attention, so call 911 in the event that a person displays psychotic symptoms, extremely high body temperature, dissociation with reality and panic attacks, or passes out with a rapid pulse or breathing.

Symptoms associated with meth withdrawal include:

Withdrawal symptoms can be managed with counseling and medication. Withdrawal typically takes 7-10 days; after that point, physical and most psychological symptoms will ease. Once detox has been completed, it is important to continue therapy with an evidence-based rehabilitation program. This will change compulsive behaviors around drugs, help the person learn better stress coping mechanisms, and reduce the risk of relapse.

It is very possible to overcome an addiction to meth, whether the addiction involves a prescription stimulant like Ritalin or an illicit drug like crystal meth. Contact an addiction specialist and enter evidence-based treatment.

methsubstance abuse symptoms
Your Next StepsDon't gamble on your addiction.