At American Addiction Centers, we strive to provide the most up-to-date and accurate medical information on the web so our readers can make informed decisions about their healthcare.

Our reviewers are credentialed medical providers specializing in addiction treatment and behavioral healthcare. We follow strict guidelines when fact-checking information and only use credible sources when citing statistics and medical information. Look for the medically reviewed badge ( ) on our articles for the most up-to-date and accurate information.

If you feel that any of our content is inaccurate or out-of-date, please let us know at ContactAAC@ContactAAC.com.

How Long Does Suboxone Stay in Your System? 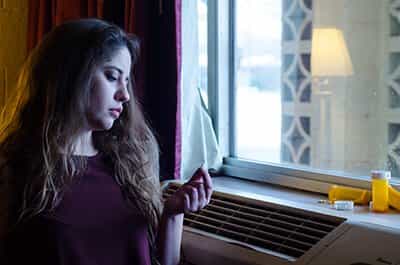 Suboxone is used to treat addiction to heroin and prescription opioid pain relievers.

The medication’s primary active ingredient is buprenorphine – a partial opioid agonist drug that produces similar effects to other opioids such as oxycodone or heroin – though buprenorphine’s effects are weaker. Suboxone also contains naloxone, an opioid antagonist that is meant to decrease the likelihood of diversion or abuse.1

But despite these safeguards, the drug can still be diverted from medical use and abused. Many people abuse Suboxone by injecting or snorting the crushed tablets. The Center for Substance Abuse Research at the University of Maryland reports that there were 21 police seizures of the drug in 2003 compared to 8,172 in 2009. It has been smuggled into state prisons in Maine, Massachusetts, New Jersey, New Mexico, Pennsylvania, and Vermont.2 In addition, the number of emergency department visits related to the nonmedical use of buprenorphine increased from 3,161 in 2005 to 30,135 visits in 2010.3

Does Suboxone Show Up on a Drug Test?

Many people who take Suboxone have concerns about how long it sticks around afterward. The drug can show up on a urine test for approximately 7-10 days and on blood and saliva tests for up to 24 hours.

Worried about your Suboxone use? Take our free and confidential addiction assessment today.

Suboxone Half-Life and Time in System

A drug’s half-life is the period of time it takes for a drug’s concentration in blood plasma to be reduced by 50%.4 The half-life for buprenorphine averages 24 to 42 hours depending on the person.5 Compared to other substances, this is a pretty long time. For example, oxycodone has a half-life of about 3 hours.6

Suboxone can be detected through drug screening tests via blood, urine, saliva, or hair samples. Typical doses of buprenorphine are detectable in the urine for 7-10 days.7 Blood and saliva tests can detect the drug for up to 24 hours.8

The amount of time Suboxone remains in your system can vary depending on the doses along with your metabolism rate.7

Drug metabolism varies from one person to the next and can impact how quickly an individual naturally detoxes from a substance, or how quickly the kidneys and liver can process the drug and the body can then excrete it. Individuals with slower metabolisms may take longer than what the above timeframes suggest, while those with faster metabolisms may detox from the drug more quickly. Thus, there are always exceptions.

Drug metabolism varies from one person to the next and can impact how quickly an individual naturally detoxes from a substance.

The presence of other substances in the system can also impact how fast or slow the body rids itself of Suboxone. This can be concerning for individuals who abuse more than one substance, which is common. It is particularly common among people who abuse opioids, which are often abused alongside benzodiazepines or alcohol. The Journal of Drug and Alcohol Dependence reported 67% of French people in buprenorphine-based treatment plans had used benzodiazepines at some point in their lives, and 54% had within the month prior to being surveyed.9

Suboxone abuse and addiction are manageable. Though it is a treatment drug, the recovery process for abuse of or addiction to Suboxone is the same as it is for other substances of abuse. As with all addictions, treatment should include medical detox and comprehensive therapy.

Dan Wagener, M.A., is a Senior Web Content Editor at American Addiction Centers (AAC). Before AAC, he worked for a government contractor in the Washington, D.C. area, where he edited websites for the Substance Abuse and Mental Health Services... Read More