Physical Impact of Opana Abuse: Dangers of Use 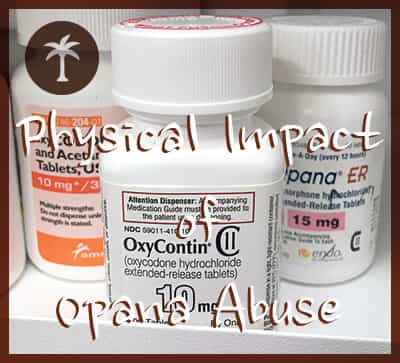 Opana is the most known brand name for the prescription opioid drug, oxymorphone. This medication was prescribed to treat moderate to severe pain, like oxycodone and hydrocodone medications; however, the drug was removed from use in 2017 by the Food and Drug Administration (FDA) due to serious struggles with addiction and overdose associated with it.

The FDA called for Endo Pharmaceuticals to remove Opana ER (extended release) in 2017 after numerous reports of abuse were linked to the drug. In 2012, the pharmaceutical company changed the extended-release formula with the intention of making the drug harder to abuse, in an effort to reduce the number of people struggling with opioid addiction. The new Opana formula should have been more difficult to crush and snort or inject; unfortunately, this reformulation did not work, and the FDA insisted that the drug be removed due to high risks associated with intoxication.

Like other opioid drugs, Opana can lead to side effects even when taken as directed. Common side effects associated with this medication include:

While anyone who takes this medication, either as prescribed or due to addiction, may develop side effects, those who misuse or abuse Opana are at greater risk for experiencing these symptoms. Side effects from abusing opioids like oxymorphone can become chronic. This can lead to damage to the brain and body if medical attention is not sought.

When a person takes opioids like oxymorphone for a long time, the drug can cause damage to major organ systems. This is true even if the drug is monitored by the prescribing physician, but there is a greater risk of harm to those who abuse Opana because they are more likely to ignore symptoms, continue abuse of the drug, and take more of the opioid than would be prescribed.

Many organ systems are damaged by high-dose, long-term opioid abuse.

Taking too much Opana, or mixing this opioid with some other drugs like antidepressants, can induce serotonin syndrome. This condition is caused by too much serotonin, a mood-elevating neurotransmitter, staying in the brain. Mild forms of serotonin syndrome may clear up on their own, but it is important to seek emergency medical attention for any case of the condition, as it can be deadly.

Symptoms associated with serotonin syndrome include:

Because Opana is so potent and addictive, it greatly increases one’s risk of overdose. If a person is overdosing on an opioid drug, including Opana, immediately call 911. The individual needs emergency medical attention.

Signs of an Opana overdose include:

While the Centers for Disease Control and Prevention (CDC) has found that as many as 91 people die, on average, every day from overdose involving opioid drugs, an investigative report recently found that many more people overdose on opioids but survive. The report suggested that three out of every four people who overdose on opioids survive the experience, but suffer long-term damage to the brain and body. Nerve damage, memory loss, cognitive and behavioral changes, and loss of blood flow to limbs, leading to amputation, frostbite, and broken bones are just a few of the lasting issues that may occur among those who overdose on opioids like Opana and survive.

There is help to end Opana addiction. Evidence-based treatments, including medically supervised detox, medication-assisted therapy (MAT), and behavioral therapies in rehabilitation are all available to those who struggle with addiction to or abuse of Opana.