What Are the Withdrawals Associated with Ketamine? 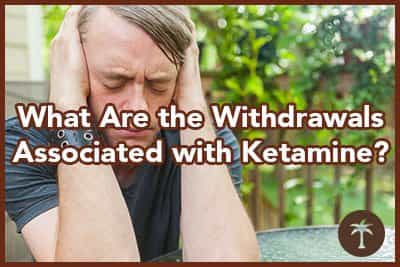 Ketamine was approved for medical use in the United States in the 1970s, and it has been successfully used as an anesthetic and tranquilizer for people and in veterinary medicine. As a dissociative anesthetic, the substance stops memory formation and induces unconsciousness, which is important for surgery or other intense medical procedures. However, since ketamine was listed as Schedule III by the Drug Enforcement Administration (DEA), it has fallen out of favor as a surgical anesthetic.

Ketamine induces a sense of euphoria and relaxation, and it can cause hallucinations, so it has become a substance of abuse at clubs, raves, and concerts. Initially, ketamine was diverted from hospitals and veterinary clinics in the 1970s and 1980s, but more recently, the substance has been imported from clandestine laboratories and sold either in powdered or tablet form, or falsely sold as ecstasy or cocaine.

While addiction to ketamine is rare, thousands of Americans struggle with abuse of this substance. The drug is so potent that the body rapidly develops a tolerance to and dependence on it, and people who abuse it are at high risk of overdosing. However, people who try to stop abusing ketamine without help from addiction specialists may experience withdrawal symptoms. Many of these are anecdotal, as there have not been many medical studies on the symptoms of ketamine withdrawal, but many people have reported this experience and need support to stay away from the drug.

The most common effects associated with ketamine abuse include:

Without medical supervision, it is easy to take too much ketamine. Many of the common symptoms associated with ketamine abuse are also overdose symptoms, so call 911 if these are present. Ketamine overdose can happen rapidly, so someone experiencing this condition needs emergency medical attention right away.

Why Is It Hard to Stop Abusing Ketamine?

Many hallucinogenic drugs are not considered addictive, but ketamine also changes mood-altering neurotransmitters. This can impact the brain’s reward system and quickly lead to addiction. Ketamine binds to receptors in the brain that prevent the uptake of serotonin, dopamine, and glutamate, which are all associated with elevated mood, euphoria, and intoxication. It uncouples neuronal communication between the thalamus and cerebral cortex, so ketamine can change memory, motor function, sensory perception, and emotions. At the same time, the drug also stimulates the limbic system, so motivation and emotional regulation are changed, too.

Hallucinations begin within minutes after ketamine has been ingested, and the changes in neurotransmitter levels can lead to a comedown similar to what is experienced with ecstasy or MDMA; intense depression, exhaustion, and physical discomfort are all associated with the day following too much ketamine. This discomfort has triggered ketamine binges in people who seek the same euphoria they experienced the first time they took the drug.

Ketamine withdrawal symptoms are like those of many other drugs; they are predominantly psychological, including mood swings and intense cravings. The mental and emotional discomfort associated with quitting a substance can lead to relapse if one does not have medical supervision during the process, so it is important to get help from addiction specialists before detoxing from ketamine or any other addictive drug.

The most common ketamine withdrawal symptoms include:

The process of ketamine detox can be very individual. There are no medication-assisted treatments (MATs) like there are for opioid or alcohol abuse, but withdrawal symptoms are likely to last for a week or less. This timeline can depend on how much ketamine has built up in the body. The drug rapidly metabolizes out of the body’s systems, although the effects of one dose may last for a full 24 hours. There are two phases of ketamine inebriation: the alpha phase, when the initial dose takes effect within 10-15 minutes, and the beta phase, which lasts about 2.5 hours.

Even after the drug has metabolized out of the body, changes in brain chemistry and neuron communication can cause poor judgment and loss of physical coordination for several more hours. When a person is given ketamine in a medical setting, they typically have someone supervise them after the dose; if someone abuses the drug for nonmedical reasons, though, they may be at risk of injury or self-harm.

It is not known if the substance builds up in the body over time, but the consistent changes to brain chemistry could make it difficult for someone abusing ketamine to stop taking it.

Call now for a FREE insurance and payment consultation.
Contact Us Today

Although some people who abuse ketamine may do so in large amounts for a long time and never experience withdrawal symptoms, it’s important to get support from addiction specialists. Detox has associated psychological and emotional symptoms, not just physical symptoms, and these mental changes require support just like physical symptoms do.

After detox, one must continue treatment in a rehabilitation program. These programs provide group and individual therapy to promote behavioral changes related to intoxicating drugs like ketamine. With professional help, long-term sobriety is achievable.