Although many new mothers, and even new fathers, experience a period of exhaustion, anxiety, or sadness after a child is born, most new parents feel these symptoms lift after about two weeks. However, some parents develop a condition called postpartum depression: a type of clinical depression that most often develops about three weeks after childbirth. Women are more likely to experience this condition than men, but any parent can develop it. It does not have to occur after the birth of the first child, as many parents experience postpartum depression after their second or third child.

What Is Postpartum Depression and What Causes It? 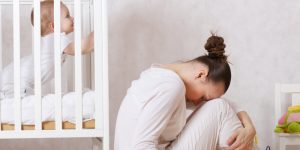 Postpartum depression has many potential root causes. Some of these include:

Early symptoms of the baby blues include:

Postpartum depression can begin at any time after childbirth, up to six months afterward. Symptoms that may continue or get worse include:

The experience of postpartum depression may clear up after several months, especially if the new parent has no previous history of depression. However, the experience can be disturbing, making it difficult to create a new routine with a new child in the family. It can also hurt relationships and the person’s feelings of self-worth. It is important to get help for postpartum depression and discuss the baby blues with a doctor if the feelings are intense.

It is also helpful to know that postpartum depression in both mothers and fathers is much more common than many people assume, even in people who are excited to be parents. This means that the medical community is working harder to understand postpartum depression, associated risks like substance abuse, and how to treat the condition.

Postpartum Depression Is a Common Condition 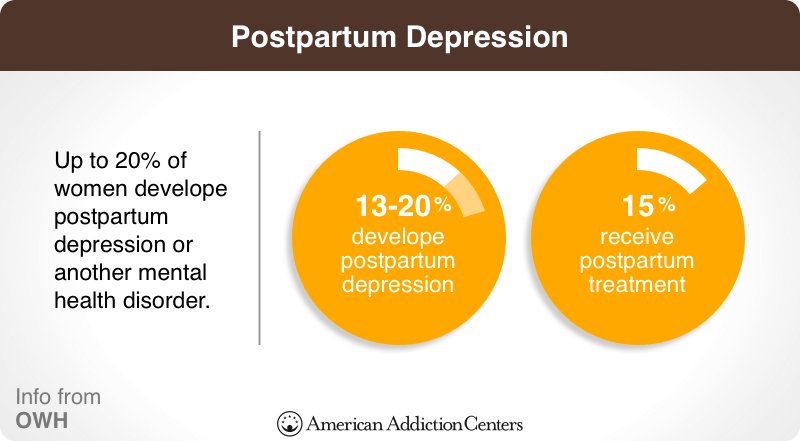 Between 600,000 and 900,000 women develop postpartum depression every year, but only about 15 percent receive the treatment they need to overcome the condition, avoid co-occurring disorders like substance abuse, and integrate their family into their lives.

Depression and substance abuse are highly correlated, and several studies between 1999 and 2012 revealed that women with postpartum depression were very likely to abuse alcohol or illicit drugs. A survey conducted by the Substance Abuse and Mental Health Services Administration (SAMHSA) found that 14.9 percent of women between the ages of 15 and 44 reported binge alcohol use during their postpartum period, and 8.5 percent of that group reported illicit drug use.

A study on alcohol consumption among women with postpartum depression found that 1.5-8.4 percent of these women developed some form of problem drinking. While this was lower than the average among women who were neither pregnant nor postpartum, it reflects a potentially troubling form of self-medication among women experiencing mental health disorders. Breastfeeding complicates any amount of drinking after childbirth. Additionally, women who developed problem drinking were more likely to suffer a longer period of postpartum depression, as found in six-month follow-ups.

A different study examined illicit drug use in the past 30 days among postpartum new mothers. Marijuana consumption was about 4.6 percent; cocaine, including crack, was around 0.6 percent; prescribed psychotherapeutic drugs were abused at a rate of 2.6 percent; and polydrug abuse, or consuming more than one intoxicating substance at a time, was 3.9 percent.

Getting Help for Postpartum Depression

As with other forms of clinical depression, postpartum depression has two facets for treatment: medication and therapy. Working with a therapist for both individual and family therapy, to help both partners, is the first step in treating this condition. This is, in part, because evidence-based treatment like Cognitive Behavioral Therapy helps to change behaviors and one’s understanding of the root causes of mental health problems. It is also an important step for women who are concerned that antidepressants may pass through breastmilk and affect their child; while studies show that this is very rare and highly unlikely, therapy should be considered the main focus of postpartum depression treatment.

The combination of medication and talk therapy has been shown to successfully treat 90 percent of women who pursue help. Complementary treatments can help, such as attending support groups for new parents with postpartum depression. Natural remedies, including some herbal supplements, added vitamins and minerals, exercise, massage, and meditation, may help to ease some symptoms, as long as a doctor is consulted before pursuing these treatments.

New parents who receive social support and screening for potential postpartum depression are more likely to experience positive outcomes. Crisis hotlines, reaching out to friends or family, or even calling 911 if obsessive thoughts of harm, to oneself or one’s child, occur can prevent devastating outcomes and get new parents the introduction to treatment they need. Friends and family should reach out if they are concerned that a new mother or father in their lives is struggling with postpartum depression, anxiety, or substance abuse.

People struggling with substance abuse who may become pregnant or want to become pregnant should ideally get treatment for the condition before beginning a new family. If a woman is abusing substances and becomes pregnant, professional assistance is imperative to ensure the health of mom and baby.

Ready to get started?
We're available 24/7 to answer questions and help you make decisions about starting recovery from drug use.
Your Next StepsDon't gamble on your addiction.