College is said to be one of the best times of your life, and for good reason. It’s the first time in a young adult’s life where they feel truly independent, so they are liable to make bold decisions, both good and bad, that will impact the next several years of their lives. Some of those decisions can unfortunately relate to illicit drug use.

College campuses are often seen as a breeding ground for potentially addictive behaviors. Because of this, our team wondered just how prevalent drug use is on college campuses. To find out, we surveyed people from around the country about their college experiences as it related to drugs to find out how common drug use and abuse was during their undergraduate career. If you’re interested in learning more, keep reading. 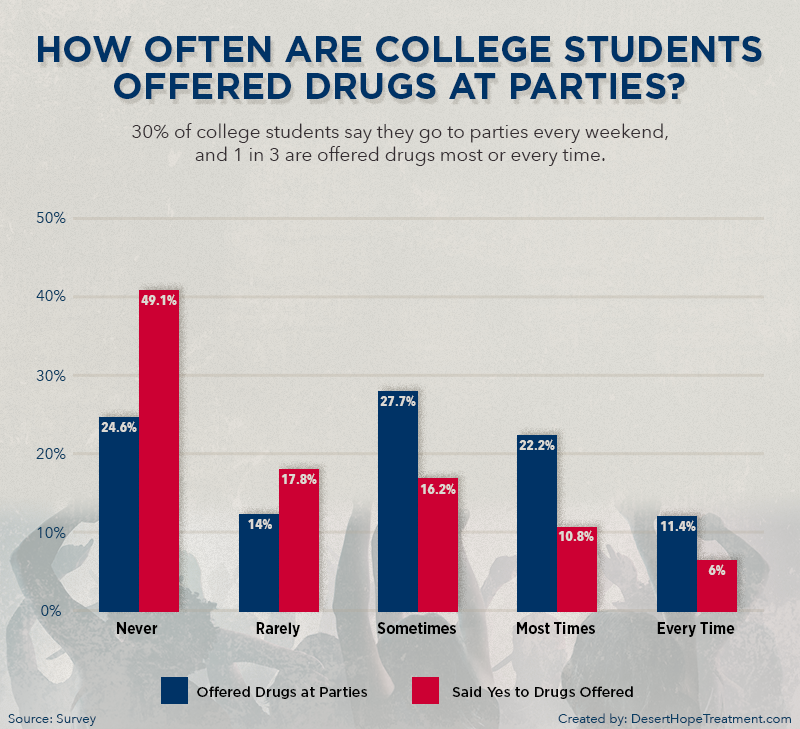 The college experience is known for its abundance of parties, and it’s estimated that 30% of college students go to parties every single weekend. Given this statistic, we wondered how often drugs are offered to those students and whether or not they accepted the offer. Of the respondents, 24.6% said they had never been offered drugs at a party, 27.7% had sometimes been offered drugs, and 11.4% had been offered drugs every time.

We also asked how they responded if they were offered drugs at parties. Surprisingly, 49.1% of them said that they have never accepted any drugs they were offered. College is typically considered a time to experiment, so it’s a bit shocking – in a good way, of course – to learn that almost 1 in 2 people refused drugs. On the other end of the spectrum, 6% of the people surveyed answered that they would always accept drugs if they were offered them. 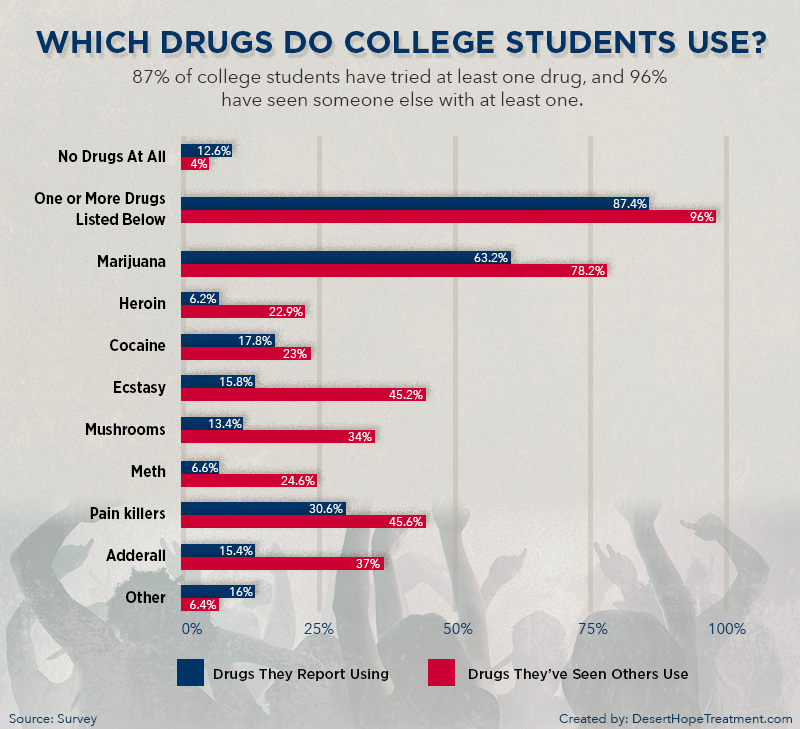 Now that we know that college students are being offered drugs at parties, we’re interested to see which drugs they were exposed to. We split this data into two sets: which drugs a person reported using and which drugs students have seen other people take.

Focusing on the first question, we found that the most common drug among students is, by far, marijuana with 63.2% answering that they’ve used it. In fact, the next-closest drug, painkillers, was reported to be over 30% less common for students to take. The least common drug that students reported using is heroin which accounted for 6.6% of respondents that used drugs. 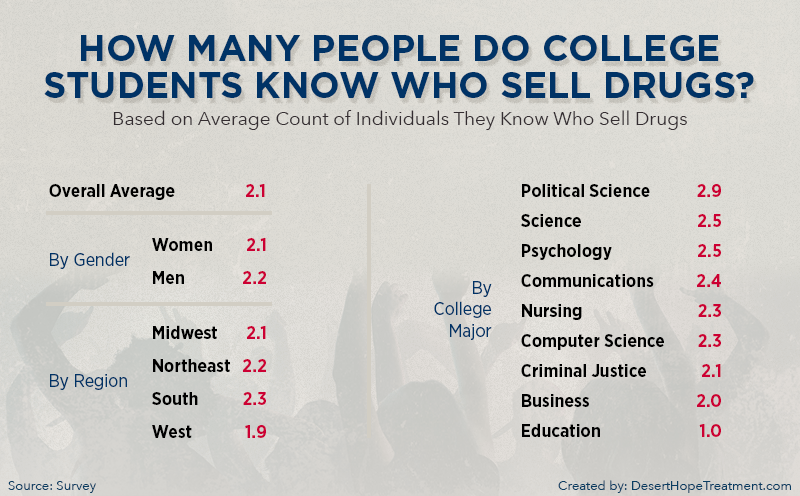 Even though most people get drugs from friends or family, that’s not the only place college students are getting their substances. On average, our respondents knew a total of 2.1 drug dealers, with the Northeast having the highest average overall with 2.5. Interestingly, when we asked which college major reportedly knew the most drug dealers and, we found that Political Science took the top spot. 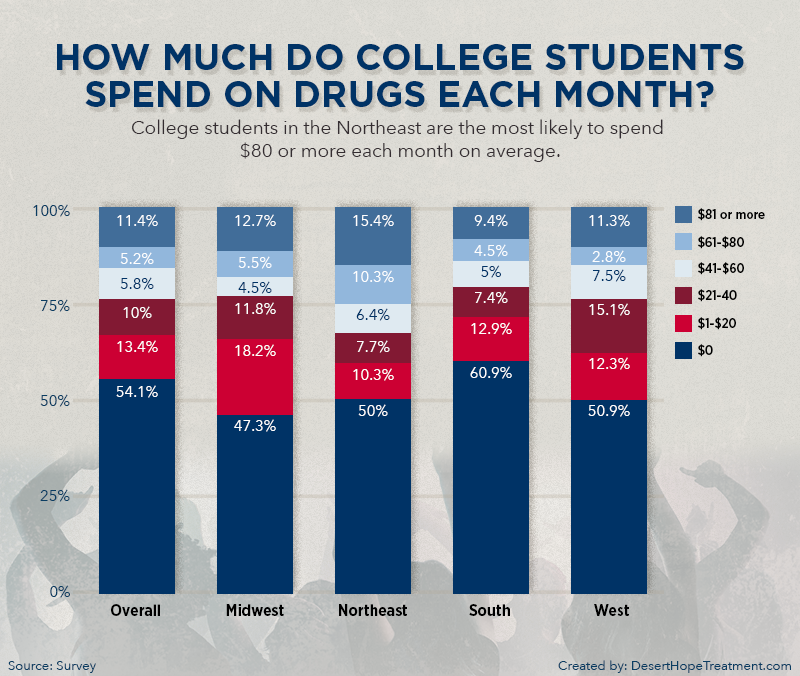 Lastly, we wanted to take a look at how much our respondents tended to spend on their substances each month. Overall, we found that over half of them, 54.1%, didn’t spend any money on drugs. So, they either did not take them or they received them for free (we’re going to hope that it’s the former).

Another insight we found was that students from the Northeast were more likely to spend $80 or more per month of drugs, which is the largest percentage for that range.

College is a time where you should be learning a lot and making memories that will last a lifetime and illicit drug use can affect those great times in a negative and lasting way. If you are a loved one is facing a drug dependency, we can help. Read about our Las Vegas, NV treatment center here to learn more.

CAN I USE THIS INFORMATION?

Get Help for Addiction during Coronavirus

We remain open and committed to supporting your recovery journey. Desert Hope is taking every precaution to ensure patient and staff safety. We are able to test incoming patients and anyone feeling unwell to ensure peace of mind and focus on addiction treatment. Desert Hope is a beautiful oasis with modern charm located in Las Vegas, Nevada. We provide all levels of care from detox, in-patient, outpatient and sober living.

One size treatment doesn't fit all. We will tailor treatment to your needs.

Traveling for healthcare & essential services is permitted across the US. Addiction treatment is essential, and we are here for our patients in this difficult time.